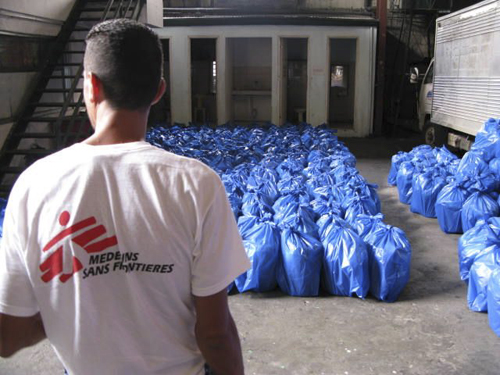 In recent weeks, Southeast Asia and the South Pacific have been hit hard by earthquakes, typhoons and extensive floods. More than 60 surgeons, doctors, nurses, logisticians and others personnel from Doctors Without Borders/Médecins Sans Frontières (MSF) are currently taking part in the extensive aid response to the natural disasters in the Philippines, Indonesia and in the Samoan Islands, trying to provide relief to isolated areas.

The Philippines was in the past two weeks severely affected by a tropical storm and a typhoon, both of which claimed many causalities and caused extensive material damage. An MSF team is currently assessing the situation in Tuguegarao, a provincial capital in the north of the country, where Typhoon Parma killed 15 people on October 3.

The floodwaters have now started to recede and many people are returning to their homes.

Other MSF teams are focusing on Manila city and surrounding areas one week after Tropical Storm Ketsana made landfall. According to official figures, the flooding from Ketsana killed 300 people and displaced 320,000 in and around Manila. The floodwaters have now started to recede and many people are returning to their homes. However, some places are still submerged and it could take months for all the water to clear. A mobile clinic and distribution of relief items has been set up in Laguna Bay, southeast of Manila, an area still partially flooded. The scale and topography of the region makes it difficult to reach communities who may be in need of urgent assistance and MSF teams are using helicopters and boats.

In Manila and surrounding areas, where 505 evacuation centers have been set up by national authorities, two mobile MSF clinics are providing around 70 medical consultations daily. The main diseases are diarrhea and skin infections. MSF medical teams have set up surveillance monitoring in order to respond to possible outbreaks of water-borne diseases or respiratory tract infections.

“After every major natural disaster, alarm calls have been issued regarding major epidemic risks,” says Jean Rigal, a MSF medical director. "There are rarely epidemics immediately after a natural disaster. But they can still occur later if the disease was already present, if access to health care and to drinkable water has deteriorated and where people are forced together in the restricted space of temporary camps. That’s why a monitoring system is needed.”

MSF has dispatched 40 surgeons, nurses, psychologists and logisticians to assess the medical needs in Padang, the capital of Sumatra, and in neighboring Pariaman, where close to 90 percent of the houses have been destroyed

In Indonesia, a major earthquake hit the island of Sumatra on September 30. According to official estimates, 704 people were killed and—a week after—somewhere between 1,000 and 3,000 are still unaccounted for. MSF has dispatched 40 surgeons, nurses, psychologists and logisticians to assess the medical needs in Padang, the capital of Sumatra, and in neighboring Pariaman, where close to 90 percent of the houses have been destroyed. Around 800 severely injured people and 2,600 with minor injuries are in need of treatment. However, there seems to be adequate access to medical assistance for now. MSF teams are focusing on the potential needs in the surrounding rural areas and starting to set up mobile clinics and distributing relief items. MSF is also in the process of sending 45 tons of medical and relief materials.

On the Samoan Islands, a powerful earthquake hit and triggered a tsunami on September 29, which swept across several South Pacific islands, killing at least 189 people. A small MSF team, consisting of a coordinator, a water and sanitation specialist and a psychologist, has visited the south coast of Upolu Island between Lalomanu and Fusi villages to carry out an initial assessment. A significant part of this coastal stretch took the full impact of the tsunami. Another team is visiting Manono Island, west of Upolu. Accessible only by boat, this area has so far not received any assistance from aid organizations.