South Sudan: "These People Tell Us That They Are Desperate" 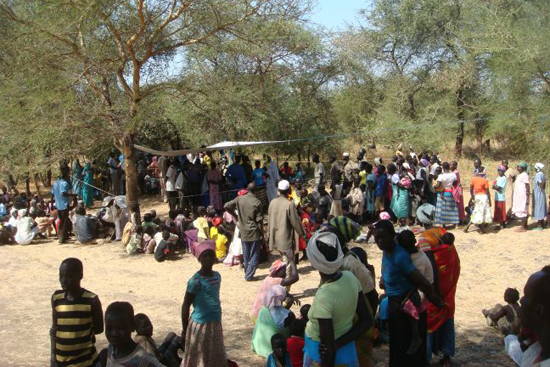 Some of the thousands of refugees in Doro.

Robert Mungai Maina, from Kenya, has eight years of professional experience as a clinical officer. He has worked with Doctors Without Borders/Médecins Sans Frontières (MSF) in South Sudan for the past five months, and was assigned to the emergency team working in the Doro refugee camp last week. Here, he describes what he has seen.

“Many of the patients that we see in our clinic have respiratory diseases. This is because most of the refugees are sleeping outside without anything to cover themselves.

And there are many patients with diarrheal diseases because for the past weeks there were no latrines and there is not enough water. Today we had four cases of bloody diarrhea and many more cases of watery diarrhea.

We are also seeing malnourished children, some with moderate and some with severe malnutrition. They don’t come with any particular complaint. You have to spot them. The child might come with diarrhea or a cough but the mother will not say to you, “this child is malnourished.” So we do the MUAC test, the criterion that we use for detecting malnutrition in children. We measure their middle upper left arm using a measuring tape with a colored scale.

Yesterday I did a consultation with a mother who had one-year-old twins, both coughing and with fever. They both had severe malnutrition. She is still breastfeeding but doesn’t have enough milk because she’s not feeding herself well. She is just eating sorghum mixed with hot water to make a porridge, which is carbohydrates, nothing else.

We started both of the twins on specially formulated therapeutic food and one of them, who has frequent diarrhea, we started on ORS (oral rehydration salts) and zinc sulphate. We told the mother to come back after four days to collect more of the therapeutic food for the twins. We need to monitor them very closely. She is living alone in the camp with the twins and four other children.

This crisis is really bad. These people tell us that they are desperate. For some, it’s been three weeks that they have been walking here, sleeping outside, having nothing to eat. Children, women, men. We have gone around the camp and we estimate about 30 percent are children under five. Mostly it’s women and children who are in dire need of very basic things. We’re here to provide healthcare, but with our water and sanitation team we are also digging latrines, preparing to supply water, trying to meet the immediate needs.

I try my level best to do what I can do for them. Those who are sick, we take care of them and do the follow-up to make sure they get the right treatment. I tell them to come back any time they have a medical problem. That’s what we are here to do.”

Read about MSF’s emergency response to this refugee crisis here.