This year, MSF has witnessed a worrying deterioration in the situation in the semi-autonomous region of Southern Sudan, with severe medical humanitarian implications for the population. 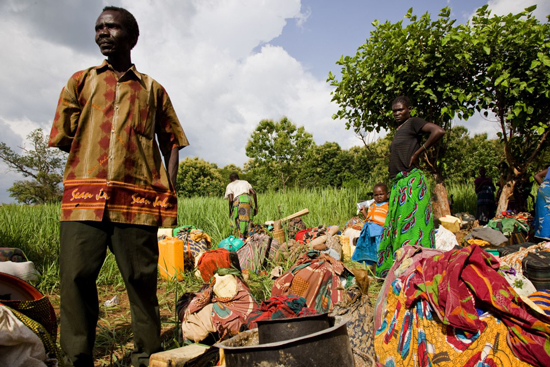 A group of displaced people arrive at a camp after fleeing their village when the Lord's Resistance Army rebel group attacked a neighboring settlement. 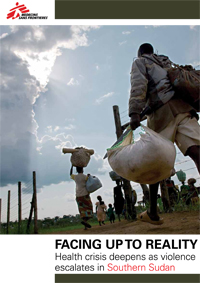 In 2009, Doctors Without Borders/Médecins Sans Frontières (MSF) witnessed a worrying deterioration in the situation in the semi-autonomous region of Southern Sudan, with severe medical humanitarian  implications for the population. Though challenges occur within the context of Sudan as a whole, we will focus solely on the worsening situation in the South in this report.

Since December 2008, there has been a disturbing escalation in violent clashes across Southern Sudan, from attacks by rebel group, the Lord’s Resistance Army (LRA) in the Equatorial states to the so-called ‘tribal clashes’ in Upper Nile, Jonglei, Lakes and Central Equatoria states. The intensity and targeted nature of the violence to which MSF responded in Jonglei and Upper Nile states represents something more than ‘inter-tribal cattle rustling’ and suggests a targeting of villages.

This trend in violence has resulted in death, injury, and the displacement of thousands from their homes. Displaced people are then forced to live in precarious conditions where diseases thrive, leading to outbreaks such as cholera, and heightening the risk of malnutrition. This increased violence and its consequences compound the already grim medical humanitarian situation in Southern Sudan, where medical needs are critical. Mortality rates remain high, malnutrition is chronic, and regular outbreaks of preventable diseases, such as meningitis, measles and cholera, continue to pose a persistent threat to the lives of the population.

In January 2010, Sudan will mark the fifth anniversary of the signing of the Comprehensive Peace Agreement (CPA), which ended 21 years of violent war in which an estimated two million people died from conflict or disease, and four million people were displaced.1

Before the war, Southern Sudan had a severe lack of general infrastructure and health systems, and the decades of conflict destroyed what little existed. At present, it is commonly estimated that up to 75 percent of the population have no access to even the most basic healthcare.2 Non-governmental organizations (NGOs) are providing 86 percent of the available health services in Southern Sudan and are paying the salaries of three quarters of the health staff.3

Another serious barrier to survival is the near-total lack of secondary and tertiary level medical provision, even in many of Southern Sudan’s major cities. Today, the disturbing reality is that the population of Southern Sudan remains mired in a worsening medical and humanitarian crisis following the most violent year since the signing of the CPA. Yet, despite this reality, many governments’ approach to addressing the needs in the South is from a ‘postconflict’ development perspective. Consequently, international donors have focused their response on establishing pooled funding mechanisms to address the chronic underdevelopment of the south and to support the establishment of the Southern government. Although development is important and necessary in Southern Sudan, it is essential that emergency needs are also addressed.

MSF considers that the most effective way of achieving this is through independent humanitarian aid that is wholly separate from the political or military considerations of the CPA. However, it is clear that despite the increasing numbers of emergencies this year, inadequate consideration has been given to ensuring that the immediate humanitarian needs of the population are met.