MSF is responding to outbreaks of kala azar—a severe parasitic disease—in Southern Sudan. The emergency is in several locations across the eastern part of the region, and MSF is treating patients in its clinics in Pibor and Lankien, both in Jonglei State, and using mobile teams in Rom, in Upper Nile State, to actively trace patients. 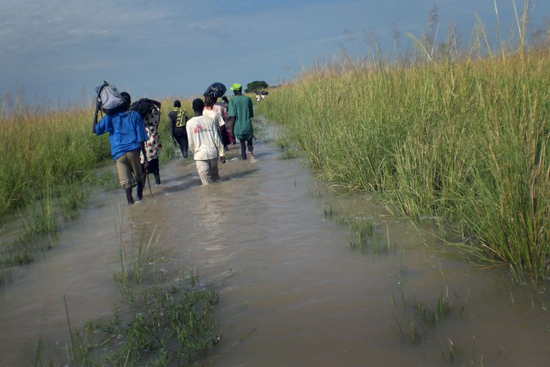 MSF teams walk to health posts to provide medical care in Jonglei State. During the rainy season, which continues through the Fall, reaching many of these sites requires wading through water or using boats.

Doctors Without Borders/Médecins Sans Frontières (MSF) is responding to outbreaks of kala azar—a severe parasitic disease—in Southern Sudan. The emergency is in several locations across the eastern part of the region and MSF is treating patients in its clinics in Pibor and Lankien, both in Jonglei State, and using mobile teams in Rom, in Upper Nile State, to actively trace patients.

"Without treatment, those infected with kala azar become skeletal and can die within weeks if their immune system is already weakened,” said Dr. David Kidinda, MSF medical coordinator. “In Southern Sudan, where almost three-quarters of the population have no access to even the most basic health care, it’s a race against time to reach patients.”

Kala azar, or visceral leishmaniasis, is a neglected tropical disease, endemic in some parts of Southern Sudan. It spreads quickly and easily during an outbreak and thrives in poor, remote, and unstable areas where there is extremely limited access to health care. Kala azar is contracted through the bite of a sandfly that carries the parasite. The parasite then multiplies inside the body, attacking the immune system. Symptoms include an enlarged spleen, fever, weakness, and wasting. It demands quick diagnosis and treatment, and, if left untreated, it is fatal in almost 100 percent of cases within one to four months. However, if patients access treatment on time, there is a success rate of up to 95 percent.

“We suspect that the numbers of kala azar patients reaching clinics in some areas are just the tip of the iceberg,” said Dr. Kidinda. “With all the barriers facing people here—the severe lack of infrastructure, few proper roads, crippling absence of healthcare staff and structures and the current increase in violence and insecurity in the region—survival becomes a cruel obstacle course for those in need of lifesaving treatment.”

Jonglei State is the most affected area, with reports of 275 kala azar patients being treated by a local non-governmental organization (NGO) in Old Fangak clinic in the northwest. In its remote health center in Pibor, MSF has admitted 24 kala azar patients, two of whom died, having accessed health care too late. The patients in Pibor clinic were infected in the cattle camps in the north of the state before moving back to their villages around Lekwongole, in the northwest of Pibor County. Patients must make their way to MSF’s outreach health post in Lekwongole, as MSF teams are currently unable to access these villages due to insecurity and road inaccessibility. MSF then transports the patients to Pibor by boat, as roads have become rivers.

MSF has admitted an additional 46 kala azar patients to its clinic in Lankien. Further north, in neighboring Upper Nile State, MSF has deployed an outbreak response team to screen people across Rom, where 37 patients are being treated.

MSF is not only providing direct treatment for the disease, which involves one injection per day for 30 days, but is also giving supportive treatment for dehydration and anemia, and for other diseases affecting some kala azar patients, such as malaria. In addition, MSF is providing food to patients and distributing mosquito nets and soap, and is starting health promotion activities in Jonglei State to raise awareness of the disease and encourage more people to seek treatment.

MSF has been working in Sudan since 1979. Currently, MSF has projects across Southern Sudan, and in Abyei, Southern Kordofan, and Red Sea states, and in North Darfur. MSF is an independent and neutral organization that provides medical aid to all people, regardless of race, or political and religious affiliation.