Fighting during March and April in Jonglei State has caused death, injury, and displacement 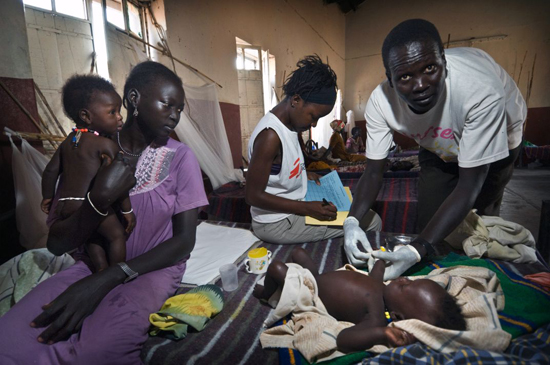 Following recent outbreaks of violence between rival ethnic groups in Jonglei State in Southern Sudan, Doctors Without Borders/Médecins Sans Frontières (MSF) teams are treating wounded from each side, assisting those who fled their villages, and treating malnutrition and cholera.

Inter-tribal raids between various groups across Jonglei State have escalated in recent months, resulting in hundreds of deaths and the displacement of thousands of people. Two brutal clashes occurred in March and April in Pibor and Akobo counties, causing a reported death toll of 600, many of them women and children.

On April 21, MSF medics assisted staff at the Akobo hospital to treat 36 new wounded, most with gunshot injuries. Seven children were among the patients. Eight patients were flown to the MSF-run Leer hospital, for further surgery.

“Nearly all the patients tell us they lost family members in the violence. We heard horrific stories; women and children were attacked and killed in their homes and children were also kidnapped,” MSF medical coordinator Dr. Jonathan Novoa said in Akobo County. “Many patients had multiple gunshot wounds. A 10–year-old boy had three bullet wounds to both his legs. One mother we treated had lost five children and her husband. She managed to escape with only her smallest baby who had been shot in the arm; both survived and made it to the hospital. The wounded and their families are suffering from the trauma of the attacks. Their homes have been burned, along with their food stock. The people who managed to flee have nothing with them; they ran for their lives so they couldn’t bring any clothes or cooking pots. They sleep outside.”

More than 15,000 people have already arrived in Akobo. Now is a crucial time to get food and other items to these displaced families, as transport to the area has only recently become possible by road, due to swampy terrain. With the current rains, this access is likely to last only a matter of weeks. MSF teams have supported Akobo hospital with medical supplies, mosquito nets, and blankets for the wounded. As there is not enough food to feed the patients and their families, MSF teams also purchased some food supplies locally. 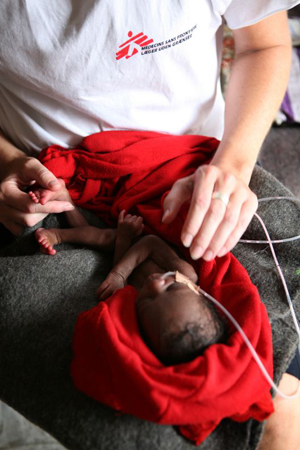 After early March attacks in Lekwongole, Pibor County, on the opposite side of Jonglei State, another MSF team evacuated the injured to Pibor hospital. There, MSF treated more than 40 patients for violent trauma resulting from gunshots. MSF also flew 22 of the most seriously injured to hospitals in Juba and Boma for urgent surgery. Nine of the wounded were children; six of them were under five years old.

Dr. Catherine Van Overloop, medical coordinator for MSF in Pibor County, explains. "Even up to 10 days after the attacks on Lekwongole, wounded people were still arriving in our clinic. They had been hiding in the bush, too afraid to move. Fearing more attacks, they didn’t dare seek the medical treatment they urgently needed, so they reached us when their wounds were even more infected. For days after the attacks, the women in Pibor were too afraid to ever leave their children alone, in case there was another sudden clash and the children were killed or taken. They brought them absolutely everywhere with them, even to work, carrying them on their backs, afraid they might have to suddenly flee."

The Lekwongole attacks displaced more than 5,000 people, who fled to Pibor town. Families in the area took many of them in, sharing their homes and food. However, since the March attacks there has been a worrying increase in admissions for malnutrition to MSF’s therapeutic feeding program in Pibor. While this is the traditional “hunger period” in Pibor County, when food stocks start to wane before the new crops are harvested, the levels of malnutrition MSF is currently seeing are the worst in three years for this time of the year.

Without access to the fields back in their villages, the displaced are the most affected by malnutrition. Since the March attacks, patients who fled their villages make up more than half of the 247 new admissions to the MSF feeding program in Pibor.
This year, the usual transportations of food rations by other agencies to Pibor were seriously hampered by insecurity. Rising malnutrition is thus a significant worry, as both residents and displaced people in and around Pibor have no access to additional sources of food. Following the marked rise in malnourished patients, MSF lobbied the UN and the World Food Program. This week 17 trucks of food supplies arrived.

In the last fortnight, MSF teams treated 43 cases of acute watery diarrhea in Pibor. Many of the displaced have little access to clean water, thus obtaining their water from nearby rivers. Two of the samples sent to a laboratory confirmed this is an outbreak of cholera, a highly contagious disease caused by poor sanitation. As a result, MSF has brought in a new doctor and four nurses to deal with the outbreak, and is treating patients in its cholera treatment center.