In Northern Bahr el Ghazal, families returning to southern Sudan after the end of a 21-year-civil war face innumerable hardships, including a lack of food and continued violence. 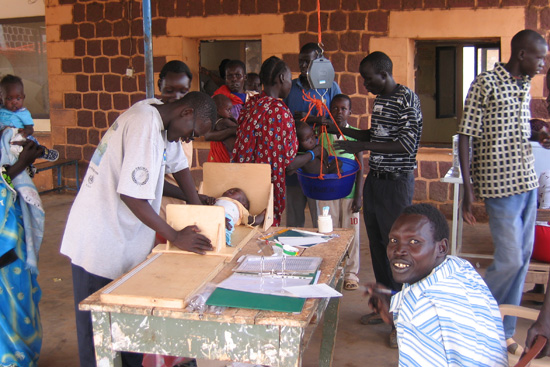 MSF staff assess whether children are malnourished in an outpatient treatment center in Aweil Civil Hospital.

Peace did not last long for Ayelle* and her family. After fleeing Sudan’s brutal civil war to South Darfur ten years earlier, she returned to the southern Sudan village of Majong Yienthu in Northern Bahr el Ghazal state near the end of 2007. Just a few weeks later, though, her family was displaced yet again by fighting that erupted along the contested North-South border.

Since then, her family has struggled to survive day in and day out, living in a makeshift hut at a site with hundreds of other families near the village of Mathiang Dut Akot. With her emaciated child in her lap, she described the difficulties she encountered to find food, living mostly on bitter ground nuts and leaves collected during the day. 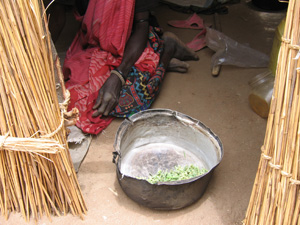 A woman in Mathiang Dut Akot prepares leaves to boil. Many displaced people in this area say they survive mostly on leaves and ground nuts.

Ayelle’s is just one of many families enduring a difficult season in Northern Bahr el Ghazal, where a series of crises over the past year has strained an already fragile community slowly emerging from decades of war. In addition to sparking a fresh wave of displacement, the fighting earlier this year between northern-backed militias and the Southern People’s Liberation Army crippled trade to the region – prices spiked and commodities decreased in the markets, especially in the state capital, Aweil Town.

Severe floods caused in part by the lack of appropriate drainage for a newly built road wiped out most of the area’s staple crop, sorghum. And since the Comprehensive Peace Agreement was signed in 2005, hundreds of thousands of people have returned to the region from South Darfur and North Sudan after years of displacement, rapidly expanding the population in an area with scarce resources. The cumulative toll from these shocks has been a general food insecurity and a high number of malnourished children.

“In Aweil Town and the surrounding areas, more children need treatment for malnutrition earlier in the year than is usual,” said Caroline Seguin, a French nurse serving as Field Coordinator for the Doctors Without Borders/Médecins Sans Frontières (MSF) project in Aweil. “Since this is even before the onset of the traditional ‘hunger gap,’ we are preparing to treat 5,000 children.” 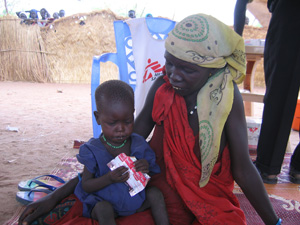 While her mother watches, a child eats Plumpy’nut, a ready-to-eat-food (RUF) product for children who are malnourished or in danger of becoming malnourished, at an MSF clinic in Mathiang Dut Akot.

More than 250 children were admitted for treatment in the third week of April. Overall, MSF medical teams were treating nearly 1,400 children for malnutrition at outpatient treatment programs (OTPs) in Lieth, Rumerol, and Mathiang Dut Akot as well as in Aweil Town itself. Approximately half of the children are from recently displaced or returned families and half from Aweil Town residents, and MSF provides inpatient care for children with additional medical complications at Aweil Civil Hospital.

At the hospital, MSF also provides Obstetric and Gynecology (ObGyn) care for pregnant women in close cooperation with the Ante Natal Care (ANC) Clinic run by the State Ministry of Health. In a recent two-week period, medical personnel treated and discharged 149 pregnant women, including an average of 5-6 women per week with severe complications. The ObGyn program is also receiving referrals from all counties in Northern Bahr el Ghazal state.

“Maternal mortality rates in southern Sudan are among the highest in the world,” said MSF’s obstetrician, Dr. Philip de Almeida. “Based on the present caseload, it is reasonable to expect that this program can help avert more than 250 maternal deaths in 2008.”

As April ended, trade in Aweil Town was slowly increasing to its previous levels, even though the main roads to the North were still cut off. Most traders were bringing in goods by truck from Nyala, in neighboring South Darfur.

In the more remote areas of the state, many of the recently displaced families like Ayelle’s feared returning to their homes because of the tensions that still exist along the border. Villagers, returnees, and displaced alike were all trying to shore up their huts to withstand the coming rains and planting a few crops. Until the harvest in a few months, many people will depend on whatever food aid can be provided.

* Patient names have been changed at their request.