MSF has set up an additional base in Pagil, in Jonglei State, Southern Sudan, to deal with an alarming increase in the number of patients infected with kala azar—or visceral leishmaniasis. 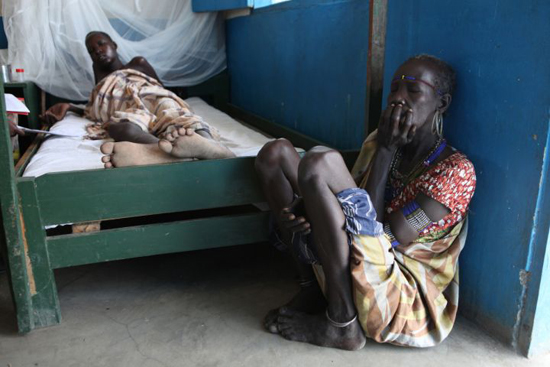 Doctors Without Borders/Médecins Sans Frontières (MSF) has set up an additional base in Pagil, in Jonglei State, Southern Sudan, to deal with an alarming increase in the number of patients infected with kala azar—or visceral leishmaniasis.

The new clinic comes in addition to MSF project sites in Leer, Lankien, and Nasir, as well as health centers run by other organizations in Ayod and Old Fangak, all of which report an unusually large number of kala azar patients seeking medical care, and many of which are seeing dozens of new admissions every week. Some patients have traveled for days to get treatment.

"Based on our experience last year, we expected an increase of patients from early September," said Chris Lockyear, MSF’s head of mission in South Sudan. "But the number of cases turning up at the various health centers in the region indicate that it will be even worse than the previous year."

If left untreated, the disease, which is transmitted through the bite of the sand fly, is fatal. Treatment includes not only providing kala azar drugs, but also intensive treatment of associated infections, such as pneumonia, diarrhea, and anemia. Treatment providers must also focus on malnutrition, which leaves patients more susceptible to the disease.

"The fact that we see these high numbers so early, in the traditional low season of the disease, indicate that we are on the brink of a massive outbreak later in the year," said Koert Ritmeijer, MSF health advisor and kala azar specialist.

The explanation for this early outbreak of the tropical disease is complex. "The last big outbreak of the disease was eight years ago," said Ritmeijer. "And as a result there is a whole new generation that has not built up immunity against the disease."

According to Ritmeijer, other influencing factors include climatic conditions which favor the sand fly, allowing it to thrive and transmit the disease. High levels of malnutrition this year in various regions of Southern Sudan, due to insecurity and failed harvests, compound the problem.

To relieve the pressure on existing health centers, MSF decided to set up this extra base in Pagil, a remote village with only one solid building that serves as a clinic. The MSF team members are living in tents and are treating most of the patients under canvas as well. Within the first two days, the team confirmed 16 cases of kala azar; this number is expected to rise once word spreads in communities that treatment is available in Pagil. The team, which consists, on average, of six international and national staff members, is facing some difficult logistical challenges.

"We aim to resupply the team every seven to 10 days," said Lockyear, "but that’s entirely dependent on the weather and the condition of the small airstrip, which is just black cotton soil that turns into sticky mud as soon as it rains. So we have to carefully select the drugs and medical supplies and not overload the small plane."

The team will assess the need to open other sites in the vicinity of Pagil depending on the trends of patients reporting to the various MSF clinics. As a result, the Pagil base will remain open well into 2011.