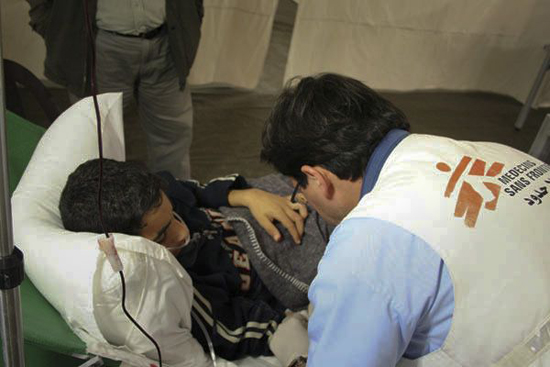 Gaza © François Dumont/MSF
Bilal, after having his foot operated at the MSF tent hospital in Gaza city.

Bilal, 14, is being helped by his father to drink a can of cola. He is feeling better, about an hour after he was operated on by a surgical team in an MSF field hospital in Gaza City.

It all started January 6. Bilal was at home, north of Gaza City, when an Israeli bombardment hit the house. There was a big explosion and Bilal was severely injured. He had a big wound to his right foot and burns across his body.

Bilal was brought to Gaza City's Al Shifa hospital, where he received an urgent operation. At the height of Israeli military operations, hospital staff were overwhelmed with wounded patients. In order to free space for other emergency cases, Bilal was sent to another hospital and then discharged.

As the days passed Bilal’s foot continued to bleed and it became infected. He was referred to MSF's field hospital and underwent a "wound debridement" operation - the removal of dead or infected tissue from a wound. Although he required a blood transfusion after the operation, doctors say he’ll recover quickly.

Almost one month on, Bilal is still feeling shocked, his father says. "It’s like he’s depressed, he has less motivation for life. His two brothers and sister were also injured in the explosion. They’re all scared by any noise."