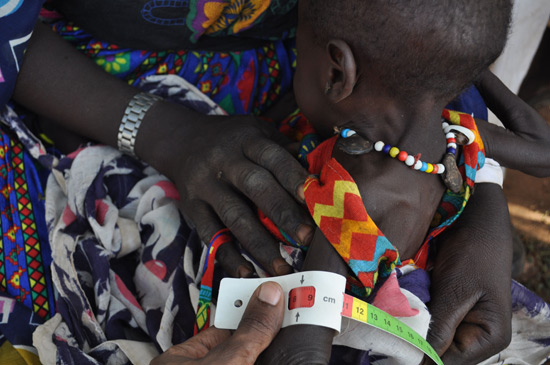 A child's arm is measured by an MSF staff member testing for malnutrition in al-Gedaref.

The food crisis in the Sahel region of Africa has caused widespread malnutrition, particularly among children. In two areas of Al-Gedaref state, in eastern Sudan, Doctors Without Borders/Médecins Sans Frontières (MSF) is running nutrition programs in collaboration with the Sudanese Ministry of Health. Dr Esther Sterk, emergency medical coordinator, describes what MSF teams have been doing over the past seven weeks.

What have you seen in the area in which you have been working?

The people in Gala Al-Nahal and Al-Quereisha are mostly farmers, and their main source of income is from selling agricultural goods and cattle. Last year, the rains were scarce and the harvest was scant and people had less to sell in the markets. Last year’s drought also left their animals malnourished and sick, and as a result many people lost cows, goats and sheep. People dug deep into their savings to survive the dry season. Although this year the rains seem to be generous, people have eaten all of last year’s food, and as a result the villagers do not have much left to survive the hunger season. The villages are far away from each other and, as it is the rainy season now, the roads have become inaccessible for cars. In these areas, people are totally dependent on MSF to treat acute malnutrition because they cannot travel independently, there are no means of transport, and the distances are long.

How does MSF assist the Sudanese population?

Médecins Sans Frontières has opened four feeding centers and we have four mobile teams going to remote areas to provide nutritional support. So far, MSF teams have treated 3,000 globally acutely malnourished children. We’ve also distributed more than 290,000 packets of ready-to-use therapeutic food, and everyone we’ve seen has had a medical consultation and follow-up. The team has been working closely with the Ministry of Health, as well as with the local community.

You have been working with MSF for six years. How do you feel about the latest emergency intervention?

Knowing how great people’s needs are, it has been really hard not being able to reach some areas of the state because of the bad road conditions and long distances. But we can’t be everywhere. I was very impressed by the work of the staff and the volunteers to move around with tractors in very bad weather conditions. Sometimes, mothers have walked for more than 10 hours to our treatment centers, [arriving] with children who are barely alive.

MSF has managed to find a way, in this remote and highly challenging environment, to cover the hunger gap in these areas for a lot of vulnerable children. And I hope we will be able to admit many more children to the program in the coming months.