On July 14, a seven-year-old boy was on his way back from school when he saw a shiny metal object sticking up out of the soil. As he attempted to pull the object from the soil, it exploded. 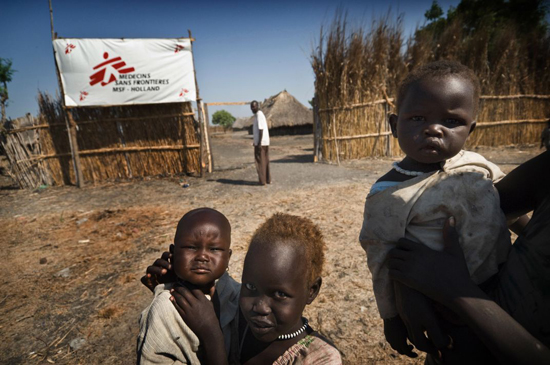 Four years after a comprehensive peace agreement ended the most overt warfare between the Northern and Southern Sudan, there are still numerous unexploded ordnances (UXO) found in many parts of the country.

The war has ended, but fighting continues to erupt, and although these days all eyes are on Abyei, an area currently in dispute between the North and the South, people in other parts of southern Sudan are also affected by the conflict and its repercussions. UXOs include ammunition, bombs, mines, grenades, rockets, and other explosives which were fired but failed to detonate and were not recovered. They are often hidden underneath the soil, leaving people in the area vulnerable, especially children.

Every year during the rainy season the rains expose devices washed up to the soil’s surface. This happens frequently in many areas Doctors Without Borders/Médecins Sans Frontières (MSF) runs projects in Southern Sudan.

“Nobody knows where these ordnances will appear and we expect to see more over the rainy season,” says Dave Croft, project coordinator at an MSF hospital in Nasir town in Upper Nile State. “Yesterday at the air strip I saw a rifle washed to the surface by the rain, lying there, accessible for every passer-by. Kids play everywhere here; they are curious and pick things up. There is an urgent need for an awareness campaign, especially for the children in Nasir.”

This danger was exemplified on July 14, when an UXO seriously injured a seven-year-old boy in Nasir. On his way back from school he saw a shiny metal object sticking up out of the soil. As he attempted to pull the object from the soil, it exploded. His family immediately brought him to the nearby MSF hospital where a team provides surgical care, along with other activities.

“His two hands were completely destroyed. I had to amputate his arms at the elbows,” says MSF surgeon Jose Sanchez Giron. “He had injuries on his face, his eyes, neck, chest, and abdomen, and also on one of his legs. Through the detonation he also lost his eyesight.”

Dr. Giron operated on the little boy; the child is now in stable condition and is being cared for.

“It is heartbreaking,” says Dr. Giron. “His parents are so happy he survived, but at the same time so worried about his future. He is a strong boy, but what future does he have in a country where surviving under normal circumstances is already very difficult?”

As a medical organization, MSF can only offer care for the victims. But more assistance to clear these devices is crucial. In addition, more education about the daily threat needs to be offered to people in the affected areas, particularly to children. MSF calls on donors to step up their support for intensified demining efforts and for more risk education for children.

MSF teams have been working in Sudan since 1978, providing emergency medical humanitarian assistance. In addition to frequent outbreaks of violence and attacks in the region, malnutrition is prevalent, maternal mortality rates remain among the highest in the world, tuberculosis and Kala azar infections are ongoing problems, and large-scale outbreaks of meningitis, measles, cholera, and malaria are common.