Sudan: Searching For Gold Under Bricks in Northern Darfur

Staff members are mostly from Darfur, and have felt the impact of the conflict in their daily lives. Both they and the patients they tend to have experienced immense loss, yet they carry on with dignity and give generously to one another. 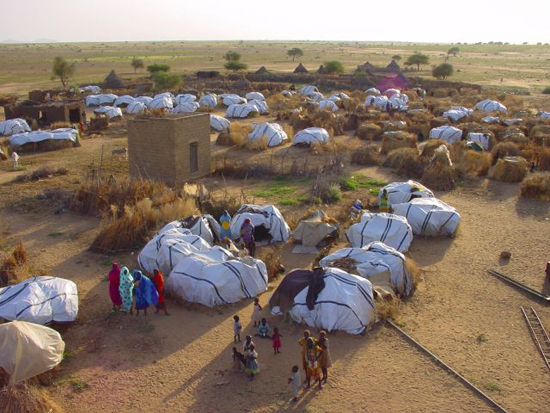 The Shangil Tobaya IDP camp in northern Darfur, home to thousands driven from their homes by the conflict.

"Shangili Tobaya Talgi Dahabaya" is a rhyme from the opening song of an old Sudanese television series that takes place in the town of Shangil Tobaya. In Sudanese colloquial Arabic, the words “Shangil Tobaya” mean “flip a brick,” and the popular rhyme translates as “flip a brick, you will find gold.” I heard that rhyme repeatedly when telling family, friends or colleagues that during my four-day visit to Northern Darfur, I would visit the Doctors Without Borders/Médecins Sans Frontières (MSF) hospital in Shangil Tobaya.

I arrived by helicopter one cloudy morning this past October. MSF’s rickety Land Rover drove through sandy fields flecked with an ccasional green bushes. From the window I could see countless gutiyat, conical huts built from straw and thin branches. Some were fenced with mud walls, while others used brick as well—perhaps because the owners assumed that they would not be returning to their villages anytime soon.

A clutch of gutiyat were located right across from the MSF hospital, while the others were adjacent to it. Together, these settlements are known as the Shangil Tobaya and Shadat camps, where about 28,000 internally displaced persons (IDPs) reside. Many fled from their homes due to the outbreak of conflict in their villages and have been living in gutiyat since 2004. Soon after they arrived, MSF initiated its medical activities in Shangil Tobaya. 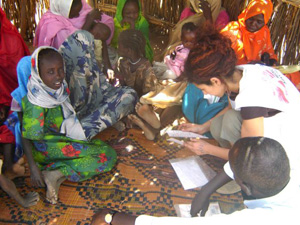 Women and children make up the bulk of the people who receive medical care at MSF's Shangil Tobaya program.

The hospital is a simple structure. Sturdy plastic tents along with local materials, such as straw mats, were used for the main building. The hospital’s waiting room is a tent-shaded area with a straw mat on the ground and two backless benches. Despite the modest appearance, the hospital is efficient and provides quality healthcare.

The tented rooms were full of activity. Doctors, nurses, mid-wives, and medical assistants tended to patients. In one room, a doctor weighed a baby, looking for signs of malnutrition. In the inpatient unit, three women in their early thirties tightly held their malnourished babies. I wished their babies a fast recovery. The mothers smiled sadly.

The majority of the patients were women and children, the groups most affected by the conflict. Some women have suffered depression, trauma, and sexual violence. These women come to the hospital’s psychological services for counseling and support. A small number of pregnant women and children under the age of five suffer from malnutrition. Due to poverty and drought, pregnant women have trouble maintaining a proper diet, much less increasing their nutritional intake. Likewise, children struggle to build up their immune systems. The IDP camps are crowded as well, with people living in close proximity, making it easier for diseases to spread.

MSF’s outreach team, which consists of 26 community health workers (CHWs) from Shangil Tobaya, conducts daily visits to the IDP camps and distant villages. The CHWs provide nutritional screening, follow-up on cases of malnutrition, conduct vaccination campaigns, refer patients to the MSF hospital, and train people in basic healthcare and hygiene. The CHWs who work in the nearby camps travel by foot, while those that visit faraway villages ride donkeys, the traditional form of travel in Darfur (cars would make them attractive targets for bandits).

The Sudanese staff are the core of the hospital. An international nurse and doctor fly in twice a week from El-Fashir, but the volatile security conditions and risk of kidnapping prevent MSF’s international staff from staying permanently in Shangil Tobaya. Without the dedication and willingness of the national staff, MSF would have not been able to do its work in Shangil Tobaya. Staff members are mostly from Darfur, and have felt the impact of the conflict in their daily lives. Both they and the patients they tend to have experienced immense loss, yet they carry on with dignity and give generously to one another.

Despite everything that the people in Shangil Tobaya have been through, community and kinship remain an integral part of society. People are struggling to survive, yet the locals, along with the displaced, pool their meager resources to help their neighbors, relatives, or friends. Bleak living conditions, emotional suffering and traumatic memories have not broken the people here. They continue to celebrate weddings, births, and many other occasions; henna, which is used for beautification during times of celebration, adorned the hands and feet of many women. They have lost their homes, villages, and loved ones, but they still want to celebrate life. Even now, when I think about the people I met in Shangil Tobaya, I am inspired by their resilience and strength in the face of despair and uncertainty.

Gold—dahabaya—may not be found when flipping a brick in Shangil Tobaya, but it manifests in many ways. Gold is the simple, yet efficient and resourceful MSF hospital. It is the dedicated hospital staffers who serve thousands of people in the region. Gold is the spirit of a community that exudes compassion and humanity even during the most trying times.