Programs in Other Parts of the Country Remain Open

After three separate security incidents forced the suspension of MSF's activites in Gumuruk, in Jonglei State, MSF calls on all parties to respect the neutraility of its medical activities and facilities. 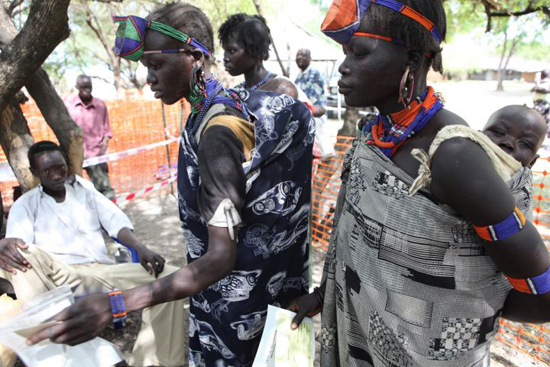 Women waiting to receive vaccinations at an MSF facility in Pibor in 2009.

MSF is calling on all armed groups, community members, and political parties in Southern Sudan to respect the neutrality of MSF medical staff, activities and facilities so that lifesaving aid can be delivered to people urgently in need.

“Attacks on our staff and clinics prevent us from providing essential medical aid,” said Rob Mulder, MSF head of mission in Southern Sudan. “These incidents are totally unacceptable as they stop us from accessing patients and put our staff at risk.”

MSF runs a primary health care center in the town of Pibor in Jonglei State, and from there runs two smaller outreach clinics in more remote areas, Lekwongole and Gumuruk, which are only accessible by plane or boat during the current rainy season.

On July 1, an armed group entered the Gumuruk clinic and stole boxes of the therapeutic ready-to-use food (RUTF) with which MSF treats severely malnourished children. Three days later, more RUTF was stolen along with medical equipment. Then, on July 27, four MSF staff members travelling by boat from Pibor to Gumuruk were violently robbed by armed men.

“Though we are fully committed to providing emergency medical aid to Gumuruk community, we have been left with no other choice than to suspend all medical activities in our outreach clinic,” added Mulder.

The Gumuruk outreach clinic provides basic medical care, including general consultations, treatment for malnutrition, ante-natal care, and vaccinations for a population of more than 30,000 people. Complex medical cases requiring hospitalization are referred to the larger MSF clinic in Pibor; serious cases in need of surgery are evacuated from there by MSF plane to hospitals in Boma, or in the capital, Juba.

“More than 160 malnourished children were receiving treatment in our Gumuruk clinic,” said Gbane Mahama, MSF medical coordinator for Southern Sudan. These children had received rations to last them for a week, but with the staff evacuated, there is no one to continue their treatment. “In addition,” Mahama adds, “there were up to 20 new cases of severely malnourished children each week. Unless access to this community improves, it is impossible to evacuate those who need hospitalization or surgery, including women with obstructed labor or children with cerebral malaria or severe anemia who need blood transfusions.”

Apart from a small of Health facility in Pibor town, MSF is the only primary health care provider in this part of Jonglei State, which is home to around 150,000 people, where villages are separated by large distances, and where roads are often impassable.

MSF is an independent and neutral emergency medical organization that serves all people based on impartial assessments of need, regardless of race, political, tribal or religious affiliation.