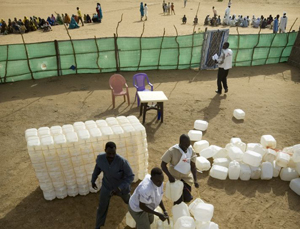 Doctors Without Borders/Médecins Sans Frontières (MSF) is extremely concerned about recent comments made by Sudanese government representatives that the organization's activities in South Darfur may be suspended after October 31.

In February 2008, based on the health needs of displaced people and local residents, the Dutch branch of MSF signed an agreement with the state government of South Darfur for medical activities to be carried out through the year.

The agreement was sent to Khartoum for national endorsement. For months, MSF has been engaging with the Sudanese government in an attempt to obtain final signatures, but without success.

The government has since asked MSF to reduce its personnel, to stop certain medical activities, and to limit staff numbers. MSF is continuing to negotiate the signing of the agreement, which covers current MSF activities.

Since 2004, MSF has been providing humanitarian medical aid in Darfur with full transparency and with the consent of Sudanese government officials.

MSF has worked in Sudan for more than 25 years. Over the last four years, MSF clinics and hospitals have treated hundreds of thousands of people in Darfur. MSF's work here has helped to stabilize the health of the populations and reduce their suffering.

"For decades the Sudanese authorities have allowed MSF into the country to help people in need," said Vincent Hoedt, former MSF head of mission in Darfur and now with the organization's operations department in Amsterdam. "We don't understand why they are now trying to prevent us from providing medical aid to the population. It's incredibly frustrating, when there are clearly still serious needs in Darfur."