MSF reports more than one in three wounded and dead are women and children.

Civilians are under relentless attack in Syria’s five-year-old conflict, with 1.9 million people under siege, borders closed to refugees, and rampant bombings of medical facilities and heavily populated areas, the international medical humanitarian organization Doctors Without Borders/Médecins Sans Frontières (MSF) warned today, calling on permanent UN Security Council member states involved in the Syrian conflict—specifically France, Russia, the UK, and the US—to ensure that they and their allies abide by the resolutions they have passed to halt the carnage.

In a report issued today, MSF details the toll of the conflict on civilians, based on data from 70 hospitals and clinics that MSF supports in northwestern, western, and central Syria. In all, 154,647 war-wounded people and 7,009 war-dead were documented in the facilities in 2015, with women and children representing 30 to 40 percent of the victims.

The medical data MSF has documented provide evidence that civilians and civilian areas continued to be devastated—whether targeted or indiscriminately struck—in the brutal conflict. 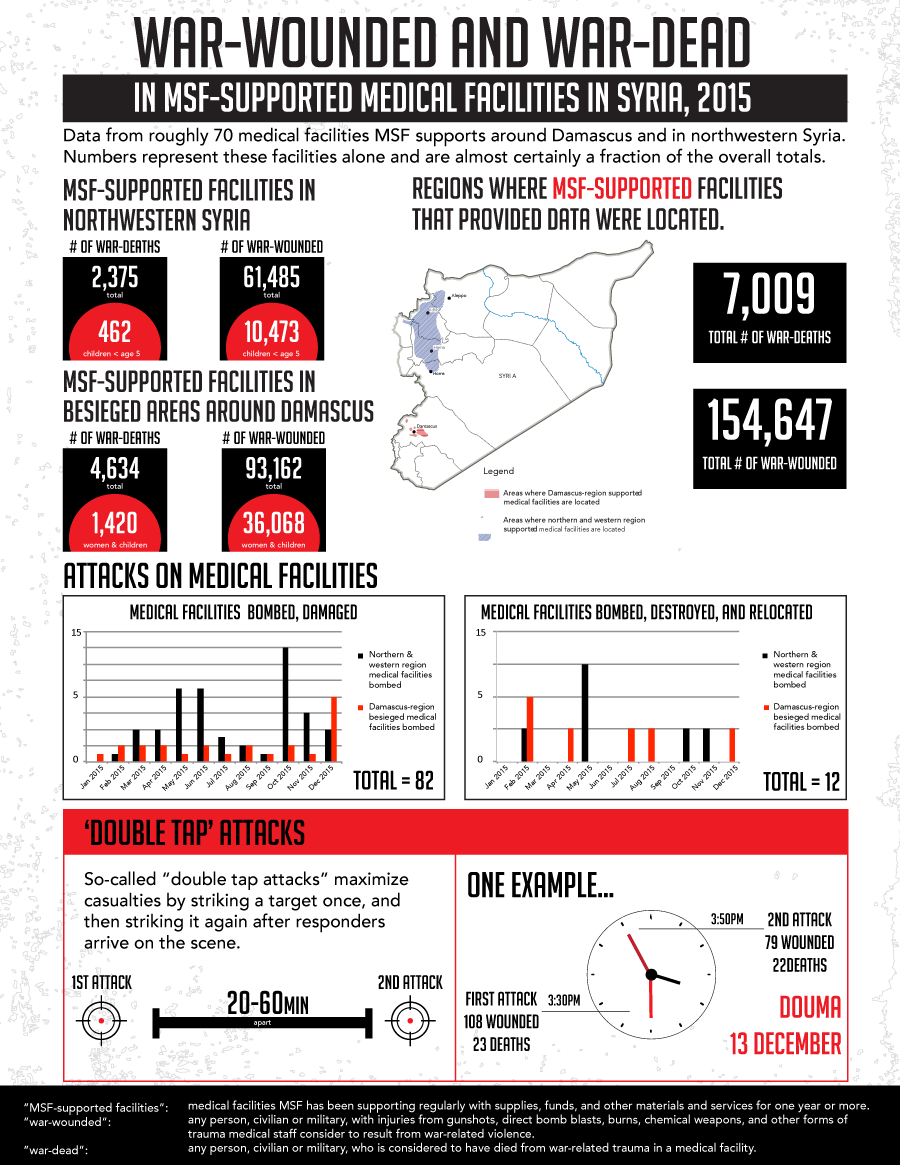 "While the data we collected are staggering, they are just a snapshot of a larger toll," said Dr. Joanne Liu, international president of MSF. "Those injured or dying beyond health facilities supported by MSF remain uncounted. The true situation is very likely far, far worse."

The data released by MSF reveal that sixty-three MSF-supported hospitals and clinics were bombed or shelled on 94 separate occasions in 2015, destroying 12 facilities and killing 23 staff members. So far this year there have been seven further strikes on six MSF-supported medical facilities.

"Permanent members of the UN Security Council, four of whom are actively involved in the war in Syria, must answer for their failure to uphold their most basic responsibilities toward civilians," said Dr. Joanne Liu. "The council’s own resolutions prohibit attacks on civilians, attacks on medical facilities, sieges, and starvation tactics, and yet this is exactly how the war is being waged with their participation."

In the Damascus region, more than 70 communities and neighborhoods are under siege with a combined estimated population of 1,450,000. Medical supplies and medical evacuations are almost never authorized in these areas, while 93,162 wounded patients were treated in MSF-supported facilities in these areas alone in 2015.

Starvation appeared in Madaya as a consequence of siege tactics, with 49 deaths in December 2015 and January 2016. Nearly half a million people are estimated to be under siege in other areas of Syria, including Homs and Deir ez-Zor governorates. MSF has repeatedly called for medical evacuations out of besieged areas for critically sick patients, and for sustained regular humanitarian relief to be allowed into these areas.

Already in 2016, at least 17 health facilities have been bombed in Syria, including six supported by MSF. On February 15, an MSF-supported hospital in Ma’arat Al Numan, Idlib Province, was destroyed by multiple airstrikes, killing 25 people, including nine staff members. It was a fully functioning, 30-bed hospital, treating several thousand people per month.

"The bombing of the Ma’arat Al Numan hospital is a blatant violation of the laws of war, and it is only the tip of the iceberg in attacks on medical facilities in Syria," Dr. Liu said. "We say loud and clear: the doctor of your enemy is not your enemy."

MSF calls for states implicated in the war in Syria to activate an independent investigation into the facts surrounding the bombing of this supported hospital, either through the International Humanitarian Fact-Finding Commission (IHFFC) or any other available independent mechanism.

This the latest incident in a horrific string of attacks that targeted hospitals in Syria https://t.co/sb610pJTgs pic.twitter.com/mXSLULNOeN

In northern Syria’s Azaz District, an estimated 45,000 people have fled toward the Turkish border in February alone, where about 55,000 people were already displaced. The front lines of the conflict are rapidly approaching, now just five miles or eight kilometers from camps for the displaced. Armed groups in the area must avoid military operations close to trapped, displaced people, and, as anywhere else in Syria, military operations in this area have to ensure protection of civilians and avoid targeting health structures, MSF said.

"People have nowhere to escape," Dr. Liu said. "We are grateful that Syria’s neighbors, including Turkey, have taken in so many Syrian refugees, and we hope they will continue this humanitarian commitment as the situation worsens in Azaz District. At the same time, all countries must live up to their commitments, and the treaties protecting refugees they have signed. Notably, countries involved in coalitions militarily active in Syria must make increased efforts to ensure safe passage and safe dignified reception of refugees fleeing for their lives. They must support Syria’s neighbors in hosting the greatest number of Syrians, but also must not condemn these people to death by sealing their own borders to refugees."

The areas documented in the new MSF report cover the northwestern, western, and central parts of Syria, with a focus on besieged areas where medical support is most lacking. It should also be noted that, for reasons of independence, MSF uses no government funding for its work in Syria.

MSF‐supported facilities refer to medical facilities that MSF has been supporting regularly for one year or more. The nature of MSF’s support includes providing medical supplies, paying a basic salary to hospital staff to enable them to focus on their medical work, providing fuel to enable the hospital generators to function, contributing to the cost of reconstruction when a facility is damaged or destroyed, and providing technical medical advice. Around 70 Syrian facilities receive this comprehensive package of support from MSF, and around 80 other medical facilities are supported in a less-regular fashion, with medical supply donations and technical advice when in critical need, such as after a mass casualty influx.

Although support activities have been developed by MSF since 2011, 2015 was the first year where the medical data was received in a consistent and sufficiently regular manner to be able to provide an annual view of the medical situation in the supported areas.

The MSF-supported hospital in Ma’arat Al Numan was attacked and destroyed on Monday 15th Feb. At least seven people were killed, and at least eight are missing, presumed dead. The 30-bed hospital had 54 staff, two operating theatres, an outpatient department and an emergency room. The outpatient department treated around 1500 people a month, the ER carried out an average of 1,100 consultations a month, and around 140 operations a month, mainly orthopaedic and general surgery, were carried out in the operating theatres. MSF has been supporting this hospital since September 2015 and covered all the needs of the facility including provision of medical supplies and running costs.
MSF