Ruth Priestley is an MSF operating theater nurse who recently returned from Syria. Here she discusses her experience in MSF's surgical trauma hospital. 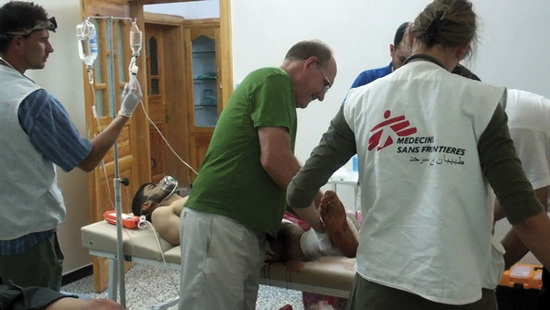 MSF staff examine a patient at the surgical trauma hospital.

Ruth Priestley is an Australian operating theater nurse who recently spent nine weeks working in Syria with Doctors Without Borders/Médecins Sans Frontières (MSF). In this interview she discusses some of the patients who made a big impact on her, and how the situation changed while she was there.

What sorts of injuries did you see in Syria?

Our patients were predominantly war-wounded, with gunshot wounds or bomb blast injuries. We did a lot of orthopedic interventions and laparotomies [abdominal explorations], and found various major organ damage, requiring significant surgery. Patients sometimes had 13, or even more, holes in the bowel, others would have bladder injuries as well, or a spleen torn in two.

One man we operated on had at least 20 wounds in his body, from bomb blasts, shrapnel, and gunshots. They started at his feet, went all the way up his legs and torso, and finished at his right nostril and left forehead. Yet somehow he survived, with no major internal injuries. He had significant damage to his hands, but I was amazed at how he lucky he was and relieved that he did not require an arm amputation.

Did any other patients make a particular impact on you?

One young man accounted for nine out of the first 29 operations we did. His injury resulted in a hindquarter amputation [an operation in which the entire leg and part or all of the pelvis are removed]. He came back regularly for surgery and we were eventually able to close the wound and he was discharged. After that, he would come back on crutches, with his brother, both with huge smiles on their faces, happy to see all of us who had been involved in his care. It was so good to see his recovery and that he was doing well. Quite a few weeks later we received the sad news that this young man had been killed in a bomb blast in Aleppo. It was devastating for all of us.

One day we received about seven children all at once, following a bombing in the bazaar in a nearby town. One was a nine-year-old girl who had an eviscerated bowel and injuries to both legs. We did the bowel surgery and had to amputate one of her legs. We had to time her return to theater for dressings and wound closure according to how her little body could cope with all the anesthetics. In that bombing incident two of her siblings and four of her cousins were killed.

Was it difficult to cope with emotionally?

When you’re faced with these horrific injuries, it can be difficult, however, like medical people in all arenas, you just keep going with the knowledge that it’s about caring for the patients and not about how you react to it. I am always aware of the difference of my position compared to our patients . . . that I can leave.

But it makes you angry and very sad to see the impact on people’s lives. When the bazaar was bombed, it was civilians who were the victims . . . so that makes you angry. All day we would see the reality of life in a war and the damage it causes. All these people injured and maimed for life.

How did the situation change while you were there?

When I first arrived we were very busy. We just kept working, day and night, and barely knew if it was 3:00 am or 3:00 pm. I had to write the date and time on the noticeboard, just to ground myself. At the end of the first three and a half weeks it was as if I had been spun around in a washing machine, and finally hurtled out the other end, with just enough time to draw breath.

Another change was that the population increased in the village where we were based, as people moved away from the conflict areas. Most—if not all—of the homes had several families living in them, and many families camped in one of the schools. Others stayed out under the olive trees at the border, waiting to be allowed to leave as refugees. Because of this change we began receiving patients with general primary health care needs, including chronic health conditions and diarrhea. We were constantly monitoring the demands and adjusting our care accordingly.

Throughout my time in Syria we continued to receive patients with severe, debilitating war injuries requiring lifesaving emergency surgery. Also, once the local field hospitals were established, some of our patients had already had good surgery so we just provided dressings and general care.

Where did your patients come from?

Our patients sometimes came from long distances. Patients would come to us from Aleppo or other towns, many travelling for five hours. That length of time between injury and treatment adversely affected their outcome.

Did you have any security incidents?

There were moments when we were on standby, ready to evacuate ourselves and our more seriously injured patients. The surgeon had to weigh how quickly we could do certain procedures, to decide if we could finish before we had to evacuate. Those were difficult decisions.

MSF established its surgical trauma hospital in Syria in mid-June in collaboration with the Union of Syrian Medical Relief Organizations. By the end of September, more than 1,100 patients had been treated, and more than 260 surgical interventions had been conducted.