While DR-TB is on the rise, less than seven percent of 440,000 new cases each year are treated. Drug-resistant TB kills 150,000 people annually. 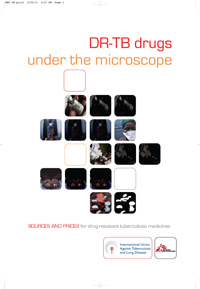 “Now that we have a new test that can detect DR-TB in less than two hours instead of three months, we’re going to see many more people who will need reliable drug supplies to be cured,” said Dr. Jennifer Hughes of MSF, in Khayelitsha, South Africa. “We need to see some immediate action to resolve these problems and improve access to DR-TB drugs so that more people are started on treatment and transmission of this disease is reduced,” she said.

MSF is rolling out the new test in 15 countries this year.

While the treatment of DR-TB relies on old antibiotics—many of which have severe side effects, ranging from constant nausea to deafness—they are the only drugs that exist today that can tackle DR-TB. Patients must take up to 17 pills every day for up to two years. MSF’s report shows that these drugs are riddled with persistent supply and price problems, which must be urgently addressed.

“Patients have been stuck in a vicious circle – not enough people are diagnosed, and drug supply problems along with high prices stand in the way of putting more people on treatment,” said Dr. Tido von Schoen-Angerer, executive director of MSF’s Campaign for Access to Essential Medicines. “The low demand for DR-TB drugs has made the market unattractive for producers, which is reinforcing supply and price problems.”

MSF’s report examined medicines used to treat DR-TB according to the number of suppliers, quality assurance and price, based on information obtained from the Global Drug Facility and from drug manufacturers. It found that four of the recommended medicines are available from only one quality-assured source. Relying on a sole supplier whose production could be disrupted or stopped at any time always carries a risk of dangerous treatment interruption for patients. For example, supplies of the injectable drug kanamycin were disrupted during 2010, leading to a temporary global shortage. 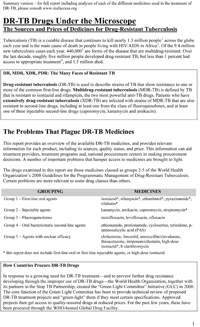 Additionally, MSF’s report found that several DR-TB medicines are very expensive, with prices for two drugs having increased by more than 600 percent and one drug by more than 800 percent over the last decade. A 24-month DR-TB treatment regimen can cost as much as US$9,000 for a single patient – 470 times more than the $19 per patient it costs to cure standard, drug-sensitive TB.

Donors, including the Global Fund to Fight AIDS, TB, and Malaria and governments, can spur increased production of some of the needed drugs by guaranteeing multi-year purchases from manufactures. Better forecasting of the mid- to long-term needs for DR-TB drugs is also necessary to help attract more producers to the market, to avoid shortages, and reduce prices through increased competition.

“With faster diagnosis and better treatment models of DR-TB, we need to fix the supply and price issues with DR-TB drugs,” said Dr. Hughes. “Ultimately, we also need to see new drugs developed.”

In 2010, MSF treated close to 30,000 people with TB in 29 countries, and 1,000 patients with DR-TB. Projects where MSF treats DR-TB range from prisons in Kyrgyzstan to urban contexts in India and HIV-endemic settings such as Swaziland and South Africa. MSF has developed treatment strategies that are adapted to individual contexts, often providing treatment in the community through ambulatory care models so as to reduce the burden on patients and boost adherence to treatment.

A report on the community care model of DR-TB treatment in Khayelitsha, "Scaling-up diagnosis and treatment of drug-resistant tuberculosis in Khayelitsha: An integrated, community-based approach" was also released today by MSF in South Africa. It details how the decentralised model can increase detection rates and improve treatment results. To access the report, visit www.msf.org.za