Tending to "Invisible Wounds" Among Sudanese Refugees in South Sudan 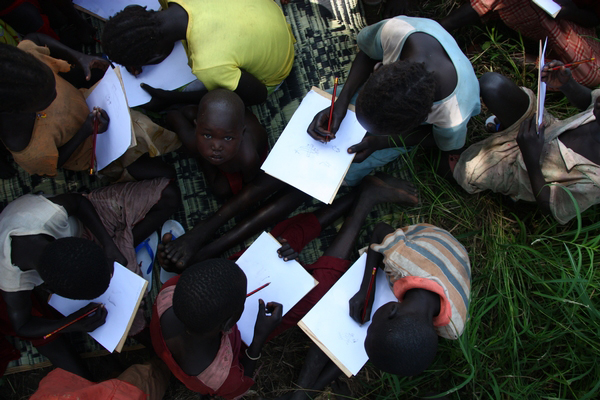 It almost goes without saying that being a refugee is a tremendously stressful situation. This stress brings with it additional challenges for individuals and families already stretched to their limits. Among the Sudanese refugees who fled conflict and bombardments in their villages and are now seeking sanctuary in South Sudan, Doctors Without Borders/Médecins Sans Frontières (MSF) teams are seeing a great deal of depression, anxiety, fear, and physical ailments with no clear origins. In Upper Nile State’s Maban County, where upwards of 100,000 refugees from Sudan’s Blue Nile State are living in a network of camps, MSF therefore augments its medical activities with psychosocial care.

The stress manifests in many different ways, and part of MSF’s aim is to help people find ways to express it. One day not long ago, a girl around 14 years old wearing a threadbare nightgown sat quietly among a group of smiling and shouting children, staring down at a piece of paper. She had been asked to draw the thing that she fears most, and despite the noise around her, she was focused entirely on the exercise.

MSF psychologist Julia Stempel leaned over to see what the girl was drawing. A picture of a large airplane covered most of the paper.

“The children are asked to draw what frightens them the most, and almost everyone draws an airplane,” Stempel said. “They say it’s the airplanes that forced them to flee.”

Stempel works with five other psychosocial counselors and ten community workers to help children and others find ways to express the feelings that come with their circumstance—and then to have them connect to something less stressful. After asking the children to illustrate their fears, for instance, they ask the children to draw a second picture, this one depicting a safe place, a place that can elicit the feeling that “the danger is over now.” After having them draw their greatest fear, the team wants to suggest to the children that for the moment, they have less to fear—that they are, in other words, far from those planes now.

Singing, drawing, and role play are a few of the tools MSF’s mental health team in the Doro camp uses to reach out to the refugees, to help them make some sense of what’s happening to them, and to help them understand, Stempel said, that “our mind can get ill just as our body can get ill.”

The chronic stress many refugees live with can manifest itself in psychosomatic symptoms such as headaches or stomach aches. And these ailments can affect not only individuals, but whole families.

“A grandmother in one of the families was suffering from a very bad depression, and just spent her day lying passive in the hut, doing this for the last three months,” Stempel said. “The whole family lived around her in that hut, and her condition, the experiences of fleeing, plus the living conditions in the camp were so stressful for the family that one of her granddaughters stopped talking, lost appetite, and started showing depressive symptoms too. Having two members of the family suffering in that way put an extra level of stress on the family, who are already under a lot of pressure. That's where we try to reach out and help.”

MSF’s mental health counselors conduct group sessions for various community groups in the camps, as well as home visits and individual consultations, trying to reach as many people as possible and helping the people to heal themselves and each other.

“The greatest success so far is seeing how people grasp the idea of mental health and can support each other,” says Stempel. “The discussions in the groups, when people open up and say 'I feel that as well,' that's when I think, ‘Yes!’”