The Nigerian government has failed to release funds needed to remove lead from homes in a northern area of Nigeria, where hundreds of children have fallen ill or died from lead poisoning since 2010. 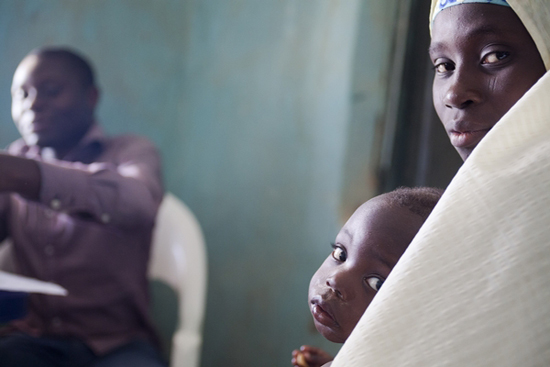 One-and-a-half-year-old Husseini and his twin brother are both on chelation therapy for lead poisoning.

ABUJA, NIGERIA, NOVEMBER 15, 2012—The Nigerian government has failed to promptly release funds needed to remove lead from homes in a northern area of Nigeria, worsening a health crisis in which hundreds of children have fallen ill or died from lead poisoning since 2010, the international medical humanitarian organization Doctors Without Borders/Médecins Sans Frontières (MSF) said today.

Funds to tackle an ongoing lead poisoning crisis in Zamfara District—with a specific focus on the remediation of Bagega village—were promised by the president in May 2012, but have still not been released by the secretary of the government of the federation. The remediation process removes lead from the environment. Without it, children are continually re-exposed to lead toxins, rendering medical treatment useless. MSF has been treating victims of lead poisoning in Zamfara district since it was discovered in 2010.

“Bagega is reaching a crisis point,” said Michael White, acting head of mission for Nigeria. “More than two and a half years after the lead poisoning disaster was first discovered, hundreds of children are still awaiting critical medical treatment. MSF is ready and willing to treat these children, but cannot do so until their homes have been environmentally remediated. It’s time to get the lead out of Bagega.”

A report released today by MSF, six months after the organization hosted an international lead poisoning conference in Nigeria, explains that very little action has been taken on any of the agreed action points from the conference. A successful resolution to the crisis must include a three-pronged approach of professional remediation of affected villages, medical treatment of the most vulnerable victims, and implementation of safer mining practices.

Remediation was due to begin at the end of October 2012, immediately following the rainy season. The window for remediation in Bagega is closing rapidly, and the process must be initiated by the end of the year, before the onset of the next rains. Failure to release the needed funds and immediately begin remediation could have disastrous consequences for the community, MSF said. MSF has been collaborating closely with TerraGraphics, an international remediation company that led the successful environmental clean-up of seven villages in Zamfara state in 2010.

“TerraGraphics, MSF, and local stakeholders are all prepared to immediately begin working upon the release of the funds. Both organizations have been collaborating with government agencies and ministries to ensure there is a system in place that is effective, accountable, and transparent, and that will guarantee the best outcomes for the communities of Bagega. This kind of collaboration ensures Nigerian participation and ownership of both the process and results while assuring accountability and compliance with internationally recognized standards and best practices.

“MSF and TerraGraphics have done everything in their power to address this crisis,” White said. “In the end, the ultimate responsibility rests with the government of Nigeria. Only immediate action by the government can change the situation for the better.”

MSF has been providing emergency medical services throughout Nigeria since 1971. The organization is not affiliated with any religion, government agency, or political party.

MSF, the Nigerian Centre for Disease Control, and Nigeria’s Federal Ministry of Health hosted the International Lead Poisoning Conference in May, 2012. Copies of the six month Progress Report, and the original action plan, are available here.