Uganda: Alarming Increase in Hepatitis E in the North 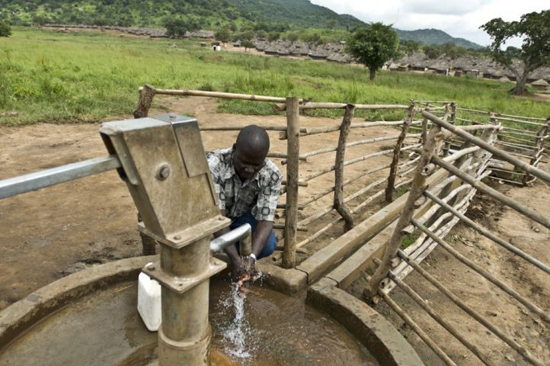 An MSF water-and-sanitation worker checks the water pump in an IDP camp.

Kitgum district, in Northern Uganda, is home to hundreds of thousands of internally displaced persons (IDPs). Since October 2007, the camps and recently resettled villages have been host to a spreading Hepatitis E outbreak. Many residents have been infected and the virus is continuing to spread south to Gulu and Pader districts. By the end of July, the number of seriously ill patients seeking hospitalization had grown to more than 5,700.

During one week in July, 410 new cases of Hepatitis E were diagnosed by Doctors Without Borders/Médecins Sans Frontières (MSF). While the disease makes some people itch and become jaundiced, others can die of severe hemorrhaging or complications while in a comatose state. Thousands of people have been infected, but MSF teams have seen only the worst cases.

The area that more than 200,000 displaced people now call home looks like an ocean of small mud huts. The people here have fled their lands after being terrorized by the Lord’s Resistance Army (LRA) or have been moved into camps by the government. Living in makeshift shelters with poor sanitation facilities and little freedom of movement, they are especially prone to disease outbreaks.

The first case was diagnosed in November 2007, after a patient from the Madi Opei IDP camp arrived bleeding and in a comatose state, at first feared to be symptoms of the Ebola hemorrhagic fever. The patient was quickly isolated and blood samples were sent to the Uganda Viral Research Institute supported by the Center for Disease Control in Atlanta, which identified Hepatitis E. In the following weeks, more cases were found. In the Madi Opei Health Center, where MSF is working in collaboration with the Ministry of Health, a ward has been completely dedicated to isolating and treating Hepatitis E cases. Patients have come in from the entire district and from southern Sudan.

No Cure, No Vaccine 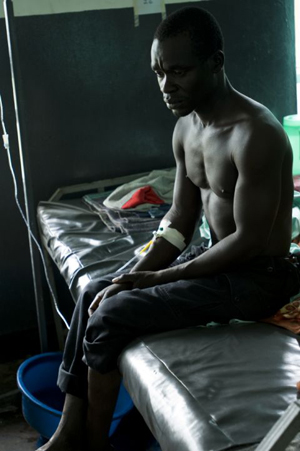 There is no cure or vaccine for Hepatitis E—it must simply run its course. The source of the primary contamination remains unclear as there are or have been infected people in most of the villages and camps in the area. By the end of July 2008, MSF had treated 1,394 patients for Hepatitis E and recorded 40 deaths in Madi Opei. For the Kitgum district, a total of 5,749 cases of Hepatitis E had been reported, with 96 deaths.

Hepatitis E is a non-chronic viral infection, affecting the liver. It is transmitted most often through contact with feces, usually by eating or drinking contaminated food or water, although transmission from person to person is also possible. Symptoms include loss of appetite, nausea, vomiting, discolored urine, jaundice, and abdominal pain. Pregnant women with Hepatitis have a greater risk of dying, and mortality for pregnant women can reach 20 percent during the third trimester. Pregnant women are also prone to premature deliveries, and infant mortality can reach up to 33 percent.

Guro Steine, an MSF doctor in Madi Opei, treated a female patient transferred to the MSF health center. “I could not find a pulse on the woman; she vomited and was in a coma. In the hospital, we inserted a peripheral intravenous line, gave her fluid, and all we could do was wait. The woman’s baby daughter received her feeding through a bottle as her mother could not breastfeed her anymore. This is a common and serious problem for lactating women who have Hepatitis E,” she said.

Health centers in Northern Uganda are often understaffed, and the medics who are there often know very little about managing Hepatitis E. As a result, medications are often used that cause complications for the patients. People infected with Hepatitis E should not take drugs that interact with the liver as the liver is affected by the virus. A seemingly harmless dose of paracetamol can put a patient into a coma. 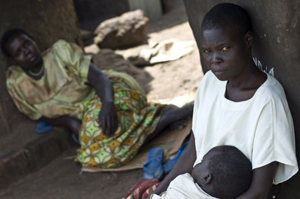 While chlorinating the water can reduce the virus, this basic precaution is not enough to control an outbreak. In Kitgum, poor hygiene practices at household level, such as a lack of hand-washing with soap after using the latrine or before meals, sharing of contaminated pots and buckets, a lack of high-heat cooking methods, and a lack of latrines all play a role in the continued transmission of Hepatitis E.

Villages that were abandoned during the war are now being repopulated by displaced people who were encouraged to go back home by the government. Their water access points are not necessarily safe and chlorine tablets are not provided for people living outside the camps. During resettlement, latrines do not rank high on the list of priorities. “When we got back, our first priority was to build new houses for our families. Then we had to make sure we could grow crops again, so we prepared the fields. We were lucky that we had one of our two boreholes still working—but no latrines. So we went to the bush and were using the water carefully,” said Olak Marco, a farmer who recently returned from Madi Opei camp to his village, where he contracted Hepatitis E.

People start by building shelters and tending to their crops in order to feed their families. They have no latrines and often do not have access to clean water as the borehole pumps are broken and people cannot afford the necessary maintenance. Thus they have to defecate in the bush behind their houses and their water sources become easily contaminated when the rain comes. Some villages are still without boreholes and take water directly from potentially contaminated streams. Kodjo Edoh, MSF Head of Mission in Uganda, explains: “In fact, many people in the camps have not yet moved back. More than 50 percent of the population still remains in congested camps, because at the return site there is a lack of basic services and people are still fearing renewed insecurity.”

Even if Hepatitis E is not fatal for the majority of the people infected, it does leave most weakened for months. As people are trying to move back to villages and plant their crops, they need their full strength to rebuild and protect their families.