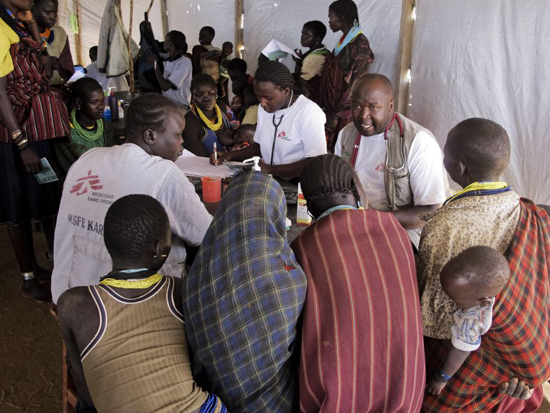 Watch/listen to the MSF podcast: Women Pay the Price for Neglect in Northeastern Uganda

The people of Kaabong District, located in the Karamoja region of northeastern Uganda, have the unenviable title of being among the poorest in the country. Large parts of the population suffer from violence and chronic neglect—70 percent cannot access health care.

Doctors Without Borders/Médecins Sans Frontières’ (MSF) purpose in Kaabong is to help strengthen government health services. Teams are supporting nine Ministry of Health centers and the district referral hospital. They also run mobile clinics to isolated areas, offering medical services to the many people who can’t reach a health facility on their own.  But convincing people to seek medical assistance in an institutional setting is one part of a large problem. According to the acting medical superintendent of Kaabong Hospital, Dr. Nalibe Sheriff, getting people to walk through his hospital doors is a struggle.

“The people in Kaabong District are basically nomadic pastoralists,” said Dr. Sheriff. “They are also one of the poorest peoples in Uganda. So you find the latrine coverage is two percent. Due to these conditions, diseases such as cholera and hepatitis E, they are really common here. Still, people prefer to treat themselves using traditional methods. Even the majority of pregnant women do not come to hospital to deliver.”

According to MSF’s 2010 data, only 29 percent of women in Kaabong deliver at the main referral hospital which is meant to service a population of 369,500. Talking to women about the benefits of institutional deliveries is therefore an essential part of MSF’s work here. Kyotuhaire Merecy Ishanga, MSF’s maternal health supervisor, and her team of outreach nurses go out into the community to encourage pregnant women to come in. But as midwife Lina Loyce, who attends to pregnant women at Kaabong Hospital says, many more maternal and neonatal deaths could be prevented if more women delivered in hospital.

“Mothers from here at times prefer delivering in the villages,” said Loyce. She points to one patient in the maternity ward. “Like that mother there, she was brought after having pushed at home for a very long time. When we took her to theatre the uterus had already torn apart. Add to that the mother started with labor pains at 11 in the night; they reached here at 6:30. Now, you can imagine after all that time the baby did not survive.”

The center of Kaabong town is bordered on one side by a dry river bed where kids dig holes hoping to find water. The inhospitable surroundings span as far as the eye can see. The distance between people’s homes and the nearest functioning health center can be non-traversable. It can also be dangerous.

In an area where resources are extremely scarce, fighting for what little wealth there is can be brutal. People in this region are cattle keepers—cattle are their wealth reserve and people do not eat them except in an emergency. Cattle raiding has gone on for decades in the area and was initially a relatively peaceful traditional act. However, since the introduction of firearms in the area in the late 1970s, it has been among the most insecure parts of the country.

“The raiders when they come from one community to another, they cross these villages,” said Prisca Obara, MSF’s mobile clinic supervisor. “So people fear that they might kill them.”

While fear of being caught up in a raid keeps people afraid to travel to the nearest health facility, wounds resulting from the violence adds to the plethora of medical needs. It also adds to the image of Kaabong as a backward place where no one wants to go, not even health staff. Kaboong has largely fallen off both the government’s and international community’s radar, said MSF's country director in Uganda, Will Robertson.

“Karamoja in many ways has the highest and worst indicators in the country for many areas: for infant mortality, for neonatal mortality, and for maternal mortality,” he said. “It needs substantial investment by partners to develop a health system. But in the end it’s an area that has got substantial poverty and substantial levels of violence that impact the lives, so these should be addressed in a way that improves the lives of the community. There is only so much an NGO can do, so we are making a call that there should be greater investment in health services in Kaabong.”

When dusk falls on Kaabong, the vendors put away their unsold wares, dogs meander on the dusty roadside looking for a place to rest, and the sounds of women singing takes hold of the night. Like the violence, poverty, drought, and other constant hardships, there is a stable pattern to life here—a stability that masks a chronic humanitarian crisis.

In 2010, MSF teams performed more than 35,000 medical consultations in Kaabong District. The great majority of consultations were during outreach activities, especially children under five years old suffering from diseases and health problems caused by the indirect medical effects of insecurity, systemic neglect, and marginalization.

MSF has provided medical and humanitarian assistance in Uganda since 1980.