Violence In DRC Wracks Masisi Too

Violence is plaguing not just the Goma region of DRC's North Kivu province, but Masisi as well, limiting people's access to medical care. 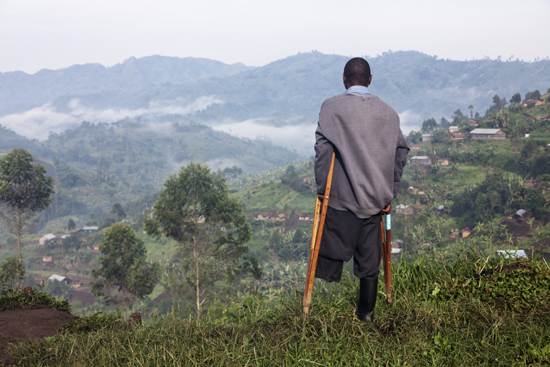 From just outside the main entrance of Masisi hospital the view stretches over the mountainous and sometimes conflict-wracked landscape of North Kivu.

While people living in Goma and sheltering in nearby camps continue to live in fear of new clashes between an armed group called the M23 and loyalist forces, Doctors Without Borders/Médecins Sans Frontières (MSF) is witnessing increased violence in Masisi, some 80 kilometers (48 miles) to the northwest. In this isolated area of North Kivu, the medical emergency organization is providing support to the region’s primary hospital.

The violence, the fiercest since 2007, has forced tens of thousands of people to flee and has sharply restricted access to medical care around Masisi. MSF program manager Amaury Grégoire provides an update:

What is the current situation in the Masisi region?

We are very concerned by the sharp upturn in violence. The number of wounded that our surgical team has treated more than tripled in three months. Nearly one out of every five operations today involves people with gun or knife wounds. We have not seen this level of violence in since we arrived in Masisi in 2007.

What explains this upsurge in violence?

There are many armed groups in the region and the slightest disputes are resolved by violence. People are threatened and attacked every day at home, in the fields and on the road. These attacks are often motivated by money, but we are seeing increasing numbers of purely gratuitous attacks and ethnically-motivated assaults. They are perpetrated by armed groups but also by civilians who belong to other communities.

Who are the primary victims?

The wounded patients admitted to the hospital include armed men, of course, because the region was the scene of considerable fighting over the last few weeks. But we are also seeing a growing number of civilians, including women and children. In some cases, the violence has reached horrifying levels. On November 4, the village of Shoa, which is located a few kilometers from the town of Masisi, was attacked. Seven people who died from machete wounds were brought to us at the hospital. The victims included two pregnant women and a baby. Later, on November 29, following a series of attacks in the village of Kihuma the MSF teams treated 32 wounded patients, 8 of whom were suffering from violent trauma. This unprecedented violence left seven people dead that day.
Is MSF also seeing an increase in rapes?

In Masisi, our teams usually treat between 40 and 70 rape victims every month. In November, our teams treated 20 victims of sexual violence. We fear that this reduction is not a good sign. Unfortunately, violence towards women has not dropped all of a sudden. Insecurity and rising ethnic tensions create obstacles for people who need to come to the hospital or a health center. People are afraid and remain at home, often risking their life.

What is the direct impact of this new situation on people’s lives?

There are nearly 40,000 displaced persons around the two villages of Rubaya and Kibabi alone. These families are living in extremely precarious conditions and an outbreak of cholera made their situation even more desperate. In addition, people are afraid to go to health centers. With the exception of emergency visits, where we see a sharp increase in the number of victims of violence, admissions to the Masisi hospital have dropped considerably. We know the need is there but people are afraid to leave home. For example, there are many at-risk pregnancies in the region. In this area we have found that between five and 15 women out of 100 require an emergency Cesarean section. In the last few weeks, many fewer of those women have come in. In November, half of the beds were empty, while normally, most of our beds are occupied. It’s very worrisome. These women have no other alternatives and will be forced to give birth alone, without help. We know that some of them will not survive.

What are the consequences for MSF?

When people are less willing to leave home, MSF’s teams must go to them. We often have to cross front lines to provide medical care. We also provide an ambulance and referral service to the hospital. At the displaced persons’ camp in Rubaya, we support a health center and have set up a cholera treatment center. Over just three weeks, the team provided more than 3,000 consultations and our cholera treatment center admitted 199 patients. Unfortunately, four of those patients died. The needs are huge and there are very few other NGOs.

We would like to highlight the humanitarian situation in this remote territory, and to see more aid organizations coming or returning as the needs are high and the situation is unlikely to calm down in the near future. Masisi territory has nearly as many people as the city of Goma and the humanitarian needs there are at least as significant. However, there are many fewer organizations working there. After the last few weeks’ fighting, the MSF teams find themselves alone. The violence in Masisi is receiving less media attention, but it is just as critical.


MSF has supported the General Hospital in Masisi since 2007 and provides free primary and secondary care there. Between January and September 2012, MSF hospitalized more than 5,800 patients, performed 1,320 surgeries and admitted 462 malnourished children and 653 pregnant women.