Voice From the Field: A Clinic Deep in the Bush

When fighting erupted in Lekwongole, MSF clinical officer David Bude fled along with the rest of the population and used his medical skills to save lives in exceptionally difficult circumstances. 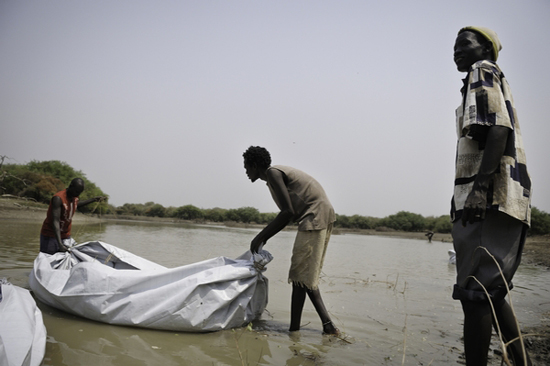 Displaced people use plastic sheeting to transport supplies along the Pibor river. 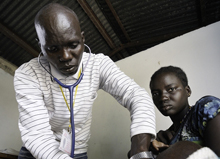 David Bude examines a patient at the MSF clinic in Pibor.

David Bude is a Doctors Without Borders/Médecins Sans Frontières (MSF) clinical officer working in a remote outreach health clinic in the village of Lekwongole, near Pibor town in South Sudan’s violence-wracked Jonglei State. When fighting erupted in Lekwongole in August 2012, David fled along with the rest of the population. Hiding deep in the bush, he used his medical skills to save lives in exceptionally difficult circumstances.

Fleeing for our Lives

We ran from Lekwongole when there was shooting. I was frightened, and so was everyone else, because of what we had seen—because of the dead people.

I said to my wife that if we stay we will be killed. It is better to run to the bush because we know where we can hide ourselves.

We crossed the river using plastic sheeting as boats. We tied the lengths of plastic and put grass inside to make it more stable, so it would not collapse when we stepped inside. We ferried our children to the other riverbank, and then we ran, all of us, with our children and families. We didn’t have time to take any food or even any clothes or medicines. Everything was left behind.

Deep in the Bush

We were deep in the bush. There was thick grass and undergrowth everywhere, no roads or tracks. I was scared—everyone was scared. You can’t see what is in the thick tall grass, and there are lots of dangerous things: snakes, hyenas, we heard lions at night. And there were the rebels and militia. You don’t know what will happen at night, or even during the daytime.

The area was flooded, so there was lots of water everywhere. Most people were just sleeping under trees without anything for shelter. Some had some plastic sheeting with them and when it rained they would invite other people’s children to take shelter. We helped each other because we were all there in the bush together.

The Clinic under the Tree

I chose a big tree, a good one with plenty of shade, and I cleared the brush underneath it. I had a plastic sheet and I gave it to my wife to make a sort of rough shelter. She cut some branches and made a frame, like a manyatta house, and we put the plastic sheeting over it. And then I made a wooden platform, like a rough bed, to keep the medicines off the ground. This was my pharmacy.

We cut some poles to make benches, so there was a waiting area for people to sit. And with poles and mud I made a sort of consultation room, so when a patient needed treatment I would see them in this “room.”

We got a message through to the MSF base team in Pibor town about where we were, and they sent some drugs by boat to the closest place a boat could get to—medicines for antenatal care, for diarrhea, for malnourished children, antibiotics, dressings, malaria drugs, even registration cards and a register for keeping proper records.

I found two of the health promoters from MSF’s Lekwongole team. They went around passing the message that if your child is sick with anything—diarrhea, eye infections, respiratory diseases, fever, or any injuries—they could come and see us.

And they came. A lot of people. Sometimes I saw 50 patients in one day. Malaria was common, and [so was] pneumonia. Children that were malnourished—we admitted 16 for malnutrition—cases of diarrhea because there was no clean water, and even a tuberculosis patient who needed a follow-up. I kept working until the supply of medicines ran out.

Running Out of Medicine

In early September we finished our stock of medicines, so I went back to Pibor town for more supplies. I went by foot, but the floods were bad this year. Everywhere there was water, and I had to swim across what had been small streams. I walked and swam for nearly two whole days to get to Pibor.

The MSF team in Pibor found a boat for me to go back to the bush. When we finished that stock, I came back again by foot with three guys from my medical team, and again we returned to the bush by boat with medicines for the clinic under the tree.

With this clinic we definitely saved lives. People were in real difficulties in the bush: not enough food, mosquitoes biting people, everyone drinking very bad water.

I remember a young man who came during the night with severe malaria. He was crying out in the darkness, writhing around. We tried to calm him and I did a rapid malaria test, which showed positive. I started administering Artemether [an antimalarial] injections. That was just after midnight.

We had a sort of inpatient department, but the problem was that I had nowhere to keep the inpatients. I made sure they stayed nearby so if I needed to follow up with any of them, or give them medication, I could go and find them easily. I kept children with severe malaria right by the clinic for several days until they showed signs of improvement. And it was important for me to go and find the mothers of sick children to make sure they remembered what I had said about the medicines they had to take. And I had to do follow-up checks and sometimes give out new drugs to these patients.

There was one trauma patient who came just when we had run out of gauze. I just had to apply pressure and try to stop the bleeding. We didn’t have IV fluid to give the patient, so it was very difficult, but eventually I managed to stop the bleeding and some days later he recovered.

None of the patients I treated died. Only one patient who had been shot was already so weak when he arrived that I could not save him.

However, because this was in such a remote place, it is hard to know how many people died because they fell ill and couldn’t come to be treated.

I think about the people who fled to places that were too far from my clinic. We saw lots of cases of malaria, so what has happened to the people who could not get medical treatment? I think the situation for them must have been very bad indeed.

Our clinic was not perfect, but it was better than nothing, and we saved lives.