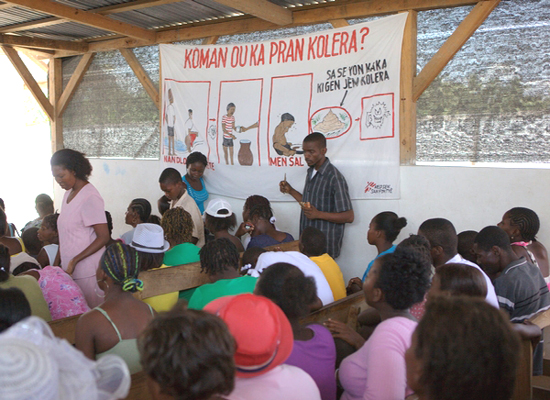 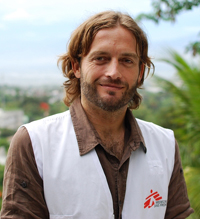 Doctors Without Borders/Médecins Sans Frontières (MSF) Head of Mission Joan Arnan has been working in Haiti for five months, coordinating MSF’s response to the cholera epidemic that has been sweeping the country since October 2010. Here, Arnan explains the response and discusses the difficulties faced by the Haitian Ministry of Health and its international partners in responding to the epidemic. Failures in the epidemiological surveillance system make it impossible to deploy an adequate response in strategic locations, and the dearth of cholera treatment services in national health facilities—along with the withdrawal of several nongovernmental organizations (NGOs) following a decrease in international funding—are hampering the national response to the epidemic.

When I arrived in Haiti in February, the country had already seen three peaks in the epidemic: the first between October and December 2010, the second between March and May 2011, and the third between September and November 2011. More than 500,000 people, or 5 percent of the population, had already been affected by the disease, and about 7,000 had died. Cholera is new to Haiti, and it is still difficult to predict the pattern of these "peaks."  Less than one-third of these people had a safe supply of drinking water in April 2012, and only 1 percent received soap. People don’t have the means to take the hygiene measures needed to protect themselves, so as soon as it rains and the sewers overflow, the chances of exposure are greatly increased. Nearly half a million survivors of the January 2010 earthquake are still living in camps.

When I arrived in Haiti, we expected a renewed outbreak with the start of the rainy season. In April, the number of patients in our cholera treatment centers (CTCs) began to increase, reaching a peak at the end of May. Since the beginning of the 2012, we have treated more than 10,000 patients, including more than 70 percent of all cholera cases reported in Port-au-Prince during the peak of the epidemic. Our teams are now seeing a drop in the number of cholera cases in Port-au-Prince and Léogâne, but the health situation remains critical. Nearly two years after the start of the epidemic, MSF is still treating many of the patients in the capital. This reveals a number of problems with the management of the epidemic at national level.

In the metropolitan area of Port-au-Prince, where nearly a third of Haiti’s population lives, the public health facilities have not integrated cholera treatment into their services, which means that if you present at a public hospital with cholera symptoms you will be referred to the CTC of an NGO like MSF. In the department of Artibonite, where approximately 20 percent of all cholera cases have been reported since the epidemic began, some CTCs are facing medical supply issues, and some of the staff have not been paid their salaries since January. This has direct consequences for patient care. However, these situations are in contrast with the successes in Nord department, where the local health authorities responded well to the last peak in the epidemic. This calls into question the national authorities' political will to set up an effective national cholera response system.

This situation is further complicated by the decrease in international funding, which has reduced the number of NGOs working on cholera—whether on the medical care level or the prevention level with activities concerning water, hygiene, and sanitation. There are fewer and fewer operators engaged in the fight against cholera in Haiti, but the population is still vulnerable to the disease.

Successful coordination of responses to the epidemic between the remaining operators depends on quality, reliable epidemiological data. Yet the World Health Organization’s (WHO) support to the Haitian government in setting up an effective epidemiological surveillance system—which would make it possible to adapt the cholera response in strategic locations—has been lacking.

As a nongovernmental emergency medical aid organization, it is not MSF's purpose to assume the responsibilities of the Ministry of Health and its international partners in managing the epidemic at a national level. We can, however, assist the Haitian health authorities during peaks in the epidemic, and provide Haitian health facilities with technical and logistical support to help facilitate the integration of cholera treatment. Integrating cholera treatment services within existing national health facilities would increase and decentralize treatment capacity, giving patients rapid access to treatment. Cholera can kill in a few hours. It is therefore vital that specialist treatment centers are accessible, so that patients can receive treatment as quickly as possible when the first symptoms appear.

Nearly two years after the start of the epidemic, we are still waiting for concrete actions that demonstrate the commitment of both the Haitian health authorities and the international community to tackling this epidemic. The creation of a national contingency plan; the provision of cholera treatment services in public health facilities; the creation of an effective epidemiological system; and an increase in water, hygiene, and sanitation activities are urgently required to effectively tackle cholera in Haiti.

Since the start of the epidemic in October 2010, cholera has killed more than 7,300 people out of the approximate 575,000 cases reported. As soon as the first cases were confirmed, MSF launched an unprecedented operation across the country, treating, on its own, more than 30 percent of the total number of patients.

Now, MSF is continuing to treat people with the disease through 5 CTCs around Port-au-Prince and Léogâne, and is lobbying for greater involvement from the national health authorities and their international partners in the fight against cholera.