Voice From the Field: A Tale of Healing and Music 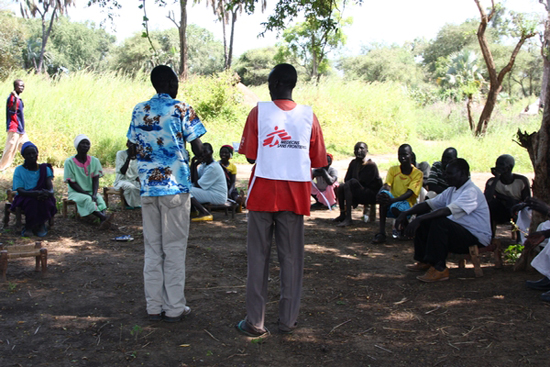 Athena Viscusi was recently in South Sudan working as Doctors Without Borders/Médecins Sans Frontières (MSF)’s Mental Health Officer in the Jamam refugee camp in Maban County. Athena’s mental health team was made up of refugees she had trained in psychological first aid, providing education on stress and trauma, basic psychological support, and detection of more serious cases for referral to the mental health officer and the medical team. In addition, a group of 13 musicians, singers, and actors have been trained to deliver messages about mental health and MSF’s services through weekly performances throughout the camp.

Here, Athena tells the story of one particular patient who left an indelible mark on the team:

Khaled* is a 30-year-old man, tall and thin, from the Ingessana Mountains in Blue Nile State, Sudan. He first came to the attention of MSF staff when he wandered into our compound, disoriented and disheveled, with one of his friends who was working with us. At that time, we didn’t yet have a mental health program, but as soon as I arrived as mental health officer, his friend was sent to get him. I spoke to him through my interpreter, but he answered mostly in whispered monosyllables and hand signs. He said he was married but that his wife left because “my mind is not good.” When we asked him if he had children, he held up three fingers. He also said that he had been a soldier, but not for how long and when.

We started him on an antipsychotic drug. His friend assured us he would take the medication and we asked him to have members of Khaled’s family return so we could get a better history. He came back with two aunts who told us that he had been a soldier for about five years. He had arrived home last year, confused and uncommunicative. Shortly thereafter, there was an attack and he fled his home with his family. His aunts told us that when they arrived in Jamam, Khaled’s wife took their children and moved to her parents’ compound.

Khaled returned to the clinic once more on his own, still not talking but smiling, making better eye contact, and wearing clean clothes. He followed my interpreter and me around for a couple of days during our visits in the camp.

Then we didn’t see him for a while. We tried to find him at his family’s compound but were told he was at his wife’s tent. We tried to visit him there but that portion of the camp was flooded and inaccessible. He turned up at the clinic door one afternoon very dirty and clearly responding to auditory hallucinations, jerking his head and talking to the air. We asked him to wait to see one of our medical staff, but he wandered off. So we put word out in the camp that we were looking for him, but no one brought him in.

"A woman approached us and said that she had seen Khaled’s progress. If we had been able to cure him, maybe we could help her husband who had become reclusive and would not leave their tent and help her care for their eight children."

The clinic registrar, Hamid, was a teacher for many years in Blue Nile and knows many people and their relationships to each other. One day he recognized Khaled’s father in the clinic and brought him to meet us. Khaled’s father, Anur, is a sheikh (community leader) in his village. He told us that he and his son no longer have a good relationship since Khaled became ill. Khaled had become quite well-known among his people, who had seen him wandering disoriented throughout the camp. He told us that Khaled had always been well-liked and respected before his illness and was known for playing the rebaba (a traditional instrument similar to a banjo) and singing. I told the sheikh that it was my wish to see Khaled playing and singing before I left South Sudan. He assured us he would make every effort to bring him to the clinic, but we didn’t see either father or son for several weeks.

Eventually Khaled wandered in on his own, with better hygiene and a better demeanor. Our clinical officer, Robert, who is also a psychiatric nurse, wanted to make sure Khaled would stick to his medication this time, so we asked him to return with a family member who could ensure his compliance. Khaled obliged, and the cousin he brought in agreed to supervise him.

When his medication ran out, he returned on his own to renew it. He was calm and pleasant, smiling, and greeted me in English. By then, several people during our visits in the camp had reported seeing him and how pleased they were with his recovery. “Khaled is good now,” they said. “He is talking with the people.”

We went to visit the area of the camp covered by Sheikh Anur, Khaled’s father. Khaled came out to greet us and introduced us to his seven-year-old son. A woman approached us and said that she had seen Khaled’s progress. If we had been able to cure him, maybe we could help her husband who had become reclusive and would not leave their tent and help her care for their eight children.

As we were talking to her, Sheikh Anur approached us. He expressed his gratitude for curing his son and said, “Now he is back in his body.” As a token of appreciation, he gave us what he said is a powerful protection against snakes. If you wear it, you will not get bitten even if you step on a snake. Apparently Sheikh Anur is a well-respected kujur, or tree medicine doctor.

We asked Khaled to join us at the musical performance we had scheduled that day and he followed us there. After the theater piece, he asked to borrow the rebaba and played and sang several numbers. The crowd kept asking for more. I learned that Khaled used to perform on the radio back in Blue Nile. The musicians in our group said it was an honor to play with him, as he is so well known, and that they were proud to be part of the work that had restored him to health.