Though the situation has calmed somewhat since June, some areas are still marked by instability and a lack of access to medical care. 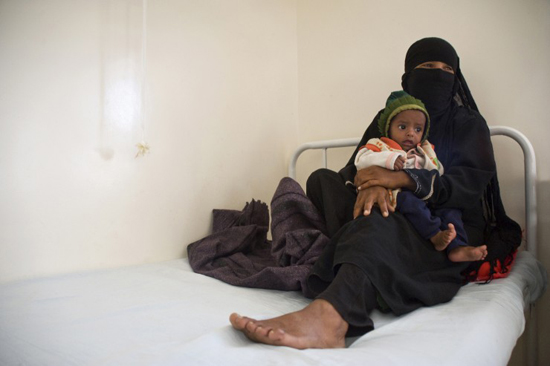 A mother and her child at an MSF feeding center in Amran governorate last year.

Aspirations for change, secession claims, and tribal conflicts are all fueling tensions in Yemen. Though the situation has calmed somewhat since June, some areas are still marked by instability and a lack of access to medical care. Caroline Séguin, Doctors Without Borders/Médecins Sans Frontières (MSF) medical coordinator in the capital, Sana’a, and Teresa Sancristoval, MSF operational manager, described the current situation.

What is the situation now in Yemen?

Caroline Séguin: In the capital, Sana’a, large anti-government protests driven by the so-called "Arab Spring" took place between March and May. These protests caused many wounded and dead. But since President Saleh left for Saudi Arabia in early June to seek treatment [for injuries he sustained during the bombing of his compound], the tension has generally declined in Sana’a. However, there are still many armed groups in the streets and at check points.

How is the current crisis affecting the population?

Teresa Sancristoval: Despite the decline in tension, the situation in Sana’a is still quite volatile and affects the daily lives of Yemenis. The prices of the main food commodities increased 43 percent on average since January 2011, according to a recent World Food Program report. There are continuous power cuts in town, and the scarcity of fuel has led to the creation of a huge black market with prices up by 500 percent. There have been protests due to difficulties in getting water and fuel, as well as the lack of electricity.

Several hospitals have struggled to keep their activities running due to the lack of electricity and fuel. They have back-up stocks which only last one or two days.

In addition, the presence of weapons in town has drastically increased. Tensions between tribes and neighbors that before were resolved peacefully are now likely to be resolved with violence.

Some neighborhoods are deeply affected. In places such as Al Hasaba, part of the population has been displaced due to heavy fighting. Various armed groups control different parts of the city.

In general, life for the civilian population is deteriorating rapidly and the people are really concerned about their capacity to cope with the situation.

What has been the health authorities’ response to the medical situation?

Sancristoval: It is important to highlight that the response of the Yemeni health system to the emergency has been quite good. The private and public health sectors have mostly been able to cope with the influx of injured people and are providing quality services.

What emergency activities are MSF running?

Sancristoval: MSF is supporting the Yemeni health providers and covering certain gaps. We have an emergency set-up in place. Since the beginning of the demonstrations, we have worked closely with the emergency department of the Ministry of Health, student health committees, and private and public medical facilities. We have assessed the main hospitals to see if they were prepared to deal with mass casualties and offered our support; in some of them we have provided training and donated drugs. We also have emergency teams ready to intervene if needed.

The country is going through a period of instability that affects each region and population to varying degrees. The increase in prices and the shortage of fuel, electricity, and water is having more of an effect on rural areas. We are therefore trying to focus our intervention on the most affected regions.

MSF is closely monitoring the situation. We have reinforced our emergency teams in Aden and Taiz in the south, but for the moment we are not seeing any outbreaks or medical emergencies in these areas.

Séguin: For one month, an MSF team was working in a hospital in Sana'a. The team treated some 200 wounded in the emergency room—most of them not directly linked to political violence—and carried out more than 100 surgical procedures, especially for trauma injuries. But we are now leaving the hospital because the medical needs have changed.

We are now working in the south, in the city of Taiz, where tensions remain high and where the presence of armed forces disrupts humanitarian assistance There is a frontline throughout the city, with the regular army on one side and armed tribal groups on the other. Two months ago, we organized an ambulance system to transfer injured people to a private hospital near the frontline in the city and set up a mass casualty plan.

The most significant conflict zone is currently in the Abyan governorate, east of Aden [near the southern coast]. Heavy fighting between Islamists, tribal militias, and the regular armed forces is causing major population movements, and some 80,000 people have fled the area of Zandjibar. We are supporting a clinic for people who have sought refuge in Aden. We are currently assessing the situation and the needs in the Abyan region, but we are facing difficulties due to high insecurity.

What are the major issues causing a lack of access to healthcare?

Séguin: In the governorate of Abyan, fighting is the major obstacle. However, in large cities, the problem is different. Sana’a, Taiz, and Aden have well-equipped hospitals. During the protests however, injured civilians would not seek treatment in these hospitals for fear of being reported or being faced with the elements of the security forces. In Taiz, two hospitals have been ransacked, and a tank is positioned close to another hospital. For all these reasons, the wounded try to seek treatment in private clinics.

As the situation remains economically unstable, including issues such as lack of fuel and a large increase in the cost of living, and while the power vacuum continues, we are ready to intervene if necessary.

How have MSF’s regular programs in Yemen been affected?

Sancristoval: We have increased our regular programs in Lahj [near the southwestern coast], Haradh, Sa’ada, and Amran [all in the in the northwest]. MSF was working in Yemen prior to this most recent crisis. For many years, the country has been affected by armed conflict in the north and in the last year, there have been strong secessionist tensions in the south. We have projects running in both areas. They have been functioning quite normally since the beginning of the unrest, but we are now facing challenges with the shortage of fuel and the increase in prices, and we have had to cancel many of our vehicle movements. We have also seen an increase of patients in our nutritional programs.

What are the main challenges for MSF in Yemen today?

Sancristoval: Our main goal is to provide quality care for the population in distress. Even though we have significant activities in the country, we are still struggling to reach some areas due to insecurity. Our work in Yemen requires tight security management and much effort in ensuring we are accepted as an independent medical humanitarian organization by the population and the relevant authorities.