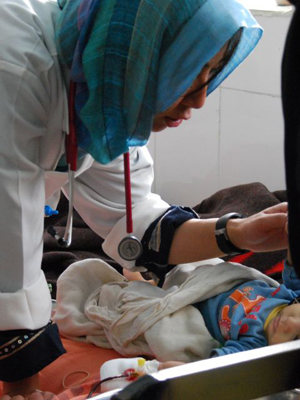 The five-year conflict in Northern Yemen is once again escalating and putting pressure on healthcare facilities.

In the north of Yemen, what is being referred to as a "sixth war" between the army and the Al Houthi rebels began on August 11. Once again the population is subjected to violence and deprived of health care. Doctors Without Borders/Médecins Sans Frontières (MSF) is providing medical care to the wounded and assisting the displaced as much as the security conditions allow.

Following clashes in recent weeks, the conflict between the Yemeni army and Al Houthi rebels is intensifying and involves the use of heavy arms and aerial bombardments. This "sixth war" is the latest confrontation between government troops and the Al Houthi rebel movement. This conflict has held Northern Yemen in the grip of violence since 2004.

Thousands have fled the fighting and are displaced in the northern part of Saada—in the northwest of Yemen—as well as the nearby governorates of Hajja, Amran, and Al-Jawf. MSF has evaluated the needs in the villages of Baqim and Yesnem, in the north of Saada, and is now organizing medical aid for the roughly 30,000 people who have sought refuge.

The fighting does not spare the health facilities and poses a security threat for patients and health staff alike. MSF maintains contact with both parties in the conflict to insist on the need for patients to be able to access health care and to assure the safety of personnel.

"MSF maintains contact with both parties to the conflict to insist on the need for patients to be able to access health care and to assure the safety of personnel."

In spite of the delicate security situation, the MSF medical teams continue to work alongside the Yemeni ministry of health in two rural hospitals in Razeh and Al-Talh. Since August 11, some 63 people—including 36 war-wounded—have been admitted for emergency medical care in the latter facility. Of these, 33 needed surgery.

The difficulties of travelling the main roads hinder access for the population—especially the injured—to health facilities. In addition, MSF has had to temporarily suspend mobile assistance which was initiated in July to 10 health centers in Saada.

The unstable transport of medical supplies is becoming a growing concern that might cause stock interruptions in outlying health centers. Upon request from both parties at war, MSF has donated 10 medical kits to local health centers containing medical and surgical equipment.

Between January and July 2009, MSF teams have performed 30,000 consultations in Saada, including 8,000 emergency interventions and 1,450 hospitalizations. About 720 acts of surgery have also been carried out—some 100 of them were related to war injuries. MSF has been working in the governorate since September 2007 and currently operates two projects in the Razeh and Al Tahl hospitals as well as providing primary care in several outlying towns.