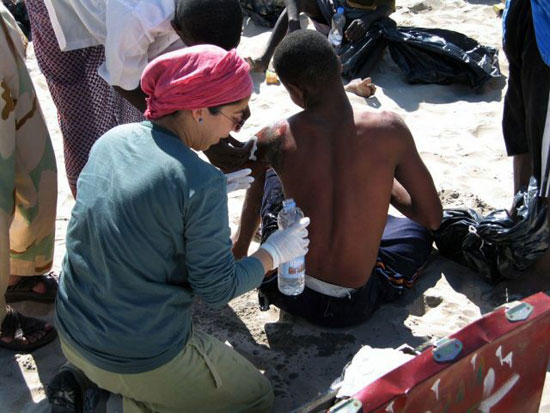 “I have no choice …even if I die in the sea I need to get to . Maybe I have a chance to survive, but if I go back to , I will die.”
—27-year-old Somali man from who lost two relatives.

Every year, thousands of people risk their lives crossing the Gulf of Aden: Somalis fleeing the fighting in their country and Ethiopians leaving because they cannot find work back home, for political reasons, or because of the conflict in the Somali region. Conditions of the voyage are terrible and on almost every crossing people die. This year alone an estimated 28,000 people arrived at the along the coast of Yemen, with 651 confirmed dead and another 659 missing.  The actual death toll is probably much higher. Since September 2007, when Doctors Without Borders/Médecins Sans Frontières (MSF) started our project, we have provided medical and humanitarian assistance to over 3,000 refugees and migrants arriving on the coast of Abyan and Shabwa governorates in southern Yemen. Many people arrive exhausted and mentally traumatized. They tell harrowing stories of death and survival. But what the MSF team was confronted with on December 15, 2007, was far worse than anything they had witnessed before. Ingrid Kircher, a humanitarian affairs officer in the MSF team, writes about the events of that day.

It started out like an ordinary day—we got up at around 6 a.m. to get ready to hear from our local contacts along the shore. As we did not hear from them, we set out to check ourselves. Just as we were about to leave, we got a call that a boat had arrived during the night near a military checkpoint about two hours from our base and that many people had died.  We quickly jumped into the cars and drove along the coast, worrying about what we would find. Our team was: Akram, a doctor; Cristina, the nurse; Ahmed and Zenebe, our counselors; Sasha, the team coordinator; the humanitarian affairs team, Hussein and I; and our two drivers, Adni and Salem.

When we arrived at the checkpoint, we encountered a group of about 50 people sitting or lying outside under the little shade the military barracks provided or near by.  Many of them were in bad condition, very exhausted, sick, and looking very sad, some with tears in their eyes. Team members unloaded water, biscuits, therapeutic food, and dates, and distributed them. The medical team quickly walked among the group to see who needed urgent medical attention. They set up the medical box in the sand and started their consultations. Meanwhile, our counselors explained MSF’s role and our activities on the coast, and tried to find out who needed more psychosocial help.

Many people complained about body pains from being forced to sit in a cramped position for the three days of the trip. Others said they had headaches from sitting under the scorching sun in the boat without any water or food. Many had bruises and hematomas—the buildup of blood in one area of the body due to a broken blood vessel—all over their bodies, the signs of severe beatings. “We were treated like animals, not as human beings,” a 25-year-old woman from Mogadishu, who had beating marks all over her body, explained to our nurse. A 25-year-old Somali man from Merca added, “They were beating us every second with sticks and guns.”  Cristina applied more than 30 wound dressings.  She referred those who showed symptoms of anxiety and stress to our counselors.

Forced to jump into the water

As Hussein, Zenebe, and Ahmed started to speak to the people, the grim picture emerged.  We were told that the boat came towards the Yemeni shore at around midnight. “The boat stopped far away and the passengers were forced to jump,” a 25-year-old Somali woman who had come with her husband from Mogadishu told us. “The passengers refused, because it was deep water, and asked that the boat go nearer. Then we were beaten severely. Then most of the passengers moved to one side of the boat, and the boat capsized.  Most of the people drowned, as they could not swim.”

“I was one of the first people who were forced to jump,” said a 27-year-old Somali man from who lost two cousins. “When the boat turned over, I fell into the water. At the time I could not move my legs. As I was struggling to swim I found a five-liter jerry can, caught it, and held it to my chest. When I reached the shore, I crept to the dry land. I was paralyzed and could not do anything.”  Many others did not survive. A 25-year-old Somali man from Merca told us, “When the boat turned over, I and my wife swam to shore. When we reached the shore, my wife died and I saw my kids—they were dead.”

Several people told us that, when the boat left Bossaso, their port of departure on the Somali coast, there were 148 passengers altogether. We counted the survivors—there were 49, which meant that almost 100 people were dead or missing. It seemed that very few of the Ethiopians on board had survived, as one Ethiopian whom we interviewed said, “We were 50 [Ethiopians] when we left, and now we are only eight.”  A young Oromo who traveled with a group from his village in Bale Region told us, “We were 10 from our village on the boat, and now we are only three. I identified my dead brother on the beach, but the other ones are missing.”

This boat, an approximately eight-meter (26-foot) fiberglass structure, had been extremely crowded, even more so than usual (usually there are an average of 90 to 120 people on board). We were told by the new arrivals that the reason for this extreme overcrowding was that there were more people waiting in Bossaso to cross because of the increasing fighting in Somalia. Some survivors told us they were sitting on top of each other. One of the Oromo men told us, “I was sitting below in the hull, on top of a body. I was shocked and asked if the person is alive. I cannot sit on a body, but when I wanted to get up, they hit me. I wanted to jump into the water…”

To cram as many people as possible into the boats, people—mostly the Ethiopian passengers—are put in the lower part of the deck—in small, windowless spaces normally meant for storage. There conditions are even worse, because people cannot get enough air to breathe and it is even hotter. This time, survivors told us that there were at least 20 people in the space below. At least four people died during the trip. A 25-year-old man from Mogadishu described to us, “Some people died in the hull because they were not given any food and water and it was hot and crowded inside. When someone tried to take air, they beat them.” When the boat capsized, the people in the lower part were trapped under the boat and died.

As the medical team continued their work and the counselors provided support to the many people who had lost close family members and friends, Adni handed out kits, containing clothes, flip-flops, and soap. Worried that the new arrivals had been sitting in the scorching sun for hours, he set up a tent on the side of the truck to provide additional shade.

In the meantime, Sasha, Dr. Akram, and I went to the beach to see whether there were any survivors and to gather more information about how many had died. When we arrived at the shore, we saw dozens of dead bodies—they were spread out over about a five-kilometer (three-mile) stretch of the shore. It was a terrible sight—some were still floating in the water, others were lying on the shore, some with their bodies half-buried in the sand, others with their faces down. There were a large number of women and we also found five children, the youngest one we were later told was eight months old. We counted the bodies—altogether 56.  Zenebe and Adni joined us with body bags and white cloth and started covering the bodies to restore some dignity. As we were walking, we saw a few grief-stricken survivors looking for their missing relatives. A Somali woman and a young man, her nephew, told us that she was looking for her sister and two nieces, while her nephew was missing his uncle. An Ethiopian man had come to look for his sister. As we had arrived at one end of the stretch of coast, we saw the hull of the overturned boat sticking out of the sea. It was incredible how almost 150 people could fit into this eight-meter (26-foot) boat.

As we returned to the checkpoint, the survivors were finally transported to the reception center. As they got on the truck, and we said goodbye to them, I was left feeling angry at what these people had to go through, when all they wanted, as a 25-year-old Somali woman from Mogadishu put it was, “to live in a safe place and work.”

Back at our base, we all gathered to debrief about this terrible day. It had been very tough for the team, but what helped us was that everybody had worked together and done what we could to help the survivors. As we wondered how we had been able to cope with this terrible tragedy and go on with our work, Zenebe expressed what we all felt when he said, “I went to the beach. There, I saw so many dead bodies. I could not believe it. I closed my eyes, but when I opened them the bodies were still there, with crabs running over them. I was shocked and wanted to do something. So I went back to the truck and, together with Adni took the body bags and started putting bodies in the bags. I kept on walking and covering the dead bodies, but in my mind I was not there.”