Fighting in Saada leaves injured cut off from medical care 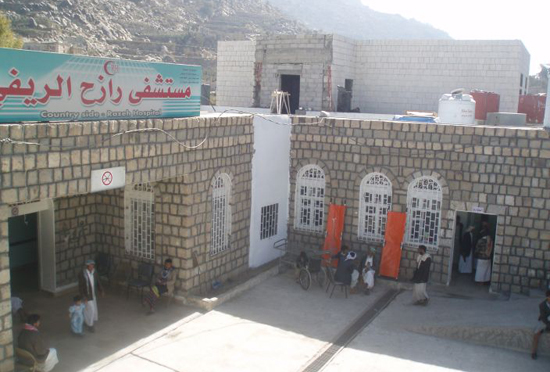 Patients in the courtyard of Razeh Rural Hospital in Northern Yemen, where MSF provides emergency medical treatment and mother-and-child care.

One month ago, war returned yet again to the governorate of Saada, with numerous clashes involving heavy weaponry. For the time being, access is impossible, but there is reason to suspect the area contains injured people.

On Tuesday, June 17, Doctors Without Borders/Médecins Sans Frontières (MSF) teams working in the governorate of Saada were evacuated to Sanaa, the Yemeni capital. The decision to suspend activities in this region of North Yemen comes at a time of heavy fighting. Since May 10, MSF had been unable to deploy assistance in satisfactory conditions, whether for treating injured or assisting displaced persons.

It is difficult to know precisely what is happening in the areas of fighting, or areas controlled by the rebellion: access is prohibited for security reasons; there are no independent observers present; and most communication networks are severed. No numbers are available concerning dead or injured. However, the use of heavy weapons, aerial bombardment of villages, and information from other sources all leads to concern for civilian casualties.

Yet, most civilians have no access to adequate care structures. Civilians cannot always get to a hospital, either on account of the danger of travelling through the fighting, or because they fear being accused of supporting the rebellion, and therefore of being arrested. Even for medical staff, access to hospitals and health centers is complicated, sometimes impossible.

Over the month between May 10 and June 8, only 56 injured, including 36 civilians, were treated in hospitals assisted by MSF, often in difficult conditions.

At Haydan, which received the majority of the injured cases treated by MSF (49 patients, including 31 civilians), members of the MSF team who were not Yemeni as well as those from other regions of Yemen had to evacuate to safety. The local staff continued to provide care, but with limited means and in perilous conditions. On May 27, these staff also had to abandon the hospital, managing nonetheless to take with them a limited quantity of equipment to allow improvising a treatment room in a shop in the village. Since June 9, the only staff left at Haydan have been a medical assistant and two nurses, of whom there is no news; the most qualified staff managed to reach Saada.

Furthermore, where MSF did receive precise information concerning injury victims requiring treatment, it was impossible to bring them in. This was notably the case at Dahyan, a village under rebel control, located a ten-minute drive from Al Tahl, which lies in the government zone. Before the war restarted, MSF gave consultations six days a week in the village. On May 11, the MSF team treated 25 women and children there who had been injured in shelling. Since their condition demanded evacuation, two ambulances left Al Tahl to pick them up after obtaining permission from the authorities. However, on account of heavy firing in the vicinity, the team was unable to evacuate them. The injured were aware that the ambulance had gone back. MSF later learned that seven of these patients died over the next 24 hours. Since then, there has been no news of the situation in Dahyan.

Another consequence of the war, the most visible so far, is the number of people streaming out towards Saada or Al Malaheed, another town in the west of the governorate. These movements took place once tensions started rising in the region, or in the first days of the war.

In Saada and the surroundings, the International Committee of the Red Cross (ICRC) and Yemeni Red Crescent estimate the number of IDPs at over 35,000. Some have rented houses or are staying with relations; others are installed in six camps around the town. Additionally, in the vicinity of Al Malaheed, MSF has recorded just over 1,000 families, dispersed in small groups. MSF has also received information concerning movements towards the north of the governorate, but cannot travel to that area.

Where MSF teams have been able to assess the situation, at Al Malaheed and Saada, it was unable to provide assistance to IDPs, for safety reasons and because discussions with the authorities and other aid agencies were not successful.

Given the context — war, and the impossibility of deploying suitable aid to meet the needs of injured and IDPs — MSF therefore took the decision to temporarily withdraw the non-Yemeni and non-local team members in North Yemen. At Haydan, the local team has been scaled back heavily, and there is no more information, while at Razeh and Al Tahl, the local staff continues to provide medical care for patients managing to reach the respective hospitals. MSF continues to negotiate with all sides to obtain access to areas where there is reason to believe there are injured people. Discussions with military leaders and all other authorities in Saada have not so far produced results, and other talks continue at the highest level in Sanaa.

North Yemen: focus on the context and MSF activities before the "fifth war"

Since 2004, the region of North Yemen has been in the grip of a conflict between governmental troops and the Al Houthi rebel movement, whose demands are political, social, and religious. Although several periods of extensive fighting have alternated with cease-fires and attempts at mediation, the latter have never produced a peace agreement, and the region is now in its "fifth war" since 2004.

In this context, MSF began working in Saada governorate in September 2007, at Haydan hospital. Two other projects also saw light, namely, Razeh rural hospital in December 2007, and Al Tahl rural hospital in April 2008. In all of these structures, MSF works in partnership with health ministry staff.