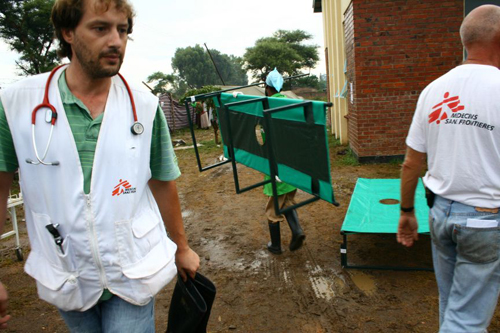 In the town of Chegutu, west of Harare, MSF provided support to an overburdened government cholera treatment center.

Last week, the massive cholera outbreak in Zimbabwe exceeded the World Health Organization’s (WHO) worst-case scenario prediction of 60,000 suspected cholera cases. For the third consecutive week, this was the heaviest week for new cholera cases since the beginning of the outbreak, with approximately 10,000 newly affected people.

In Kadoma City, an area with a population of 98,000, the number of new patients for the week of January 19 was the largest since the outbreak began there in mid-November with 1,752 new cases, more than triple the number of cases seen during the previous peak. Fourteen deaths were reported. A team of 12 Doctors Without Borders/Médecins Sans Frontières (MSF) international field staff and 30 national staff, including nurses, water-and-sanitation technicians, and logistics personnel, helped provide medical care and upgrade the city’s cholera treatment center (CTC), improve water and sanitation systems, and establish ways to control the spread of the bacteria.

The number of patients needing treatment has exceeded the capacity of the city’s CTC, so a number of alternative sites were assessed and a soccer field was chosen. MSF worked closely with other international aid groups to establish a CTC there on January 27 with 250 beds, a 30,000-liter water tank, 20 latrines, waste management facilities, and electricity generation capacity.

Kadoma had been considered a high-risk area for cholera because of ongoing water and sanitation problems. Such a sudden increase likely indicates a contaminated water source as the origin of the infection. An MSF team will remain in Kadoma to respond in Kadoma City and Chegutu district, and to maintain surveillance for new cases in Kwekwe.

The cholera outbreaks in rural areas of Zimbabwe continue. In Masvingo and Manicaland provinces, 1,245 new patients and 11 deaths were reported in the last week of January. In Masvingo Province, the number of cases is still rising in some areas and deceasing in others; new cases are being found increasingly towards the south, in Chiredzi District. Teams continue to find and respond to new cases and outbreaks, and set up new CTCs as needed. One of the main challenges is finding staff for the CTCs, as government nurses are scarce. MSF is doing what it can to help fill the human resource gap. Access to clean water continues to be a problem, particularly in Ruware.

Also in Gokwe North and South, rural areas in the northeast of the country, an MSF team is intervening in a widespread outbreak, setting up small cholera treatment units (CTUs), and carrying out infection control activities, training medical staff, and providing medical supplies.

Because of the difficulties in reaching rural villages and the distances between hospitals, a new health promotion strategy will be implemented. MSF will train community leaders to give oral rehydration salts (ORS), a solution used to treat cholera patients, to affected people at community meetings and to keep a list of the people to whom the ORS is given. Chorine tabs will also be distributed in the communities for prevention.

MSF recently held a health promotion campaign in an area where an increase in patients was reported following several community meetings and funerals. Cholera education and health promotion materials, such as drawings and posters, are given to every CTU the team visits. General health promotion activities encourage the active participation of communities through focus group sessions and discussions on hygiene.