Misery Beyond the War Zone: Life for Syrian Refugees and Displaced Populations in Lebanon 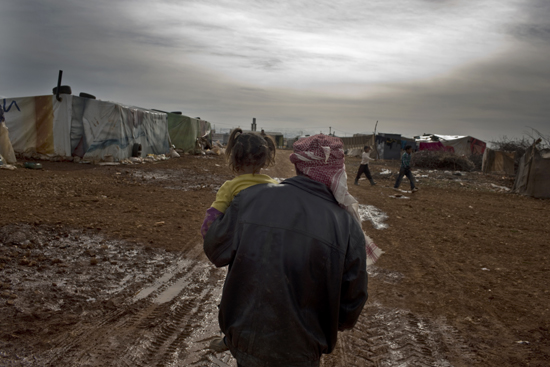 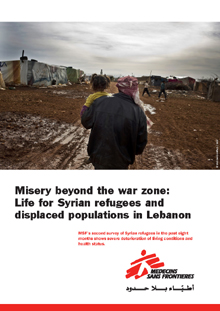 The ongoing crisis in Syria is forcing ever more Syrians to flee their homeland in search of safety. The United Nations High Commission for Refugees (UNHCR) reported in late January that more than 165,000 refugees had officially been registered in Lebanon alone, and that almost 77,000 more were in the process of being registered. An estimated 50,000 additional refugees are believed to be in the country but have not attempted to register formally as refugees. And nearly 500,000 have sought sanctuary in Turkey, Jordan, Egypt and Iraq.

The humanitarian needs of this growing population are immense and growing. Doctors Without Borders/Médecins Sans Frontières (MSF) has been working to provide aid inside Syria since March 2011, though those efforts have been limited by security concerns and access issues. At the same time, however, MSF has expanded its work with Syrian refugees in Lebanon, Jordan, and Iraq.

This report specifically focuses on MSF’s work with Syrian refugees and other displaced populations in Lebanon, where MSF teams are providing urgent assistance and free-of-charge medical care among people now sheltering in Tripoli and in various locations of the Bekaa Valley.

In June 2012, MSF conducted a survey among Syrian refugees and Lebanese people who’d been living in Syria but were likewise driven out by the war. The results highlighted a number of worrisome conditions. Assistance had been quickly deployed in the early days of the crisis, and numerous organizations were still supporting the aid response, but clear gaps were already evident, particularly when it came to access to medical care. Treatment for chronic diseases such as asthma, diabetes, hypertension and cardiovascular disease was already a major concern, in large part because the cost of the necessary drugs was out of reach for many. There were also significant gaps in hospital-level care, with four out of ten interviewees saying they could not access a hospital due to cost, insecurity or other reasons.

Citing the survey results, MSF called for the response to be maintained and reinforced, and in December 2012, MSF launched another survey of the displaced populations from Syria now in Lebanon in order to gauge living conditions and check whether any progress had been made since results of the first survey were released.

This report contains the results of the most recent survey. They show that the gaps in service that existed last spring have not been sufficiently addressed but have in fact widened as more people have streamed across the border. Living conditions among the majority of refugees and Lebanese returnees remain extremely precarious, particularly with winter arriving. More than 50% of those interviewed, whether they were officially registered or not, are housed in substandard structures — inadequate collective shelters, farms, garages, unfinished buildings and old schools — that provide paltry, if any, protection against the elements. The rest are renting houses, but many of those people, now separated from their lives and livelihoods, are struggling to pay the rent.

The medical picture has deteriorated as well. More than half of all interviewees (52 percent) cannot afford treatment for chronic disease care, and nearly one-third of them have had to suspend treatment already underway because it was too expensive to continue. For those who are and are not registered alike, the costs attached to essential primary health care, ante-natal care and institutional deliveries are prohibitive. Among non-registered returnees and internally displaced Lebanese, 63 percent received no assistance whatsoever from any NGO.

The survey showed that the registration process itself is problematic in ways that limit the coverage aid organizations can achieve. In fact, 41 percent of the interviewees said they were not registered mainly because they lacked information on how and where to register or the registration points were too far away. Others worried that they did not have proper legal papers and would be therefore sent back to Syria. Even among those who had registered, MSF’s survey found complaints. Roughly one in four said they had not received any assistance, while 65% said they had received only partial assistance that did not cover the families’ needs.

The specific findings are laid out in this report, but the message they convey is quite clear: Syrian refugees and other displaced people now living in Lebanon have profound humanitarian needs that are not being met. A similar situation is playing out in other countries hosting Syrian refugees as well. If these people are going to find real relief from the conflict plaguing Syria, and if their needs—particularly their medical needs—are going to be met, there must be a more expansive, concerted, and effective humanitarian response.