More than six months after the Islamic Emirate of Afghanistan (IEA) (also known as the Taliban) took power in Afghanistan, Doctors Without Borders/Médecins Sans Frontières (MSF) teams continue to see high numbers of patients in most of our programs across the five provinces where we work. In September, for the first time in years, people were able to move freely without fear of being caught in the conflict. This has led to a significant increase in patient numbers in MSF facilities since September. 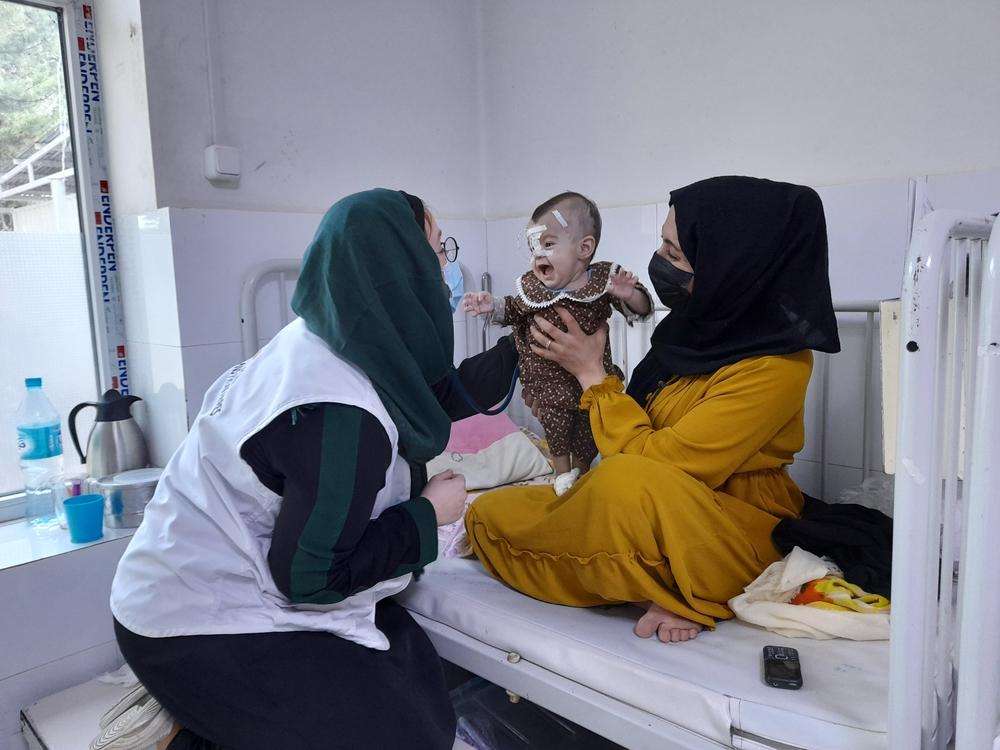 While it is difficult to grasp the situation countrywide, in areas where MSF works, the malnutrition rates  are concerning. MSF’s inpatient therapeutic feeding centers (ITFCs) in Herat and Helmand provinces continue to operate above capacity—there are more admissions than beds available. In Herat, admissions have been increasing since December. Many of the factors that cause malnutrition remain. The economic crisis means that many people struggle to afford sufficient food and persistent drought as well displacement caused by the conflict have left people with fewer reserves to last them over the winter.

The improved security situation that allows people to move freely could be contributing to the rise in the number of malnourished children coming to our facilities. Our ITFCs should be the last resort for malnourished children, yet many patients come to us having received no other health care, such as outpatient treatment for malnutrition or treatment for underlying health conditions that could help to prevent hospitalization. The lack of available care in the community also means we often see children return within weeks of being discharged from our ITFCs as they were not able to access follow-up care. People are also traveling long distances to reach us, further demonstrating the lack of options for those in need of health care.

A rapid increase in measles

MSF is treating a high number of patients with measles in our projects in Helmand and Herat. Our teams are concerned about how the situation will progress unless more children are vaccinated against the disease. In Herat, we saw a rapid increase in cases towards the end of January, and the infection rate continues to increase—we are currently seeing approximately 45 new measles cases in Herat regional hospital each day. In January, the MSF-supported Boost hospital in Helmand province treated over 600 measles patients. We are also seeing high numbers of patients in both locations presenting with malnutrition and measles, which increases vulnerability to severe illness.

The Afghan heath system has been under-funded, under-staffed and dysfunctional for years. Most health facilities in Afghanistan remain under great pressure due to shortages of staff and equipment—some are barely functioning or are closed altogether. This has left many patients unable to access the care they need in public health facilities, while private health care is unaffordable for millions of people.

Despite announcements by the United Nations (UN) and several international donors that some temporary international funding channels would reopen, the Afghan health system is receiving far less funding than it did prior to the change of government in August 2021, and the funding is only guaranteed until June 2022—making the future of the health system even more uncertain. Various donors have re-routed suspended development funding to the humanitarian response to merely keep the system afloat—but humanitarian organizations will never be a substitute for a well-functioning public health system.

The ripple effect of pre-existing sanctions and the financial measures against Afghanistan’s new government are being felt nationwide. The country faces near economic and institutional collapse and tens of thousands of people have lost their jobs and are struggling to find work. The banking sector is paralyzed preventing people from accessing their savings and making it harder for organizations providing health care, including MSF, to pay salaries and cover the operating costs of health facilities.

MSF will pay for additional staff to be recruited at Kunduz regional hospital to assist with treating the high number of measles cases and improve infection prevention and control measures. We are also paying the salaries for staff working in the COVID-19 ward at Khost provincial hospital and in six wards treating patients with multidrug-resistant tuberculosis (MDR-TB) in Balkh, Herat, Kunduz, and Paktia provinces. These facilities used to receive international funding that was withdrawn after the change in government.

MSF continues to be concerned about people’s access to health care in Afghanistan. Every year our teams have witnessed people’s health deteriorate over the winter months. Increased cases of respiratory illnesses exacerbate health problems for people with underlying health conditions and comorbidities.

Our ITFC in Herat continued to operate above capacity in January: Our teams saw a 40 percent increase in admissions compared to December.

On December 10, 2021, MSF began supporting the intensive care unit (ICU) and emergency room (ER) of Herat Regional Hospital’s pediatric department. In January, we triaged over 14,600 patients and admitted over 3,500 to the emergency room. The most common conditions treated in the ER were respiratory tract infections, abdominal pain, convulsions, sepsis, acute watery diarrhea, and measles. 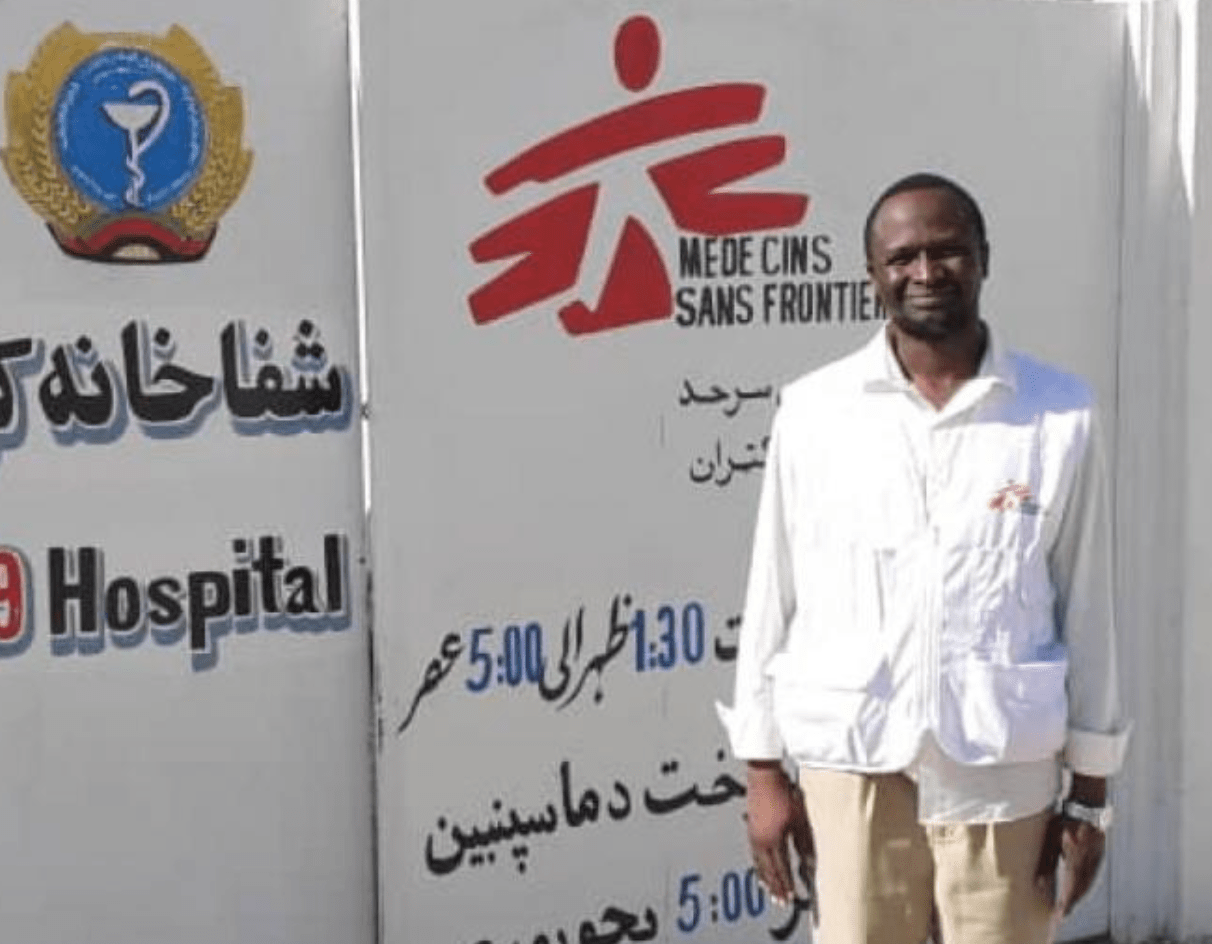 Navigating conflict and crisis in Afghanistan

We saw a rapid increase in measles cases in the first six weeks of the year, with 427 cases between January 1 and February 12. The infection rate is rising and our staff in Herat Regional Hospital are currently seeing around 45 new measles cases each day. In October, MSF set up containers to make extra beds available at its ITFC. We have turned one of the containers into a measles isolation ward and our team is working to establish additional isolation capacity in the hospital.

MSF’s COVID-19 treatment center in Herat treats people with severe symptoms and in January admitted 52 patients. In the final week of January, we triaged over 1,200 suspected COVID-19 cases at Herat regional hospital, an approximately 200 percent increase on preceding weeks. Despite seeing more suspected cases, the number of severe or critical cases remains low.

All departments in Boost hospital in Lashkar Gah, Helmand province, continue to be busy. The hospital has been operating beyond capacity since September and had a bed occupancy rate of 121 percent in January. In January, our maternity unit assisted 1,832 women to give birth. An average of 42 malnourished children were admitted to the ITFC each week, a slight decline from December, which saw 50 new admissions per week. We continue to see large numbers of patients in our ER—over 20,485 in January alone. We are also seeing a high number of measles cases: 607 patients were diagnosed with measles in January, the majority were children under five years of age. Most of the patients in the 35-bed isolation unit have measles and we have extra isolation capacity available if needed.

MSF continues to provide trauma care in its center in Kunduz. In January, our teams triaged 900 patients in the ER, 860 of whom had been injured in accidents and 40 had violence-related injuries. We admitted 103 patients for treatment, 26 of whom were admitted to ICU. Our team carried out 220 surgical procedures, mostly for wound debridement and dressings. Our team provided 990 consultations in the outpatient department, 360 were new patients and 660 came for follow-up care. We have also been vaccinating people against COVID-19.

Khost maternity hospital reverted to its original admission criteria on December 15, focusing on obstetrical complications. In January, our team assisted 1,914 deliveries. There were 165 admissions to our neonatal ward in January, a similar number to December. We have also been vaccinating people against COVID-19. 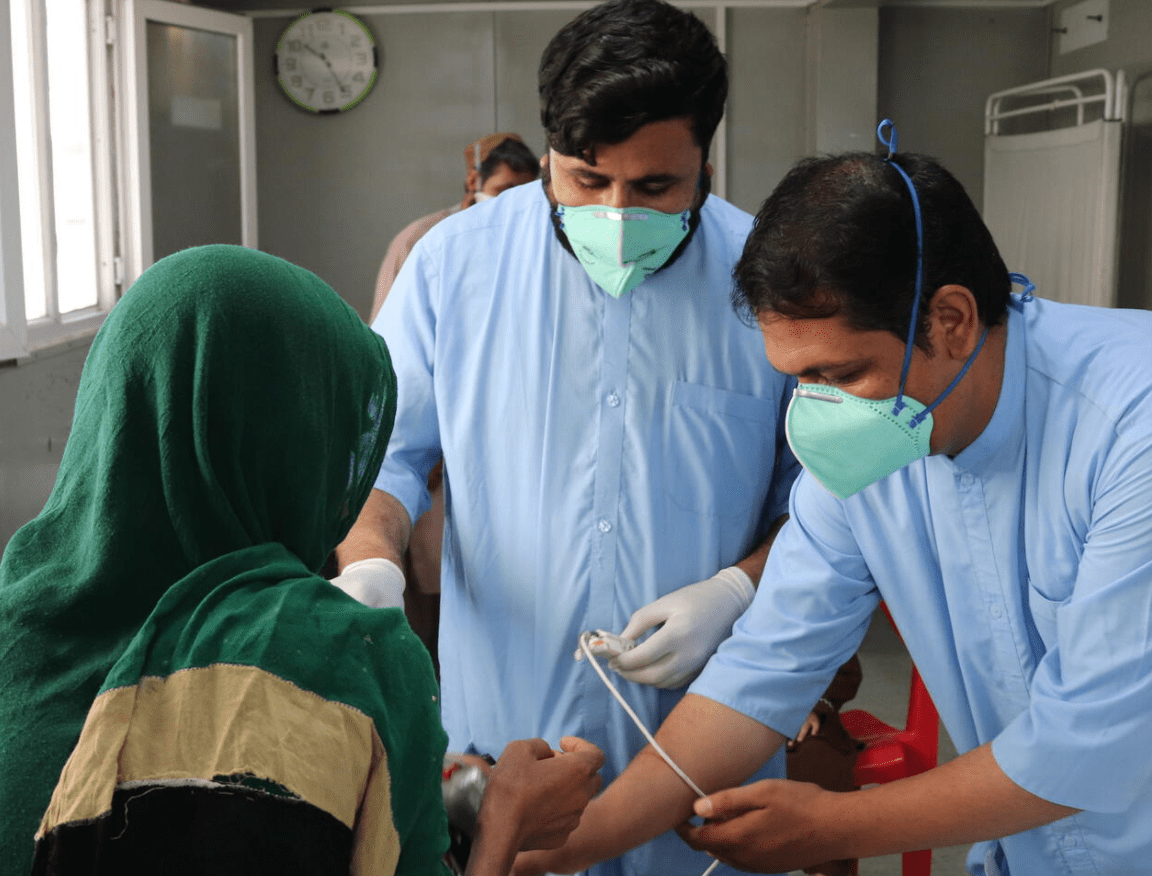 Drug-resistant tuberculosis in Afghanistan: We must continue to put people at the center of treatment

In Kandahar, we continue to run our drug-resistant tuberculosis (DR-TB) program, with 49 patients still enrolled at the end of January and four cured and discharged after completing their treatment. A total of 22 patients were cured and discharged in 2021. In September, MSF resumed screening patients for tuberculosis (TB) at Mirwais regional hospital, having put it on hold during the peak of the fighting in August 2021.

In December, MSF opened an outpatient therapeutic feeding center next door to its TB clinic to provide malnutrition care to children aged between six months to five years. Our team screens children at Mirwais regional hospital and enrolls those with severe acute malnutrition, while referring critical cases for inpatient treatment. By the end of January, we had screened 300 children and enrolled 51 patients in our program.