According to a new MSF survey, an alarmingly high number of children under the age of five are dying in parts of Central African Republic. 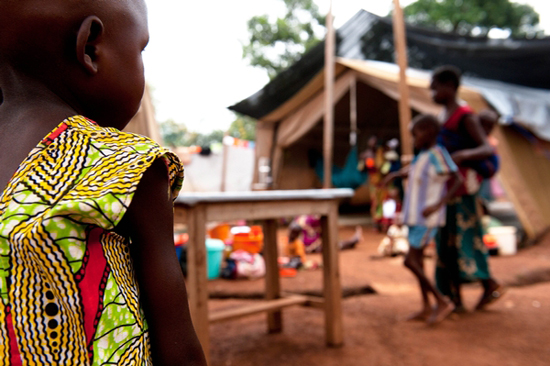 A young child at an MSF feeding center

An alarmingly high number of children under the age of five are dying in parts of Central African Republic, according to the findings of a new mortality survey conducted by Doctors Without Borders/Médecins Sans Frontières (MSF). This survey found that almost half of all reported deaths were young children, a staggering figure that can be attributed to the absence of easily accessible quality health care in the area. Only 26 percent of those children died in a health facility, while the remaining 74 percent died at home or en route to a hospital. These numbers are very close to emergency thresholds, which is particularly worrying given that Central African Republic is considered a relatively stable context.

“The results show the mortality rate in the overall population is high, and almost 50 percent of the deaths during the survey period were children,” says Till Kinkel, MSF’s health adviser for the Central African Republic. “This tells us that, on average, in this area, almost 200 out of every 1,000 children die before the age of five. We have health posts around our hospital but, clearly, they are not enough. We will have to adapt our strategy and go into the communities, because this is where the children are dying.”

An MSF team comprising an epidemiologist, a logistician, and 10 local interviewers conducted the survey over two weeks in April. The team interviewed 30 heads of households in 30 randomly selected villages in the northwest prefecture of Ouham, in and around the town of Boguila, where MSF manages a hospital. The team collected data on the number of people who had died in those households since the start of the previous cotton season in June 2011, and asked interviewees how the deaths occurred and where they had taken place. This data gives MSF a clearer picture of the health status of the population in the catchment area, and will help the organization determine its future medical activities.

“When a young child falls ill, the first thing parents try is treatment at home using traditional medicines and methods,” says Dr. Jatinder Singh, MSF’s deputy medical coordinator in Central African Republic. “If those treatments fail, the children are usually in a bad state by the time they reach hospital. We also see sick children arrive late because of the long distances they have to travel.”

The findings reveal that mortality rates for children under five and among the population as a whole were alarmingly high for a stable, post-emergency context, though they were slightly below the emergency threshold. Family members reported that the majority of deaths were caused by the three major illnesses prevalent in sub-Saharan Africa: malaria, respiratory infections, and diarrhea. More than two-thirds of deaths occurred in the rainy season.

Currently, MSF’s project in Boguila consists of a hospital providing secondary health care, an outpatient department, and 10 health posts in the surrounding area. With half of all patients coming to health facilities suffering from malaria, MSF has implemented a comprehensive malaria strategy. This includes distributing insecticide-treated mosquito nets, providing preventive therapy for pregnant women and infants, and running information campaigns with the help of outreach workers. Rapid diagnostic tests help diagnose the disease, and those testing positive are provided with immediate treatment.