"Since the project started in 2003, the quality of medical care offered to HIV patients in Guangxi Province has vastly improved,” said Gilles Isard, head of mission for Doctors Without Borders/Médecins Sans Frontières (MSF) in China. 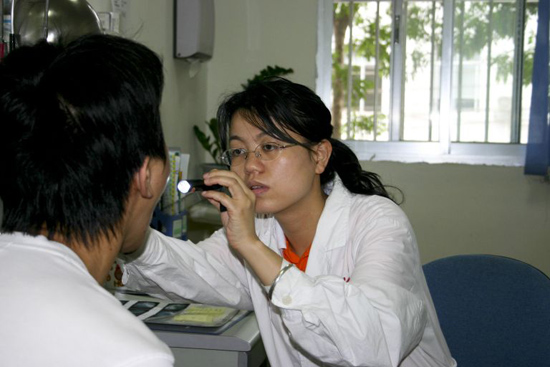 “Since the project started in 2003, the quality of medical care offered to HIV patients in Guangxi Province has vastly improved,” said Gilles Isard, head of mission for Doctors Without Borders/Médecins Sans Frontières (MSF) in China, “and this project is a good example of how such collaboration between China’s health authorities and an international medical organization like MSF can be beneficial for the Chinese people.”

After seven years of cooperation with the local Center for Disease Control (CDC), MSF has handed over an HIV project in Nanning City, Guangxi Province.

Although the HIV rate in China is relatively low, with an estimated 740,000 cases nationwide, there are pockets of communities where rates are comparatively high. The MSF/CDC project was designed to target high-risk, marginalized populations, including drug users, men who have sex with men, migrants, and female sex workers. 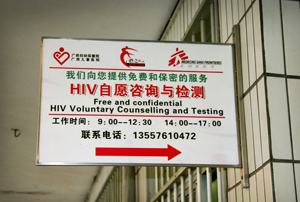 A sign directs people to the MSF/CDC-run HIV/AIDS clinic in Nanning. That project is being handed over to local health authorities.

Guangxi Province, in southwest China, has one of the highest rates of HIV infection in the country, and the project was able to demonstrate that people from high-risk populations can successfully be treated.

“In the early stages, we had no experience in providing treatment to drug users and AIDS patients overall,” said Dr. Zunyou Wu, director of the National Center for AIDS/STD Control and Prevention, Chinese CDC. “We just started in 2003 and we were very hesitant to launch antiretroviral therapy (ART) for drug users because we were not convinced they had good adherence rates, but we reviewed MSF data and found they did not have worse adherence rates than non-drug users. That convinced us.”

Soon after the project began, MSF expatriates were able to contribute to the framing of China’s national guidelines in tackling the disease, and throughout the seven years MSF was able to assist in the development of a holistic model of treatment and care for people living with HIV/AIDS in Guangxi.

When the project started, there were just a handful of voluntary counseling and testing (VCT) sites in the province, but now there are 45—one in each provincial county—and many elements of the model developed by MSF and partners are in place.

Today, ART is free in China, and access to services in Guangxi is much improved, both of which are some of the aspects that prompted MSF to decide to hand over its activities to local health partners.

A central element throughout the seven years of the project has been the training of Chinese clinicians, and MSF was able to bring a wide range of new treatment methods and approaches. Doctors from each of the 45 VCT sites now in Guangxi received training in the MSF/CDC clinic in Nanning.

“The project hasn’t just provided services to patients, it has also been the basis for training. It is not just Guangxi that benefits; it has provided guidance for the whole nation,” said Dr. Chien Jie, the director of the AIDS Department of Guangxi Province Public Health Bureau.

Another element the project brought to China is the importance of counseling, particularly peer counseling.

“In our previous medical practice, we never paid attention to counseling. When AIDS first started to emerge, there was incorrect propaganda. The media said that AIDS was a death sentence. Through counseling we can give patients correct information about how HIV/AIDS can be treated, as well as tell them how to prevent the spread of the disease,” said Dr. Shao Biao Huang, the director of the HIV Department of Hospital Number Four in Guangxi. Patients in the MSF/CDC clinic were hospitalized in Hospital Number Four.

For many patients, counseling was a significant part of the package of care offered by the MSF/CDC clinic.

“For me, the main achievement of this project has been the psychological support,” said a 28-year-old female patient. “When I arrived in the clinic I was very sick, and people gave me a lot of encouragement. Before, I didn’t have any knowledge about transmission, but now I know. At first, I didn’t understand the importance of taking antiretrovirals (ARVs) at the right time, but the doctors and counselors emphasized this, and my CD4 count improved. It’s good to talk with the counselors. Talking with them is the only way to relieve my burdens. Every time I talk with them I cry.”

However, despite the significant progress made in many areas of HIV/AIDS treatment since the project began seven years ago, some challenges remain.

“The government is doing what it can regarding stigma (towards people living with HIV/AIDS), but it goes really deep. You need more and more education campaigns,” said Sherry Dubois, MSF field coordinator.

Under current HIV/AIDS treatment protocols, ARVs are now free, but patients have to pay for hospitalization, as well as some tests. Treatment of some opportunistic infections also requires payment, and for some patients this economic burden is too high.

MSF plans to continue to run projects in China and is currently exploring new opportunities to work with Chinese health partners in Guangxi province.

Since the project began in late 2003, 1,724 patients have received care at the MSF/CDC clinic. Of the patients enrolled, around 80 percent were between 20 and 49 years old and around 32 percent were intravenous drug users. In the cohort of patients, 1,134 were started on antiretroviral therapy and around 84.1 percent of patients remain on ART today.

For more detailed information about the project, the model used and the lessons learned, please consult the “Joint Review of Guangxi CDC MSF-F project.”

MSF has been working in China since 1988 in a range of projects including disaster relief and improving access to primary healthcare in rural communities.