MSF has set up treatment centers in response to cholera outbreaks in Cameroon, Chad, Niger, and Nigeria. 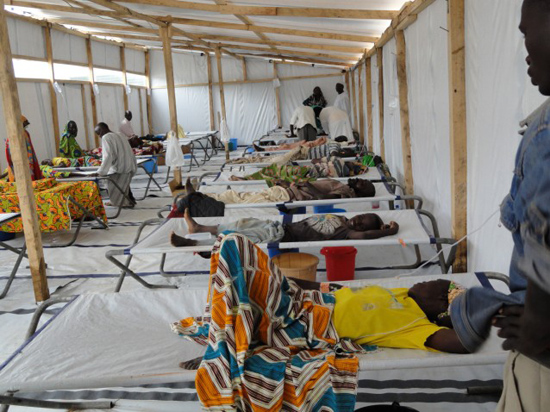 This summer, cholera outbreaks hit four neighboring countries in West Africa. Cholera is endemic in the region, but this wave brought with it far more cases than usual.

Cholera is a bacterial infection that causes severe watery diarrhea and vomiting. Though it can be fatal if it not addressed, treatment is relatively simple. The loss of fluids can be counteracted with a liquid rehydration therapy consisting of a salt-and-sugar solution or, in the worst cases, with intravenous infusions. The window for treatment is narrow, however. “Due to rapid dehydration, cholera can lead to death within hours,” explains Issiaka Abou, MSF’s head of mission for Chad. “It needs to be treated fast.”

What follows is a summary of MSF's activities in each intervention:

During this outbreak, cholera first appeared in Chad in late June and has now spread to 12 districts. By September, 1,836 cases had been reported, and 96 people had died—a mortality rate of 5.2 percent.

In mid-September MSF teams set up a CTC in Bol, a town in the Lac region, where 673 cases and 47 deaths were reported. Teams are now expanding the activities to Kaygaand and Tchokoutalia, towns from which most of the cases are emerging.

Additionally, MSF helped the Ministry of Health establish a CTC in Bokoro, where 130 cases and three deaths have been reported. MSF had set up a nutrition program in Bokoro this past May and is now providing the CTC with both technical as well as water and sanitation assistance. Another MSF team is supporting the Ministry of Health in Fianga, on the border with Cameroon, where a small outbreak has been confirmed.

Cameroon’s first cases were reported in early May, and the numbers started to increase in July. Through September 12, 6,119 cholera cases were registered in Cameroon’s Extrême Nord (Extreme North) region and 410 people have died.

MSF set up and manages CTUs in the towns of Marua and Mokolo. In Kolofata and Mogode, teams are supporting units already in place, providing hygiene management and case management. MSF is also supplying the programs with water and sanitation equipment and medical material.

“In Cameroon, we believe that the epidemic has peaked now but we have to be prudent about forecasts,” says Dr. Phil Humphris, an MSF program coordinator based in Geneva. MSF therefore continues to assess locations in the region.

Through September 17, 567 cases of cholera had been detected and 39 people had died in south Niger. In July, several small outbreaks hit regions on the borders of Chad and Nigeria, including Diffa, Zinder, and Maradi. An epidemic has not been officially declared in the country so far, however.

Overall, the cholera situation in Niger remains localized, unlike the malaria epidemics and the malnutrition crisis. Nearly 200,000 severely malnourished children and 1.2 million malaria cases have been reported in the country since January 2010. More than 85,000 children with severe malnutrition were admitted to medical facilities since the beginning of the year. Food supplements are being distributed to 143,000 others that remain vulnerable.

In Borno State, MSF is supporting the Ministry of Health’s 116-bed CTC in Maïdiguri, the district most heavily impacted by the epidemic. Teams have already treated more than 300 patients in the first week of activity, and 7 people have died. Data is still being collected and the situation monitored in other districts. ORPs are being established to treat the simplest cases.

In Bauchi State, MSF teams are treating patients in the 200-bed CTC inside the central hospital. Additionally, 31 ORPs have been set up and outreach activities (water chlorination, hygiene promotion, and education) are ongoing to prevent the spread of the disease. Since mid-July, more than 3,300 cases have been treated by MSF teams and Ministry of Health staff.

In northwestern Nigeria, specifically in Zamfara State, 8 of 14 local-government areas have reported more than 1,000 suspected cholera cases and more than 100 deaths. MSF mobile teams are supporting Ministry of Health clinics by providing supplies, training and infection control, and information, education, and communication programs. A CTU has also been constructed in the town of Anka, and MSF is employing additional staff to support the Ministry of Health’s response. MSF is also setting up two CTUs and ORPs in adjacent districts.