Gaza: Patients Are Still Deeply Affected A Year After the War

A year after the Israeli military's Operation Cast Lead was launched in the Gaza Strip, civilians are still deeply affected. Here are the stories of some of the patients Doctors Without Borders/Médecins Sans Frontières (MSF) has treated since the incursion. 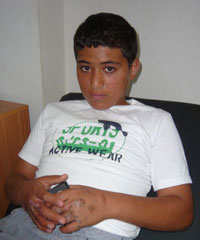 “We were in the car with my father and my mother, when I saw a fireball. I woke up in an Egyptian hospital after spending four days in a coma. My father was killed. I found out later that we had been hit by a missile fired by a drone.

I was wounded in both legs and my hands were broken. I spent 45 days in hospital in Egypt. I had to have several operations, have my dressings changed … It was very painful. My mother couldn’t come with me, so she phoned me every day.

After I got back to Gaza, I had another operation at the Nasser hospital. I had to have pins installed internally and externally, and debridements done. Then, on March 16, I was referred to MSF for dressings and physical therapy. The rehabilitation exercises are very painful. And I still have at least 3 or 4 months to go until they are done.

I had to have my mother wash and feed me. I can finally look after myself again, but what I really want is to go back to how I was before, to get my hands back.” 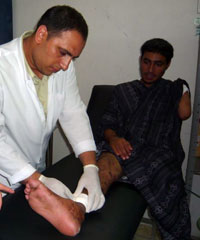 “It was January 3. I was riding my bike to the university. A plane fired on me — I don’t know why. I blacked out, and I was in a coma for 20 days. I woke up in a Saudi hospital, and then I saw that I had lost my left arm. I had open fractures in both legs, shrapnel in my face, hearing loss … and I was so tired …

I spent 5 months in Saudi Arabia, and then I was flown back via Cairo. I had to wait two days before I was allowed to cross the border at Rafah. A friend who is also getting treatment here advised me to get treated by MSF.

I had a difficult time getting used to this new body. Now, I can almost manage by myself, but it’s hard … I lost a year of university. I’m hoping to go back next year, but I have trouble writing. The artificial arm I have isn’t functional — it’s purely cosmetic.

Today, there are a lot of disabled people in the Gaza Strip. There are a lot of widows, orphans, and homeless people, too. The children are afraid. From my perspective, our future looks very difficult. But I was born here. I love Gaza. I want to make my life here: study, get married, start a family …” 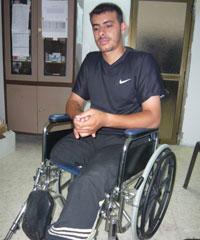 “I was a firefighter. On January 15, we were called to a neighborhood in Gaza City that had been bombed. A tank fired on the building where we were working. After the impact, I remained conscious. I saw that both my legs had been torn off; there was a lot of blood, but it didn’t hurt: I couldn’t feel anything. And I was thinking, “Thank you, God, I’m alive.” My whole team was injured. We all lost limbs.

I received 24 units of blood during my operation at the Shifa hospital. Then I was sent to Egypt by ambulance where I had two external pins put in place because both my arms were fractured. I was there for 50 days. I've been treated by the MSF mobile clinics for the last six months. Because I had suffered multiple injuries, I couldn’t move.

Since then, my life has got back to ‘normal’. I see my friends, but I will never be a firefighter again. If I can get prostheses, then I may be able to go back to work in the office rather than in the field. In Egypt, medical specialists took my measurements. A month ago, someone called to let me know that my legs were ready. I have applied to leave the Gaza Strip to go and pick them up. That was two months ago. I’m still waiting for an answer. Otherwise, I’m also on the waiting list for the only place in Gaza where prostheses are made.

I don’t feel angry. I’m resigned. Although I hope with all my heart that there will never be another war like the one in January, as far as I’m concerned, nothing has changed in the Gaza Strip. The situation is just as difficult as it was before. Still, I’m not going to leave. This is my home. I will stay in Gaza.” 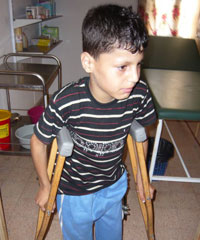 “I was on the street with my mother, my 11-month-old brother, my aunt and my cousin. A tank shot at us. My mother, my brother and my cousin died. My aunt and I were injured. The ambulance came to get us. I was in so much pain. We were taken to Shifa hospital. My aunt had both her legs amputated. I was in the hospital for 25 days: I had a pin installed, shrapnel removed and a skin graft to repair damaged tissue.

I’ve been coming here for six months to have my dressings changed and get physical therapy. I’m also on MSF’s waiting list for a bone graft; that will be in a month.

I am angry and sad… I cry all the time. I miss my mother. A lot of my friends are the same now. I can only play on the computer.”

His father adds, “ I am angry, I think about my wife all the time, I miss her. My son has withdrawn into his own silent world.” 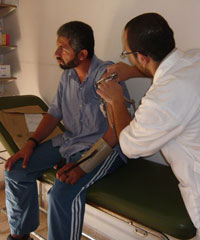 “On the first day of the war, all the police stations were bombed. I was near one of them. An Apache helicopter had fired; there were four of us, and we were all seriously injured. My arm was wounded and I got shrapnel in my chest. A car took me to the Shifa hospital, and I was there for two days before being transferred to Egypt. I stayed 53 days. I had to pay for part of my medication and equipment there ...

I’ve been getting free treatment from MSF for four months. I feel as if I am getting better and better. But I’m still in a lot of pain and I’m not sleeping well. In winter the metal pins get cold, and it’s painful.

Life is hard enough to begin with, but it’s even worse when you are injured and disabled. I can’t work anymore, and we’re trapped inside the closed borders. If I ever have the chance to leave, I will definitely take it! There’s no future here, for the children or for anyone.” 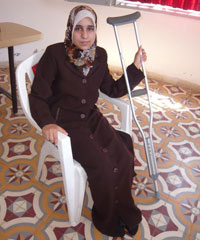 “It was the ninth day. We lived in Jabalya, near the UNRWA (United Nations Relief and Works Agency for Palestine Refugees in the Near East) school that was bombed. I will never forget that day.

We had taken refuge in the stairwell, and a shell landed on us. My husband was lying beside me, covered in blood. I shook him, but he was dead. We had been married for four months … My legs were bleeding and I screamed for an hour before the ambulance could come and get me. The hospital was overwhelmed, there were wounded people everywhere, and dead bodies too. I took the bed of a man who had died. I have a lot of dreams about that experience. I wake up covered in sweat, terrified.

After one week, I was transferred to Turkey by plane via Egypt. I had a lot of trouble crossing the Egyptian border. There were tanks and bombing. It took the ambulance three hours to get through. When I came back to Gaza, I was in a wheelchair. The MSF mobile team came to my home to care for me. After a month I was able to walk to the clinic.

My brother-in-law applied to go to France to get a prosthetic leg. He’s been waiting three months for an answer. You have to be very organized to live here. Day-to-day life is difficult, especially for a woman, and especially if she’s injured … I use the internet as an escape. I am going to go back to my law studies. I will never remarry. I would like to get away from here. In Gaza, you cry every day, there’s no future.” 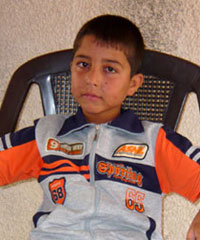 “I had an accident with a mine. It was January 26, after the war. I was playing behind my house when I found this metal ball. I picked it up and it exploded. At first, I didn’t understand. I saw all this blood running down my hands and face. It really hurt. I was scared. My little brother was also injured.

My parents took me to the hospital. I had shrapnel everywhere: in my chest, face, both arms, and my stomach. I was in hospital for two weeks. I was referred to MSF to have surgery under the tents. That’s when the shrapnel was removed, on March 31. When I woke up, I didn’t feel well at all, I had a very bad headache. It took me several days to recover. Today I come to the clinic to do my physical therapy. I feel that I’m doing much better. My condition is improving. I’m not in pain any more.

Two children who lived near me had the same kind of accident, after the war. But they are dead ... My grandparents were also killed during the war. My neighbors, too. We stayed holed up inside the house. The bombing was so close! I was scared. But today, I can’t remember any of it. I’ve forgotten everything. " 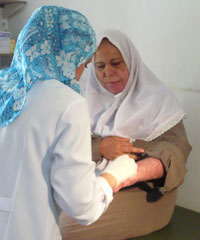 “There was no electricity during the war, so we used kerosene lamps. There was shelling very close to my home. Shrapnel hit the lamp and it fell on me. Both my hands, my face, and my chest were burned. An ambulance took me to the Shifa hospital.

I stayed over a month at the burn center. As long as the war continued, I was afraid for my children. I kept hearing the shooting, the shelling, all the sirens. New patients were arriving constantly; there weren’t enough beds and a lot of people were dying… I had three operations, including a skin graft. Then I received care from MSF. I had three operations under the tent (wound debridement, skin graft, and contracture). I’m beginning to get better. I wouldn’t have been able to pay for all this care and medication at a private clinic.

Life is too difficult here. There’s no work. My husband and son are unemployed. We’re trapped, and there’s nothing here, not even electricity ... I am disabled, and I have difficulty doing my housework properly. I just want life to go back to normal, the way it was before.”