Mali: Refugees in a Vulnerable Situation 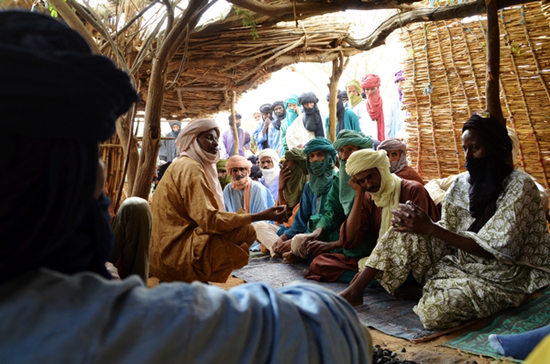 Malian refugees in a makeshift shelter in Burkina Faso 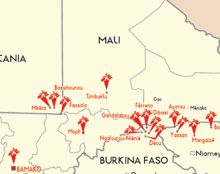 A political crisis has divided Mali since the end of January. People displaced by conflict are leaving the north of the country; hiding in the bush or fleeing en masse to Burkina Faso, Niger, and Mauritania. Often they settle in places where people are already living—places that have already been weakened by food insecurity in the region. Doctors Without Borders/Médecins Sans Frontières (MSF) is responding to the growing humanitarian need in the region, providing assistance to refugees as well as to local people.

Ongoing conflict and a food crisis have driven more than 300,000 Malians to flee the country for neighboring nations. “Many are terrified and ready to leave everything behind to escape violence,” says Marie-Christine Férir, MSF emergency coordinator.

The refugees, who are coming mostly from Timbuktu, Gao, Ségou, and Mopti, are taking refuge in communities and camps where there is only very limited assistance in terms of water, shelter, and food.

MSF is responding to the needs of vulnerable people by supporting health centers in Burkina Faso (Gandafabou, Férrerio), Mauritania (Fassala, Mbéra, Bassikounou), and Niger (Chinagodar, Bani Bangou, Yassan). Every week, MSF’s mobile clinics treat people in refugee camps in Burkina Faso (Dibissi, Ngatoutou-Niénié, Déou) and Niger (Ayorou, Maigaïzé, Bani Bangou, Abala, Gaoudel, and Nbeidou). Since February, MSF medical teams have carried out more than 23,000 consultations in the border regions of Mali. “We are mainly seeing respiratory infections, malaria, and diarrhea,” says Férir. “These problems are often due to the very bad conditions that the refugees are living in.” MSF teams are also treating a large number of women in need of obstetric care. One hundred women have given birth in the MSF health post in Mbera camp in Mauritania.

Water, a Rare and Precious Commodity

Refugees do not have adequate access to safe water, especially in the desert areas of Mauritania. Potable water is essential to avoid diseases and other hygiene-related health problems. In Niger’s Bani Bangou camp, MSF trucks are servicing some reservoirs of water, producing 200 cubic meters (about 53,000 gallons) of chlorinated water each week. “With temperatures around 50 degrees, [about 122 degrees Fahrenheit] we have to make sure that the refugees and especially the young children and the elderly get enough to drink,” says Férir. The fact that the region already suffers from drought and food insecurity makes migration of this scale particularly alarming.

The refugees are totally dependent on humanitarian aid for essential services like the distribution of food supplies, but the food they receive is often inadequate. Mothers receive neither milk nor appropriate food to feed their children. "The rice [distributed by many humanitarian aid groups] can relieve hunger but can not replace the nutrients children need,” says Férir. “The distribution of elements such as proteins, fats, vitamins, carbohydrates, and minerals are essential for growth and development of the child.” In Mauritania, refugees have told MSF that they had fled Mali because of lack of food. Since the beginning of the emergency response, MSF has treated almost 1,000 severely malnourished children in those three countries.

Protecting children from measles is another health priority in the camps where MSF is working. In these places, where people live in disorder and children suffer from chronic malnutrition, a measles epidemic would be devastating. MSF has vaccinated more than 10,000 children since March with the support of health authorities. Cholera cases have been documented in Namarigoungou and Bonfeba, in Niger. MSF and the Nigerien Ministry of Health have treated some 600 cholera patients since the beginning of May. Another MSF team is completing construction of two new 60-bed cholera treatment centers.

The vulnerability of the refugees and the coming rainy season will increase the risk of epidemics like malaria and cholera. What’s more, the “hunger gap” that begins in the month of July always corresponds with a peak in malnutrition. In the coming months, vulnerable people across Mali and the surrounding regions will face the double burden of malnutrition and malaria.

In the Sikasso region of Mali, MSF teams are also running pediatric and nutrition activities in five health centers and the Koutiala hospital. In addition to curative activities, MSF is working on prevention of major childhood diseases. In the north, MSF is working in Timbuktu hospital and provides care in villages in the Timbuktu, Kidal, and Mopti regions.