Mozambique: A Long Fight Against HIV/AIDS But an Uncertain Outcome

Despite some encouraging trends among people living with HIV in Mozambique, a great deal of work remains to be done. 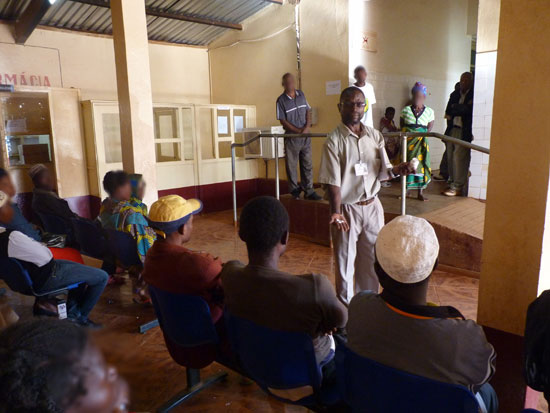 Around 50 people crowd into the waiting room in the northern town of Lichinga’s hospital, listening intently to Jaime Fernando Aime’s impassioned speech. His voice deep, his posture proud, he tells everyone that he is HIV-positive and has been receiving antiretroviral treatment for four years. He pulls a box of pills from his pocket. “Look, there’s nothing to it,” he says. “It’s just medicine, and it means I can live and work normally. I even cycled here today!”

For three years Aime has been employed by MSF in Mozambique to spread the word and convince Lichinga’s inhabitants to get tested for HIV/AIDS. “The difficult first step is breaking the silence and daring to tell others that you are HIV-positive,” he explains. “Things are easier now. There is less shame surrounding the issue. The people I address feel more able to ask questions.”

Thanks to the work carried out by Aime and dozens of other activists, HIV/AIDS is no longer the taboo it once was in Mozambique. There remains much to be done, but one indication of the progress that’s been made is the substantial increase in the number of patients in the care of MSF-supported health structures. In Chamanculo, a district in the capital city of Maputo, more than 18,000 people were receiving antiretroviral (ARV) treatment at the end of 2010, an increase of 58 percent from the previous year. “These figures do not signal a new peak in the epidemic, but rather an increase in awareness among the population,” explains Gaël Claquin, coordinator of the MSF project in Chamanculo. “More and more people are coming forward to get tested, which increases the number of patients.”

MSF has been working with patients living with HIV in Mozambique since 2001, helping the Ministry of health develop a comprehensive plan for widespread provision of ARV treatment. By the end of 2010, more than 33,000 patients were being treated with ARVs with the assistance of MSF. The organization currently runs two HIV programs in Maputo and has HIV projects in three provincial areas: Lichinga, Angonia, and Tete.

Nonetheless, the larger figures show there is still cause for great concern. The rate of HIV/AIDS among adults aged 15 to 49 in Mozambique currently stands at 11.5 percent. In urban areas, this rate is as high as 15.9 percent. And an estimated 18 percent of pregnant women are infected with the virus. Overall, some 1.4 million Mozambicans are HIV-positive, and less than half of the 650,000 who need ARV treatment have access to it.

Hope for a Long Life

Early one morning, a bustling crowd stands in front of the reception desk of Chamanculo Hospital. A quarter of them—and around 200 to 250 people every day—have come for a consultation relating to a chronic illness, usually HIV/AIDS. For many, it is their first visit following a positive HIV/AIDS test, time for their initial meeting with an MSF consultant.

Nearby, in a small, poorly-lit room, two female MSF consultants talk to six patients sitting on wooden benches. A man wearing a yellow hat asks if he has to come back every month to collect his medicine. He works in South Africa and doesn’t want to lose his job. Margarita, an MSF “expert patient”, who is herself HIV-positive, confirms that he can get the same drugs in South Africa and continue his treatment uninterrupted.

“This first discussion is very important as it allows people access to answers about what their lives will be like, meaning the medical staff that see them later on can concentrate on the consultation,” explains Amélia, a nurse who has worked for MSF since 2002. “A few years ago the patients would cry a lot at the first consultations. These days they are more philosophical when they find out they are HIV-positive. They know they can be treated and that they can live a long and healthy life if they follow their treatment, especially if they have been screened early.”

Training Nurses to Take Over from Doctors

MSF has been trying for several years to convince the Mozambican authorities that it’s necessary to invest more in human resources and to adapt protocols to allow more patients to receive care. “For example, we are proposing that nurses, having undergone sufficient training, could prescribe antiretroviral treatments for uncomplicated cases, which can currently only be done by doctors and técnicos de medicina,” or assistant doctors, says Mariano Lugli, MSF’s team leader in Mozambique.

In anticipation of this happening, MSF has set up a training program for nurses that will allow them to begin the work quickly. “We are well prepared and will be able to start providing treatment as soon as the law changes,” explains Alberto Zefarias, an MSF nurse in Chamanculo hospital. “Some of us are now even helping less experienced técnicos de medicina. But we are already inundated with work. On some days I see up to 60 patients who have come to the hospital to renew their treatment.”

The fact that hundreds of thousands of patients do not yet have access to the treatment they need to survive is also connected to a lack of financing. HIV/AIDS care accounts for almost half of the Ministry of Health’s budget ($78 million from a total of $138.7 million). MSF teams observe frequent shortages in the supply of drugs due to technical reasons or a lack of funds. “International funding, from the Global Fund in particular, is becoming more and more limited, be it for Mozambique or for other countries affected by HIV/AIDS and tuberculosis epidemics, which are often linked,” explains Lugli. “Sadly, despite its noteworthy efforts, Mozambique cannot make it without further commitment from international backers.”