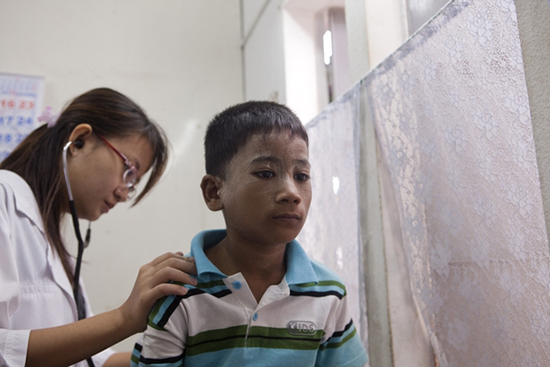 An HIV-positive child receives treatment at an MSF TB/HIV clinic.

New WHO recommendations include earlier antiretroviral therapy (ART) for people living with HIV, improved protocols to prevent HIV from being transmitted from mother to child, and regular and more effective monitoring of the amount of virus in people’s blood—known as ‘viral load’—to ensure treatment is working.

“Early HIV treatment makes a major difference—it keeps people healthier and also helps prevent the virus from spreading within communities, but we need the political and financial support to see these recommendations rolled out rapidly,” said Dr. Unni Karunakara, International President of MSF.

Use of ‘viral load’ monitoring to ensure antiretroviral medicines are keeping the virus suppressed is a critical advance in the recommendations. Viral load works best when patients receive support to remain adherent to their medicines, and shows multiple benefits for patients and treatment providers alike.

“There’s no greater motivating factor for people to stick to their HIV treatment than knowing the virus is ‘undetectable’ in their blood,” said Dr. Gilles van Cutsem, MSF’s medical coordinator in South Africa. “Viral load testing is the optimal way of maintaining people on first-line treatment and knowing when to switch them to second-line drugs, so it’s high time it’s made available in countries with a heavy burden of disease. With these new guidelines our collective goal should now be to scale up without messing up: to reach more people, retain them on treatment, and with an undetectable viral load.”

With the new WHO guidelines, the number of people now eligible for treatment will rise substantially.

“These new treatment recommendations are ambitious, and needed; they’re also feasible,” said Dr. Karunakara. “Now is not the time to be daunted, but to push forward with what we know works to get the best treatment possible to the most people, as soon as possible. Countries should implement these new WHO guidelines and accelerate treatment without delay, so it’s critical to mobilize international support to enable them to do so, including funding for HIV treatment programs from donor governments and the Global Fund."

Donor agencies such as the Global Fund to Fight AIDS, TB, and Malaria and the US government’s PEPFAR program must support the swift implementation of the new guidelines as a strategic priority. The Global Fund is holding its three-year replenishment conference later this year, where donor commitments should reflect the increased treatment targets.

MSF’s experience treating HIV in developing countries since 2000 has shown that, through adapted treatment delivery strategies—combined with supportive policies—scale-up of quality care to large numbers of people is feasible. Drugs must be easy to take and affordable; treatment monitoring is essential and must be coupled with effective counseling for people with problems adhering to treatment; and patients must be empowered and encouraged to take on a larger role in the management of their care. For example, one strategy MSF piloted in Mozambique in order to simplify care and help people stick to their treatment has been to form small patient groups, with a different group member going for a check-up each month and getting a medicine refill for the whole group. This model not only simplifies care for people but also frees up health staff time to focus on more critical cases.

But through its work, MSF is also confronted with many of the people who continue to be locked out of treatment, and special attention must be paid to ensuring these countries are not left behind.

“In places like the Central African Republic, the Democratic Republic of Congo, Guinea and Myanmar, it’s like the clock stopped over ten years ago, with shamefully high numbers of people dying because they cannot obtain treatment,” said Dr. van Cutsem “There’s also a need to increase coverage of vulnerable populations like the rural poor in high prevalence countries. The international community must not allow the neglect of people in need of HIV treatment to continue in contexts of instability, where systems are weak or where the political will is lacking.”