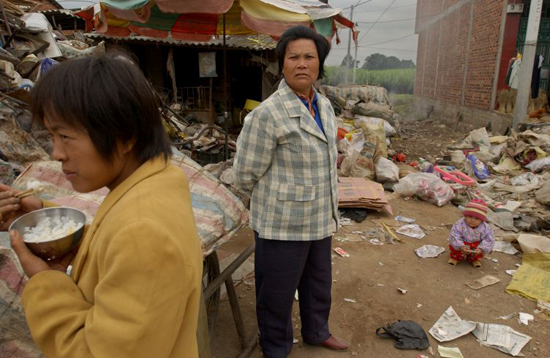 A family collects rubbish in Nanning.

The World Health Organization’s (WHO) 2008 Global Tuberculosis Control report shows that tuberculosis (TB) continues to be a major cause of illness and death worldwide and that the death toll from TB is rising. China carries roughly one quarter of the world's TB burden and ranks second on the list of the top five TB-endemic countries, which are: India, China, Indonesia, South Africa, and Nigeria.

In 2006, China had 4.5 million cases of TB, with the annual number of new cases estimated to be 1.3 million, according to the WHO report on global TB control. As elsewhere, TB hits the poor hardest in China, particularly the millions of migrants who move from rural to urban areas where their access to health care is limited.

In view of the seriousness of the problem, the Chinese government started a national TB program in 1991 together with the WHO. Since the introduction of the program, the detection of TB cases in China has improved, and free treatment is available in specialized TB centers. However, despite the government’s efforts, the challenges remain numerous.

Challenges of poor detection rates and the rise of drug-resistance

Globally, the WHO has estimated that for every five cases of the disease that are detected, four other cases go undetected. This lack of case detection is a major concern for TB control in China, and has lead to a continued spread of the epidemic. And the spread of multidrug-resistant TB (MDR–TB) in China is of even bigger concern.

"TB is a curable disease. In fact, curing TB is not extremely difficult,” says Dr. Cornelia Hennig, a WHO medical officer. “However, the treatment usually lasts for six months, and therefore, good adherence is essential. If patients do not adhere to their treatment, or are being prescribed substandard drugs, it is possible to create drug-resistance during their first line treatment.”

Poverty is driving the epidemic

Poor detection rates and poor adherence to treatment means that the disease is spreading in China. Poverty is the underlying reason for this? for instance, although TB drugs are free in government programs, China’s poor cannot pay for the multiple tests and X-rays required to diagnose the disease.

Poverty also leads to poor adherence to first-line regimes because TB treatment centers are often far away from the places where people live and work and they cannot travel to get their treatment easily, if at all. And if people are on the move, migrating from one area to another, this too presents obstacles to treatment-adherence and is more likely to lead to the creation of drug-resistance

Further challenges include the lack of modern diagnostic tools for TB. Diagnosis of TB with the current medical tools is particularly difficult in people infected with HIV. In MSF's HIV/AIDS project in Nanning, 10 percent of the HIV-infected patients developed active TB per year. Yet of these infections, only 23.5 percent were easily diagnosed with the most commonly used TB diagnostic test—sputum smear microscopy—which is often ineffective. Another 45 percent were diagnosed after a significant delay because their sputum tests came back negative.

More worrying now, however, is the trend of strains of drug-resistant TB to infect patients who have not previously been exposed to TB drugs at all. At least half of the MDR-TB patients in China have never taken any TB drugs before. The situation is getting worse because referrals from the general health centers to the TB centers are not taking place, partly due to a lack of awareness among patients and health staff.

MSF and TB in China

China’s growing TB pandemic and the lack of access to affordable treatment for MDR-TB have motivated MSF to move ahead with plans to expand its programs in collaboration with the provincial and central authorities to treat TB.

In the northern China provinces of Inner Mongolia Autonomous Region and Jilin, the situation is more severe, according to government statistics. MSF has been involved in in-depth negotiations to establish an MDR-TB prevention and management program for these areas.

“The goal of MSF is to set up a sustainable model for prevention and management of MDR-TB in collaboration with the TB authorities in China," says Dr. Philip Tavernier, an MSF head of mission in China.

To curb the TB epidemic in China, improved adherence, improvements in the health system, better diagnostic tools, and access to second-line anti-TB drugs are urgently needed.