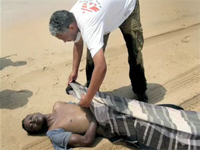 Perilous Journey: Human Smuggling in the Gulf of Aden

April, 23, 2009, Awhar, Yemen—A Doctors Without Borders/Médecins Sans Frontières (MSF) mobile team found 35 Somalis and Ethiopians dead on the Yemen coast on the night of April 22. The dead were among a group who had departed two days prior from the port of Bosasso, Somalia, fleeing insecurity or extreme poverty on a smuggler’s boat. They were travelling in extremely harsh conditions across the Gulf of Aden to reach Yemen.

Survivors who arrived on the coast in Abyan province told the MSF team that, for reasons that remain unclear, the boat capsized as it began to approach the shore during the night. Many refugees were travelling in the dark, airless hull of the boat, which was designed to store fish.

When the MSF team arrived at the scene, they found the capsized boat, and with the help of local people, they managed to free three women from the hull. Unfortunately the others trapped in the hull had drowned; still more had drowned when the vessel capsized.

The death toll from this landing is 35 people so far, but others may be missing.

Survivors told MSF that during their journey, they had been stopped by armed Somali pirates who threatened to rob them and throw them into the sea, but they managed to escape after the smugglers negotiated with the pirates.

On April 10, an estimated 76 people were forced to jump into deep waters off the coast of Yemen by the smugglers who were transporting them. The following day, 16 bodies washed ashore at Melha, about 18 miles from Ahwar town, where the UNHCR has a reception center for such refugees and where MSF provides medical and mental health care for them. Many passengers are still missing; MSF assisted 48 survivors.

Such stories are common in this area. Somalis and Ethiopians fleeing war or extreme poverty say they have no choice but to risk everything by taking this dangerous journey. People travel for two days in 26- to 32-foot boats transporting 100 to 120 passengers. During the journey they are usually not given any food or water and are not allowed to move. People are put in the hulls of the boats and sometimes suffocate to death. The death toll from these journeys is high: since September 2008 at least 338 people have been found dead on the coast of Abyan province, not including the unknown number of dead buried by fishermen or fellow refugees.

MSF has been working in Ahwar since September 2007. Since then, MSF has provided emergency medical and psychosocial care, water, food, and relief items to more than 17,600 survivors of human smuggling there. In June 2008, MSF released a report, titled “No Choice,” which documents the conditions of the perilous journey to Yemen and calls for increased assistance for the thousands of refugees, asylum seekers, and migrants fleeing their home countries.