MSF Treats Women with Fistulas And Works to Prevent Them

Obstetric fistulas are one of the most serious consequences of obstructed labor. An estimated 2 million women in developing countries are living with fistulas, many on the margins of society. 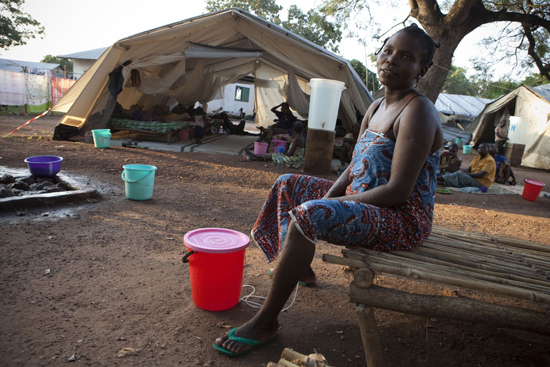 Robertine, 32, suffered a fistula when she was in labor for 24 hours. She received fistula repair surgery at an MSF fistula camp in Boguila, Central African Republic (CAR).

"The sun should not rise or set twice on a woman in labor."

Despite this proverb, labor can often last many days in Africa, where a majority of women give birth at home. When a woman with obstructed labor is finally brought to the hospital, it is often not only too late for the newborn, but also sometimes for the mother.

If she survives, a woman is likely to emerge bearing the effects of her ordeal. Obstetric fistulas are one of the most serious consequences of obstructed labor; it occurs when the soft tissue in the pelvis is compressed by the baby’s head. The lack of blood flow causes the tissue to die, creating a hole between the vagina and bladder, the vagina and rectum, or both. The result is urinary and/or fecal incontinence. Women with fistulas live in shame and are often rejected by their own families and communities.

Worldwide, an estimated two million women have fistulas—most of them in Africa. This problem is largely hidden because it often affects young women who live in poor, remote areas with very limited or no access to maternal health care.

Zanaba, 16, is a patient who received treatment for her fistula last year in Central African Republic (CAR). After three days of intensely painful labor, her mother went looking for a traditional birth attendant. After seven days of labor, Zanaba was brought to the nearest hospital—a day-long motorcycle ride away. When she arrived, she underwent a Cesarean section, but the baby had already died. The young woman was saved, but the prolonged, obstructed labor caused a fistula, which required a second surgery. “I did not know that fistulas exist and how they can occur. But I am glad that I received the operation,” she said.

A Chance at a New Beginning: Fistula Camp in CAR

Fistulas are largely preventable and have all but disappeared in developed countries where there is universal access to obstetric care.

The operation to close a fistula is long and delicate and requires highly specialized surgical skills. These are taught at only a few institutions in Africa. In Chad, MSF works with Chadian surgeon Dr. Valentin Valandi. Dr. Valandi received his medical training in Dakar, Senegal, and now specializes in fistula repair, thanks to visits and training by international experts. "Each case is different; I learn every day,” he said. “In Chad, too many women have already been operated on inappropriately, which further complicates the procedure.”

But total treatment goes beyond the surgical aspect. Because of the flow of urine and feces, affected women can develop multiple infections or skin diseases. They may also have difficulty  walking and, because of their exclusion from society, they are likely to suffer from malnutrition. After surgery, in case of residual incontinence, patients often require physiotherapeutic rehabilitation. Psychosocial care is also needed in order to help reintegrate the women into their communities.

MSF doctors in most of the places where the organization works have encountered numerous women suffering from fistulas. In 2003, MSF organized its first fistula camps in Ivory Coast and Chad. In subsequent years, interventions were held in Sierra Leone, Somalia, Democratic Republic of Congo (DRC), CAR and Mali. They continue today in DRC and CAR.

“MSF usually works in insecure or war-torn countries. That is why we chose to set up short projects," said  Michiel Lekkerkerker, medical advisor for MSF in Amsterdam. "Fistula camps, as we call them, are installed for two months next to existing hospitals. Before we set up the camp, the population is informed so that women with fistulas come for a consultation. Then we hire additional employees and we prepare between 40 and 80 beds, usually in tents. The surgeon stays about one month on site and operates on several women a day. This method has the advantage of flexibility, and it is easier to find a specialized surgeon for a short period. "

The latest facility to open its doors is the Urumuri center, backed by the regional hospital in Gitega, in the heart of Burundi. In July 2010, it became the first center in Burundi to specialize in treating fistulas. Women can receive treatment seven days a week, and MSF has built four houses to accommodate patients before surgery and afterwards, during rehabilitation. At MSF's permanent treatment centers, women receive six months of outpatient follow-up care to ensure the fistula has healed and that continence is maintained.

"This kind of project ensures better monitoring of patients, and it is possible to do research to improve treatment," said Geert Morren, surgeon and fistula specialist at MSF in Brussels. Dr. Morren has operated on many of the fistula patients in Gitega. "The objective is to operate on 350 women per year for three years. This time frame should allow us to train three Burundi surgeons, and to transfer our activities to the Ministry of Health." 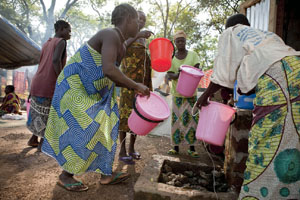 Women at MSF's fistula camp in Boguila, CAR, rinse out the buckets that hold their urine.

In Burundi, in addition to the specialized center in Gitega, MSF built a maternity unit Kabezi Province, near the capital, Bujumbura. The plan in Burundi, Chad, and Nigeria is to prevent the occurrence of fistulas by improving the obstetric care available.

In Abeche, eastern Chad, MSF began Project Butterfly in 2008. The butterfly symbolizes the transformation of a woman who has had to live a reclusive life but who now has the chance at a fresh start after her operation. In 2009, MSF built a “women’s village” to accommodate patients with fistula during their weeks-long stay. During the first consultations, health staff screen patients for malnutrition, which must be taken care of before the surgical intervention. After the surgery, counseling and rehabilitation sessions are designed to allow the women to return to society. In Abeche, MSF also supports the regional maternity hospital, next to its “butterfly” center.

In Nigeria, MSF works with Ministry of Health staff at a hospital in Jahun, in the north of the country, providing obstetric and neonatal care to the local population. In 2010, the MSF team carried out 400 fistula repair surgeries.

In 2010, MSF teams have operated and treated about 1000 women suffering from obstetric fistula. On March 8 and 9, MSF is holding a workshop in Geneva to improve the management of fistulas. The meeting coincides with International Women's Day and will bring together actors involved in fistula treatment—surgeons and experts working for MSF and for other organizations.