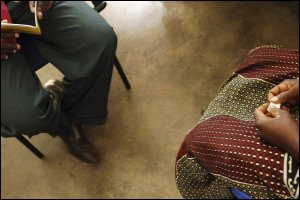 An MSF clinical officer asks a pregnant woman if she had been tested for HIV at the Thyolo District Hospital in Malawi. Photo © Julie Remy

Globally, an estimated 2.3 million children are living with HIV, the vast majority in sub-Saharan Africa. Nine out of ten newly infected children acquire the virus through mother-to-child transmission, largely because efforts to prevent this are insufficient. Far too few children receive treatment — only 5% of the 660,000 in urgent need — and there are no appropriate tests for diagnosing infants and very few adapted tools to treat children. MSF stated that international organizations have been late to respond to the needs of an increasing number of children living with HIV/AIDS and warned that scaling-up treatment of children will be impossible without immediate action.

MSF presented clinical data in Toronto on outcomes of treating children in resource-poor settings. Data released on 3,754 children under 13 in MSF treatment programs in 14 countries showed that children can be treated effectively: 80% were alive and continuing therapy after 24 months on treatment, with few adverse side effects. Significant gains in CD4 count and weight were observed. In the absence of suitable pediatric medicine formulations, most children were treated with broken adult tablets.

"We know that treating children works, but with better tools we could be treating so many more," said Dr. Moses Masaquoi of MSF in Malawi. "And we see the number of children born with HIV constantly growing in Africa, because expecting mothers don't have access to antenatal care and children born to HIV positive mothers are largely lost to follow-up." This partly explains the worrying fact that infants under a year represented only 2% of children on ART in MSF projects. Without treatment, half of children who acquire HIV through mother-to-child transmission die before the age of two.

Diagnosing and treating children remains a major challenge. Diagnosis is difficult in resource-poor settings because antibody-detection tests commonly used in adults are not accurate for that age group. Treatment is difficult because there are very few appropriate pediatric dosages of antiretroviral drugs, forcing caregivers to split adult tablets that are not designed for partial intake — an option that is far from ideal. For children weighing less than 10 kilograms, even this strategy is impossible, as the only treatment options are syrups that are difficult to measure, bitter tasting, often need refrigeration, and are overpriced. Because the vast majority of infected children live in poor countries, most pharmaceutical companies are hardly investing in developing pediatric formulations.

MSF data presented on pricing showed that pharmaceutical companies are charging excessively marked up prices in resource-poor countries for pediatric formulations of ARVs. These prices are not justified by the amount of active pharmaceutical ingredient (API). API is the main driver of the cost of drug production and therefore of the final price — it typically accounts for more than half of what it costs to produce a drug.

As an example, the dose of zidovudine required to treat an adult costs US$175 per year. The amount of API in the adult dose is more than three times that contained in a dose of zidovidune syrup for treating a child under 10 kilograms. Logically, the syrup should cost US$40. However, the drug is marketed for US$215, over 5 times more than that.

WHO and UNICEF need to issue a strong call for urgently needed formulations to serve as clear guidance to manufacturers. Because such guidance was lacking, two companies have started producing a long-awaited fixed-dose-combination, but in different dosages.

"Lack of guidance from WHO is making the treatment of children even more confusing, and some clear indications three years ago could have really helped avoid this," said Fernando Pascual, pharmacist with MSF's Campaign for Access to Essential Medicines.