Nigeria: Lead Poisoning Continues to Affect Hundreds of Children in the Northwest

MSF has treated 400 children for lead poisoning in Zamfara State and is currently treating 100 more. 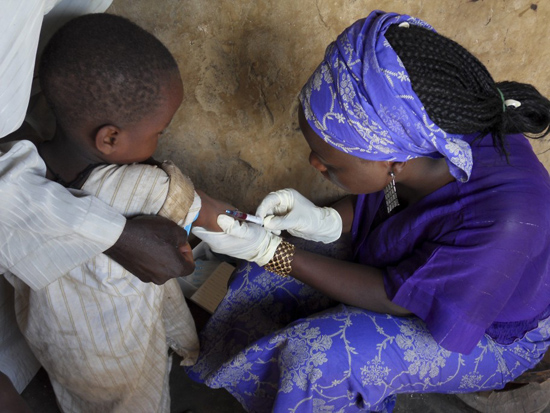 A MSF staff member tends to a young boy in Zamfara State.

Earlier this year,  lead poisoning was confirmed among children and adults living in five villages in Zamfara State in northwestern Nigeria. Since early June, Doctors Without Borders/Médecins Sans Frontières (MSF), in collaboration with the Ministry of Health, has been providing emergency treatment for children under five years of age and breast feeding mothers, the two groups most vulnerable to the affliction.

These instances of lead poisoning are a consequence of small-scale gold mining in the villages. In an attempt to extract gold from ore rich with lead, miners crush and dry the ore, often inside their own homes. The soil and in some cases the groundwater get contaminated, putting residents at greater risk. MSF staff who had been alerted to the situation took samples from some of the villagers this summer and sent them to labs in Europe, where lead poisoning was confirmed.

MSF is currently providing chelation therapy for the most vulnerable patients, most of whom are children, from three of the affected villages and will continue to treat children in the coming months. More than 100 are currently undergoing treatment. To date, more than 400 children have completed treatment in care centers opened by MSF in the towns of Anka and Bukkuyum.

The treatment is only effective if patients do not return to contaminated sites. Doing so would put them at risk of recontamination. However, remediation, or decontamination that involves the removal of affected soil, is a lengthy process that had to be halted in August due to heavy rains (remediation is being done by an environmental clean-up agency called Terragraphics). And the discovery of two more contaminated villages could indicate that Zamfara may be facing a much broader problem than originally thought.