Nigeria: Providing Care in the Slums of Lagos

MSF is providing free medical care in the Lagos slums, where people struggle to make a living in overcrowded conditions and few can afford to see a doctor. 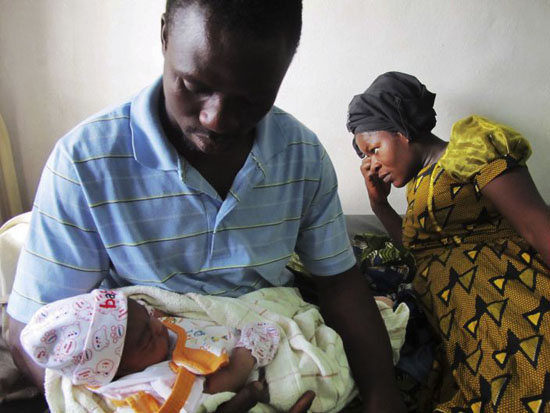 Parents with their newborn child at the Aiyetro Health Center in Makoko.

It is still early morning, not yet 7 AM, but dozens of people are already waiting at the gates of Aiyetoro health center, in the slum area of Makoko, for the day’s consultations to begin. Paul Gidonu is one of those standing patiently in the queue. Two days earlier, he'd cut his ankle while chopping wood. Although he bathed the wound at home and applied medicinal plants, he was still in a great deal of pain and the injury was not healing.

The health center has been open for only three months, but local residents like Paul already know it as a place to receive free, high-quality medical care from trained professionals. His assessment is echoed by others waiting at the gate.

Makoko is one of the most deprived areas of Lagos, Nigeria’s—possibly Africa’s—largest city, with an estimated population of 18 million. Thousands upon thousands of people live in slum areas, places where conditions are unsanitary and basic infrastructure and services are lacking. Seeing a doctor in the slums can be extremely difficult; even public hospitals require some payment for care. That is why MSF decided to launch primary and reproductive healthcare projects in the slums of Makoko, Otto and Badia. 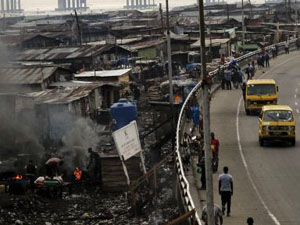 The Makoko slum in Lagos.

Medical Care for the Poorest

MSF started working in Aiyetoro in early July, providing primary and reproductive healthcare, along with inpatient and emergency services. In the three months that followed, teams carried out more than 12,000 consultations. Malaria and respiratory infections are the most common illnesses in Makoko. Patients who need more specialized care are referred to local hospitals.

“The problems we are seeing in Lagos are what you would expect for a rural area without an adequate health infrastructure [that is] invisible to the eyes of the state,” says Brett Davis, MSF’s head of mission in Nigeria. “These include complicated cases of malaria, respiratory infections, diarrhea, malnutrition and trauma, as well as low coverage of vaccinations, an absence of antenatal services and a lack of safe, hygienic facilities in which to give birth.”

There is quite clearly a great deal of need. Soon after the center opened, 28-year-old Blessing Abubakar became the first woman to receive neonatal care from MSF teams there. Three months later, when her labor pains began, she and her husband went directly to Aiyetoro. She was admitted to the maternity ward at midday; four hours later, she gave birth to a son, Muhammad.

Neonatal and maternal care are in short supply in Nigeria, a country with one of the world’s highest maternal mortality rates. Many pregnant women give birth at home because they are unable to afford the cost of going to hospital. Many pay traditional birth attendants to help with the delivery, while others go to churches, which sometimes have their own medical staff. Since MSF opened its center in Makoko, the number of women coming for antenatal care has grown and grown. These days, nearly 40 women receive antenatal care at Aiyetoro every day, and demand is still increasing.

Children, too, are in need of care. A woman named Flora began raising her niece, Caroline, when the child was just one day old. The baby had survived a complicated delivery that had killed her mother but was not well. After three months, Caroline still weighed less than eight pounds and had problems feeding. The family took her to a series of traditional healers and even to neighboring Benin searching for someone who could help. But nothing worked. 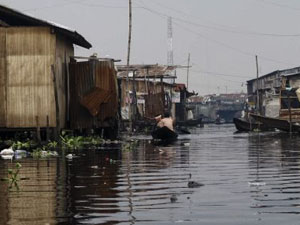 One of Lagos's "floating slums," where MSF is running a mobile clinic.

Then Flora took the Caroline to see the doctors at Aiyetoro. “She was given therapeutic milk and straightaway she started to improve,” says Flora. After 10 days in  the health center, Caroline was referred to a long-term malnutrition treatment program at the local children’s hospital. She was admitted for a month. After Caroline was discharged, Flora brought her to Aiyetoro each week to have her weight checked and her progress monitored. Now six months old, Caroline is thin but strong and lively, and she smiles often. “We thought nobody could help her,” says Flora, “but MSF did.”

Many Needs, Many Challenges

MSF is extending its reach by running mobile clinics to three other areas of the city. On October 6, the first mobile clinic was held in the slum area of Otto. Already, 315 patients have been treated there, and 90 antenatal consultations have been carried out. In Badia, MSF is working to reconstruct a small health post where medical activities will start before the end of the year. MSF is also building a small floating health center on the lagoon in Makoko, where doctors will see patients twice a week.

Lagos itself continues to grow as well, its population swelling with migrants from rural Nigeria and immigrants from neighboring countries such as Benin, Ghana, and Togo. Additionally, many would-be migrants to Europe start their journeys in Lagos. Most of them wind up in the slum areas.

“The number of people seeking access to our facilities is staggering," says Davis. "Keep in mind that an estimated 2,000 people arrive in Lagos each day. Meeting people’s needs in a densely populated area is an incredible challenge, but it is also an opportunity to help people who really need it.”

The MSF team in Lagos is mostly made up of Nigerian medical staff, supported by eight international staff. The team plans to support Ministry of Health facilities in the country for a period of two years.