An MSF project coordinator reflects on her recent mission in Masisi, in DRC's North Kivu Province, where MSF had to suspend activites late last year after a violent attack on its compound. 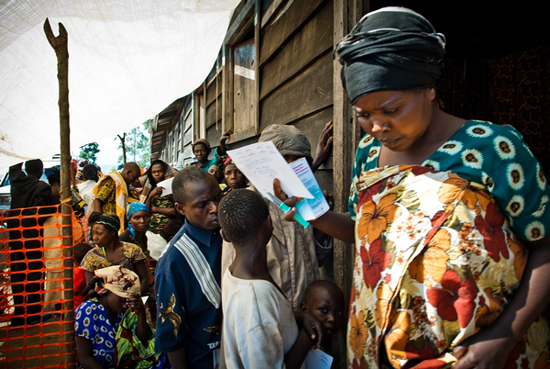 Patients wait at an MSF facility in Masisi, where activities have resumed after a 2011 attack.

At the end of 2011, Doctors Without Borders/Médecins Sans Frontières (MSF) was the target of a violent attack in Masisi, North Kivu, in the east of the Democratic Republic of Congo (DRC). This incident forced the organization to reduce its teams between that November and April of this year. Activities have resumed, but the security situation remains tense. Anna Halford, returning from a four-month mission as a project coordinator in DRC, reflects on the work MSF does to help people enduring daily violence.

After the attack last November, how did MSF start its activities up again?

Immediately after the attack we reduced the project to several fixed activities with supervision maintained from outside the project. We were mainly working in the hospital and in two health centers, while all our peripheral activities, like mobile clinics, ambulances, and referrals were suspended. We also stopped all public health promotion beyond a 5 kilometer [about 3 mile] radius.

"Even if we don’t necessarily see violent attacks, we see the consequences of this conflict every day."

The goal was to [eventually] restart the full set of activities, and we’ve done that. The whole supervisory team has returned, all positions are filled, and we have even opened new ones. Today, our team consists of 10 to 15 international staff and about 70 national staff.

Starting up our activities again was relatively easy as our teams kept things ticking over at the hospital. Some health centers went through a tough period because they could no longer rely on the ambulance, but now people are coming back.

How has the situation changed in the last few months?

The general situation hasn’t improved. We’re working with communities that suffer an enormous level of violence. Widespread violence has become hopelessly commonplace. People here almost see it as normal. There is constant extortion by the armed groups. Going to the market to sell timber, or coming back from the market, it’s normal to have to pay. It’s normal to be robbed.

People prepare for it. For example, they travel without taking all their kids with them so that they don’t all get attacked at the same time. When they’re sick, people prefer to wait instead of going to the closest health post. They worry about going out, abandoning their fields, or leaving their children at home. And once they get to the clinic, it’s sometimes too late.

Even if we don’t necessarily see violent attacks, we see the consequences of this conflict every day: women in labor who arrive too late, injured people who have waited four days in the forest to avoid armed groups, running the risk of their injuries worsening . . .

What medical conditions are you seeing at the hospital?

Diarrhea, malaria, gynecological and obstetric problems, and malnutrition. There are chronic illnesses, like congestive heart failure and diabetes, but most are illnesses that we wouldn’t normally worry about in Europe [or the United States], like respiratory infections or measles, which do not necessarily kill. But with a poor health system and a context of constant violence, these infections can have serious consequences.

"The patients’ needs come before everything."

It’s unjust that children are still dying of measles, but how do we vaccinate them when it’s impossible to reach certain areas? There are no easy answers, but I still find this appalling. The same for malnutrition. The soil is so fertile there that you can drop anything on the ground and it’ll grow. There shouldn’t be any malnutrition. In the MSF hospital, more than a quarter of our surgical work is devoted to trauma linked to violent attacks. That requires a lot more time than a routine Caesarian section, for example. When these kinds of cases take up more than half the day, what do the other patients do? The effects of this violence are huge.

How does MSF work in such a context?

By maintaining a dialogue with everybody. We are creating a network that should help us to be accepted there: "I know that man. His wife came to the hospital, and I know her through a friend of a friend." We keep up that dialogue at all times, even if it’s tiring. Sometimes you have to answer the same question a thousand times to a thousand people.

Of course, there’s our unchanging bedrock principle of treating everybody without discrimination. The fact that we don’t charge for the care we give is also key, as many people here are not able to pay for health care. Outside the MSF facilities, they have to come up with five or ten dollars for a minor surgery, and for most people that’s a real struggle. And also, the high quality of the work we do and the clear resources we put into our work give MSF a good name.

The needs are obvious, and that’s what keeps our teams motivated. They stay solid because they do good work. The mobile clinics allow us to reach the patients that are too scared to travel. One month, out of 330 births that we assisted, 320 babies lived. In the rest of Kivu, the mortality rate is dreadful. It’s incomparable.

We know that we’re helping people and we try to help the largest number of them we can. We find seriously ill children during our mobile clinics, and our first thought is to bring them back to Masisi for treatment, and the question of where to put them only comes later. The wards are full? Not a big deal, we’ll put another mattress on the floor. And our logisticians battle with problems like seeing if it’s possible to put a third child on one oxygen machine, because the medics are saying it simply has to be done.

It’s a kind of medical utilitarianism: the patients’ needs come before everything. And people appreciate it: at a checkpoint, a man always gave us bananas because we saved his leg. They show us their babies in the street, and they remind us that the birth was difficult but that they’re still there.

At the project in Masisi, MSF performed 105,681 medical consultations in 2011. In the Masisi hospital, 7,226 inpatients were admitted for hospital care and 3,947 women gave birth for free. In North Kivu, MSF is also working in Walikale, Mweso, Pinga, Kitchanga, Nyanzale, and Rutshuru.