Northern Nigeria: Reaching Those Most in Need of Care

In August, a Doctors Without Borders/Médecins Sans Frontières (MSF) team traveled to Bama, a town 75 kilometers [about 47 miles] from Maiduguri, the capital of Nigeria’s Borno State. Bama is on the front line in the conflict between the Nigerian army and Boko Haram. Here, MSF project coordinator Hakim Khaldi describes the living conditions for thousands of displaced people in and around the town—and the emergency assistance delivered by MSF.

Why did MSF organize an emergency operation in Bama?

A commercial hub on the road to Cameroon, Bama used to be rich, but it’s a ghost town now. Several months ago, its inhabitants fled and took refuge in the state capital, Maiduguri, because of the conflict between Boko Haram and the Nigerian army. Boko Haram fighters aren’t far off, just a few kilometers from Bama.

All you see in Bama these days are displaced people who’ve been forced out of nearby villages. They’re living in a camp under military control; the Nigerian army has a base in the town.

It’s estimated there are 15,000 displaced people in the camp, mostly women and children under the age of five years. They live in makeshift shelters made out of iron sheeting taken from houses. These people can’t provide for themselves, so they’re totally dependent on outside help for food.

We went back to Bama on August 17 for an emergency operation. The aim was to reduce morbidity and mortality in children under the age of five years by providing them with enough treatment and food for one month, so we brought in therapeutic food for malnourished children (Plumpy’Nut®) as well as food rations (beans, oil, and BP5 fortified biscuits, a high-calorie food product commonly used as emergency food rations).

During our operation, which lasted four days, we stayed overnight in town outside the camp. There was a curfew from 6:00 in the evening to 7:00 in the morning and no electricity in the house the [Nigerian] army lent us.

On the first day, we began work at 7:00 in the morning. The queue of people waiting was so long we couldn’t see the end. There were huge lines of women and children. We screened and treated children suffering from malnutrition and distributed food to families with under five-year-old children.

We’re planning to go back to Bama twice over the next two months to provide treatment and distribute one month of rations again. But this kind of operation isn’t easy to manage. It can’t be done without coordinating with the Nigerian army. And, we’re not free to move around as we want. For security reasons, we—the team—have to travel by helicopter from Maiduguri to Bama, and an army escort is required to accompany trucks transporting food and drugs. 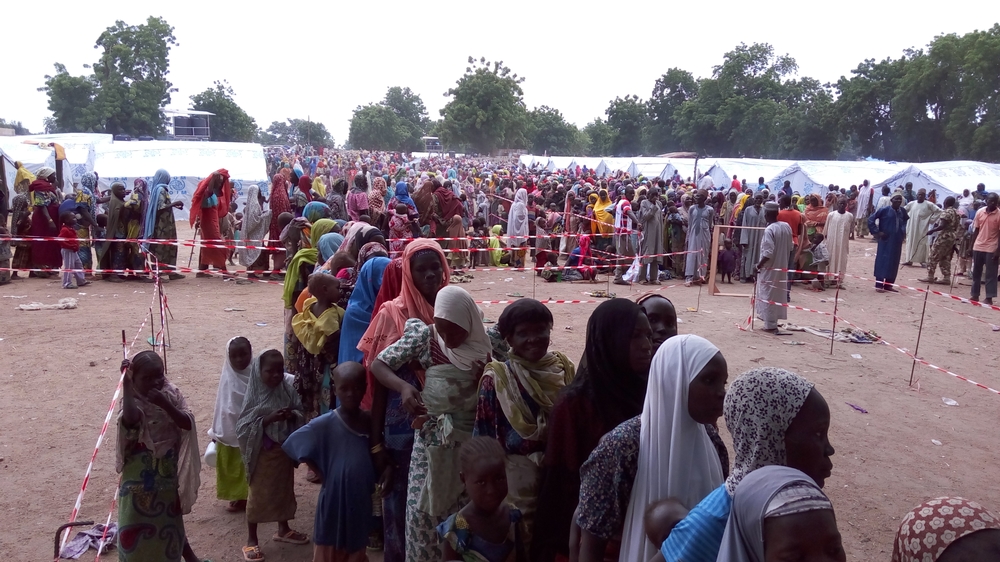 Malnutrition is the biggest. During our operation, we examined a total of 3,293 children under the age of five years and treated 513 for malnutrition. In other words, 15.1 percent of children were suffering from malnutrition, and 4.2 percent of these from severe acute malnutrition.

Despite appearances, that’s a slight improvement on our previous visit on July 13, when we distributed therapeutic food. We saw an alarming situation, and a rate of severe acute malnutrition of 15 percent was recorded.

As for the other issues, the three main pathologies we observed during medical consultations were malaria, skin infections, and diarrheal disease. The number of malaria-carrying mosquitoes is increasing now the rainy season has started.

There’s a clinic run by the Ministry of Health and UNICEF in Bama but very few patients go because it doesn’t have enough drugs. And, a couple of weeks ago, the Nigerian air force opened a small hospital at the entrance to the camp. But people aren’t rushing there either.

We distributed bed nets to prevent the risk of malaria. But the problem of shelter is nowhere near being resolved. Most families live in shelters put together with rusty iron sheeting and the rain leaks inside. Some have got plastic tarpaulins and tents now, but, as they don’t have windows, they’re horribly hot.

During our operation, we saw around 40 women and children arrive. They couldn’t find any shelters in the camp so they had to set up on mats on the bare earth.

In view of these exceedingly precarious living conditions, MSF has submitted a request to Borno State’s health authorities to vaccinate the camp’s inhabitants against measles, pneumonia, and cholera. The consequences can be fatal when one of these diseases comes on top of malnutrition.

Access to water is another of the camp’s problems. Only seven of nine wells actually work so there’s not enough water to go round. Several organizations are providing assistance to the displaced in Bama, but this assistance is still patchy and not enough to cover everything that’s needed.

"On the first day, we began work at 7:00 in the morning. The queue of people waiting was so long we couldn’t see the end. There were huge lines of women and children. We screened and treated children suffering from malnutrition and distributed food to families with under five-year-old children."

There are an estimated 15,000 people in Bama camp – most of these people are women and children under the age of five. People are living inside a camp surrounded by the Nigerian army. Boko Haram fighters are stationed a few killometres away from Bama camp, the town is empty, and it is like a ghost town. The only people who remain in Bama are inside the camp. We returned to Bama on August 17th to carry out our emergency response. We reached a total number of 3,293 children under the age of five. We treated 513 malnourished children (4.2% have severe malnutrition and 10.9% have moderate malnutrition). Our operational aim was to reduce morbidity and mortality among children under the age of five by providing treatment and food for one month. We took Non Food Items (mosquito nets, soap), therapeutic food for malnourished children (plumpy nut) and a food blanket ration targeting malnourished children’s household (oil, emergency food, rations and beans). We started our distribution at 7am and there were people as far we could see. There were lines and lines of women and children. We screened the children for malnutrition as we distributed the items. Our operation strategy is to return to Bama every month for the next two months. There is an Outpatient clinic run by the Ministry of Health and UNICEF but very few patients go to the clinic because there are not enough medicines there. In addition the Nigerian Air Force opened few days ago an hospital in front of the camp’s entrance. Most people in the camp live in make shift corrugated iron shelters – with sheets of metal not offering much protection against the rain or elements. Now some people have plastic sheeting on their shelters and tents but there are no windows so it’s very hot inside these shelters and they’re not sustainable. There is also an issue around water. There isn’t enough water for the number of people in the camp. here is nine bore holes in the camp and only seven are functioning, this is not covering the needs of the 15,000 people in the camp.
Hakim Khaldi/MSF