A large-scale malaria prevention program appears to be drastically reducing the number of new cases of the disease among young children during peak transmission season. 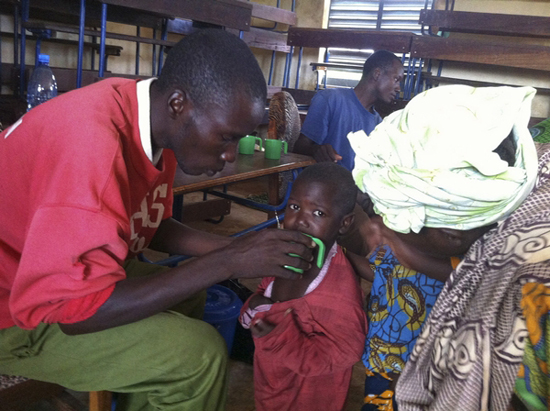 A health worker administers preventive malaria treatment to a child in Koutiala.

BAMAKO, MALI/N’DJAMENA, CHAD/PARIS/NEW YORK, SEPTEMBER 24, 2012—A large-scale malaria prevention program, consisting of intermittent distributions of anti-malaria medicines, appears to be drastically reducing the number of new cases of the disease among young children during peak transmission season, according to preliminary results from projects run by the international medical humanitarian organization Doctors Without Borders/Médecins Sans Frontières (MSF) in two African countries.

Antimalaria medicines have been administered prophylactically to approximately 175,000 children between three months and five years of age in Koutiala District in southern Mali and in two areas of Moïssala District in Chad, through an intervention known as seasonal malaria chemoprevention (SMC). Children in that age group are among the most vulnerable to death from malaria due to weaker immunity. Preliminary results show more than a two-thirds drop in the number of simple malaria cases in the intervention area in Mali and up to an 86 percent drop in Chad. A significant decrease of cases of severe malaria is also being recorded.

"While we need to continue evaluating the broader impact of SMC, in terms of its overall effect on a population’s health, the initial results of our intervention show a spectacular decrease in the number of malaria cases,” said Dr. Estrella Lasry, a malaria specialist at MSF. “The bottom line is that we are seeing a correlation with our intervention: more than half the beds in the pediatric ward of the hospital in which we work in Mali are empty, something we have never seen in prior years during peak malaria season, when bed occupancy was typically over 100 percent.”

The World Health Organization (WHO) recommended SMC in March, 2012, based upon research carried out in multiple countries in the Sahel region of Africa that experience high seasonal malaria. The intervention consists of the intermittent provision of a full course of treatment of an anti-malaria medication during peak malaria season, with the aim of preventing new cases of malaria. Different drugs are used to treat people in the area who test positive for malaria.

The MSF projects were launched in July and will last until October, the period of high malaria transmission, and mark the first time MSF has carried out a large-scale SMC program. Some 165,000 children in Mali and 10,000 in Chad take a total of three tablets of amodiaquine and one of sulphadoxine/pyrimethamine over a three-day period once a month. Children who are ill at the time of a distribution, and who test positive for malaria, receive artemisinin-based treatment and are excluded from that month’s distribution.

The areas in Mali and Chad were tested for resistance to the SMC drugs prior to the initiation of the intervention. No resistance was discovered among the representative sample tested. Further resistance surveys will be conducted periodically in Koutiala and Moïssala .

In Mali, MSF teams observed a 65 percent drop in the number of simple malaria cases in the weeks following the distribution of treatment. Additionally, the number of malaria-associated hospitalizations plummeted from an average 247 per week to 84. In southern Chad, results were equally encouraging; in two health zones in Moïssala, the decrease in the number of simple malaria cases was between 72 percent and 86 percent, compared to cases recorded in the weeks prior to the first SMC distribution.

"This prevention strategy could be an extraordinary public health tool, particularly for protecting children, who account for the vast majority of malaria deaths,” said Dr. Lasry. “We can draw on our projects in Chad and Mali to assess the feasibility of employing this strategy in other contexts.”

Additional malaria prevention methods, such as bed net distributions, insecticide spraying, and adequate diagnosis and management of malaria must continue to be supported and implemented in endemic countries, MSF said.

According to the WHO, an estimated 650,000 people die from malaria every year. Ninety percent of cases occur in Sub-Saharan Africa, mainly among young children.

MSF is running projects for the treatment and prevention of the most deadly diseases in young children in Mali and Chad. Since the beginning of 2012, more than 12,000 people have been treated for malaria as outpatients and 3,500 sick and/or severely malnourished children have been hospitalized in Koutiala district in southern Mali. In the Moïssala district in Chad, more than 18,000 people have received malaria treatment in MSF-supported facilities or from non-medical health workers in villages who have been trained by MSF.