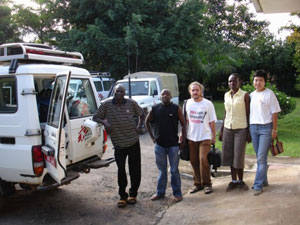 MSF pharmacist Alison Wong (far right) stands with members of MSF's HIV program staff outside the building where they were housed in Arua, Uganda. 2006 © Alison Wong

Alison Wong was the pharmacist for the Doctors Without Borders/Médecins Sans Frontières (MSF) HIV/AIDS program at Arua Regional Referral Hospital in Uganda from September 2005 to October 2006. MSF began the program in 2001 to provide antiretroviral (ARV) treatment to people in the region living with HIV. It has grown to include treatment for people co-infected with HIV and TB, and to establishing better decentralized care.

"The HIV project is a cooperative, or integrated, program with the Ugandan Ministry of Health (MoH). MSF has an outpatient HIV clinic inside the hospital, and if a patient is sick, or sick enough to be hospitalized, then we would admit him or her to the hospital, which is run by the MoH.

Mainly, my responsibility was dealing with the management and logistics of the supply chain: inventory, stock control, and collaborating with the Ugandan logistics advisor for the HIV program. I was like a messenger, a link between the field and the capital, in terms of bringing their attention to supply issues, schedules, and delays. And in working out the problems that the local health centers would run into in terms of not being able to get their shipments or not being able to send their orders.

We have patients referred to the local health centers because some of them live quite far away and they're not able to make it to the Arua clinic on a monthly or periodic basis. So, if they are stable, we will just refer them to the local health center that has an HIV program where we don't provide medications, but we do provide technical support.

In order for the patients to be able to follow their regimen in the local health centers, we have to make sure that those centers do get a steady supply of HIV medication from the government. So one of my roles was to ensure that the government is providing them with an adequate stock of ARVs and, on the other hand, making sure the health centers do their job to file proper orders, do proper stock-keeping, and to make sure they do get their medications from the government on time." 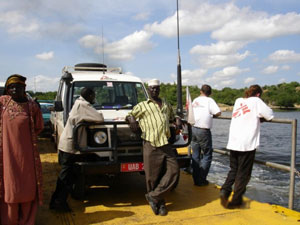 Members of the MSF HIV program staff from Arua Hospital in Uganda cross the Nile River along with some locals while traveling from Arua to the capital, Kampala.
2006 © Alison Wong

"One challenge was adapting to working on the supply and storage side – as a pharmacist from the U.S., we don't really do that. For example, one of the ARV medications is for children. It's a capsule, so we cannot cut the dose to adjust it, based on their body weight. So, a doctor asked me to order oil suspension. At the time, I didn't think much about it, I just ordered. But when I received the shipment, I realized that, although the product itself can be stored at room temperature, after you add water, it has to be kept in the refrigerator, which can be hard to come by in more rural parts of Africa.

So it kind of dawned on me that these are the things I did not really anticipate; I did not really think of ahead of time. And I guess that was just one of the limitations I had as a pharmacist from the Western world. We are not used to dealing with things on the logistics side." 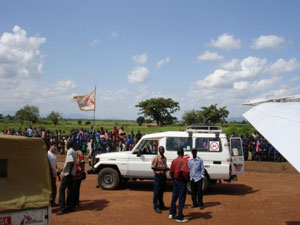 "At the clinic, we primarily dispensed first-line HIV medications and started some patients on the second-line if first-line treatment failed. Also, toward the end of my stay, we started a TB treatment program for TB/HIV co-infection. We dispensed TB medications to our HIV patients who have TB.

It was a challenge in the beginning because the logistics side of things was not worked out. There was a lot of going back and forth about whether we should dispense the TB drugs from the clinic or from the hospital itself."

"For the local health care centers where we provide technical support, I think things are going in a positive way. I worked with this particular health center for over a year and by the time I left, the manager was finally able to understand how to calculate the need for HIV medicines and place the orders properly, so I felt good about that.

I will always be grateful to my supervisor, who is a pharmacist supervisor in Paris. Her name is Sophie Marie and before I went to the field, I was able to have a briefing with her in Paris. When I arrived at the field, there were only three days of handover between me and my predecessor, so I was pretty much without any guidance for a good three to three-and-a-half months.

Finally, Sophie came at the end of January for a field visit. I was able to go with her and visit different government officials at MoH, the national drug authority, the logistics supplier, and different drug companies that supply us with medicines. I was able to get a feel for the whole picture of how the coordination works and how the field works. She was able to give me a lot of guidance that kind of pushed me. She told me what I should be doing and what was expected of me. If I had questions, she gave me clear guidance on how to approach and whom to ask.

So, after that I was able to push at least the pharmacy aspects of that project to a higher level, and that's one of the very positive experiences that I had."