Doctors Without Borders/Médecins Sans Frontières (MSF) began offering primary health care and other services in Pulka, in the northeastern Nigerian state of Borno in late 2016. Over the past few months, this small town, situated next to the border with Cameroon, has become a hotspot for people fleeing the Nigerian military operations and attacks by Boko Haram, and those in search of food and basic services.

Some displaced MSF patients shared their stories. All patients’ names have been changed.

I’m here because this little girl is sick. Her mother has mental [health] problems. I have six children and we are all here in the camp, and my husband too. We are from Bokko and we came here because we needed to get away from Boko Haram. We were living in constant fear.

We were living in the bush and only went home at night to get provisions and go straight back. We lived like this until [government] soldiers came to our village and we were able to leave [the bush]. I left my husband and daughter behind because they were not around when we were rescued [they later reunited].

We walked here, as it is not too far [from Bokko]. Boko Haram destroyed the little infrastructure there was in our village, including the health center. So, there was no way to get drugs if one was sick. The problem became worse last year and we sometimes had to sleep hungry.

Here, sometimes we get food if we are lucky enough and there is still food when it gets to our turn in the queue. If not, we have to be patient and hope to be lucky next time.We only rely on the food prepared at the central cooking points. Sometimes there is no firewood. This is a major problem in the camp.

I have seven children and they are all here in Pulka outside the camp. The others are with my husband while I’m here with this sick one. We are from Pulka town. My parents and siblings are now in Abuja, and are all alive.

My family and I fled to a village called Shokshe when Boko Haram came to Pulka and from there we fled again to Cameroon. We left Pulka when [government] soldiers were coming into the town to chase out Boko Haram. We thought it was safer to leave in order not to be caught up in the fighting.

Before then, we lived with Boko Haram in Pulka for two months but the two months felt longer. We wanted to leave but we couldn’t, as they were everywhere in the town. They didn’t want to see women outside. You couldn’t go to farm, to the stream to fetch water or to the market. All these were duties for men. It was forbidden for a woman to even peep outside. If you had to go out, you were required to wear a full niqab, which was not comfortable because of the heat.

Boko Haram had this big compound where they locked women up in cells for breaking any of these laws. There was no toilet or bathroom there and nobody was allowed to give you food. The women had to defecate and urinate inside their cell and the only way to escape was by climbing over a wall with the help of an inmate.

When [Nigerian] military planes started bombing the town, we fled to Shokshe and stayed there for 20 days before going to Cameroon. We only stayed in Cameroon for 15 days before returning to Pulka and we have been here since. In Cameroon, it was a struggle getting food to eat because we had no money. I cannot explain how we survived but I know that there were days we slept hungry. 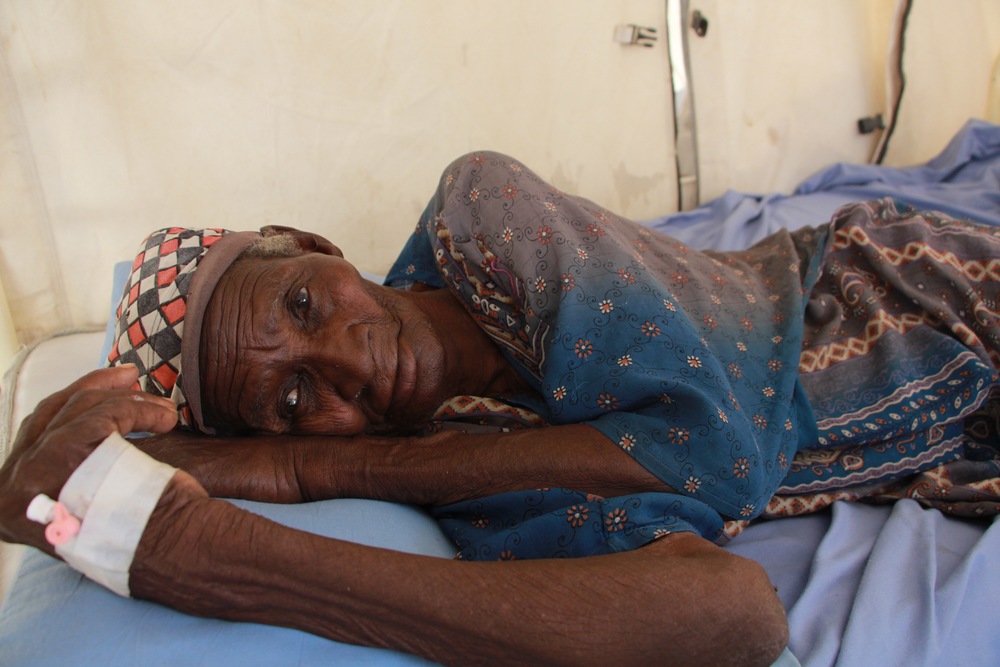 I had two children but only one is alive. I came [to Pulka] with my daughter from Barawa about a month ago because of the insurgency. I spent three days on the road with my daughter strapped to my back. It was difficult to keep up with the other people we were travelling with. I had to keep walking because they would not wait for me to rest.

My mother is here in the camp as well. She and the rest of the family are also internally displaced. My father was taken by Boko Haram along with eight others and killed about a year ago. Boko Haram accused us of being infidels and doing things wrongly. They prevented us from leaving.

When we first came here, it was difficult because of the lack of water and people were very thirsty. Now, there is water but there is a problem of firewood. It is difficult to get firewood to cook and that is why sometimes people go hungry despite there being food in the camp. There are also not enough toilets.

I was a tailor back home, but I left everything behind. I couldn’t take anything with me, just the clothes I had on. When the soldiers come to a village and they are going to rescue people, they just gather you all, screen you and take you out. You have no chance to take anything.

Some parents had no time to get their children, especially if the children had gone out to play or were running errands. Some children also are taken without looking for their parents. There are so many children without parents, not because the parents were killed but because they were separated during rescue operations.

I have six children, one girl and five boys, and they are all here in Pulka. My husband died when Boko Haram attacked Gwoza. I am from Ngoshe and we first came here one week after fasting last year, but my uncle took us to Maiduguri. We have just returned.

We had to leave Ngoshe after Boko Haram kept coming to ransack the place. Some people managed to flee, but others couldn’t because Boko Haram blocked all the exit points and killed anyone caught trying to escape. Boko Haram burned down the market in the village, and people’s houses, and their food.

In Maiduguri, I lived with my elder brother for three months but things were not easy there in terms of food, so I moved to Bakassi camp [for internally displaced people]. There, it was better, as food and other items were distributed. Even though they were not regular, it was better than the situation we were in before.

I decided to come back [to Pulka] because there were not many people from my village in the camp, which made it difficult to settle in. My mother is still with Boko Haram. She was taken to the top of the mountain when soldiers chased Boko Haram from our village. Recently, I heard from some women who escaped that she was still with them. She is very old and maybe she cannot escape. We also heard from the people that seven men had attempted to escape earlier but were caught and killed. It worries me that my mother is still there and I don’t know what state she is in. 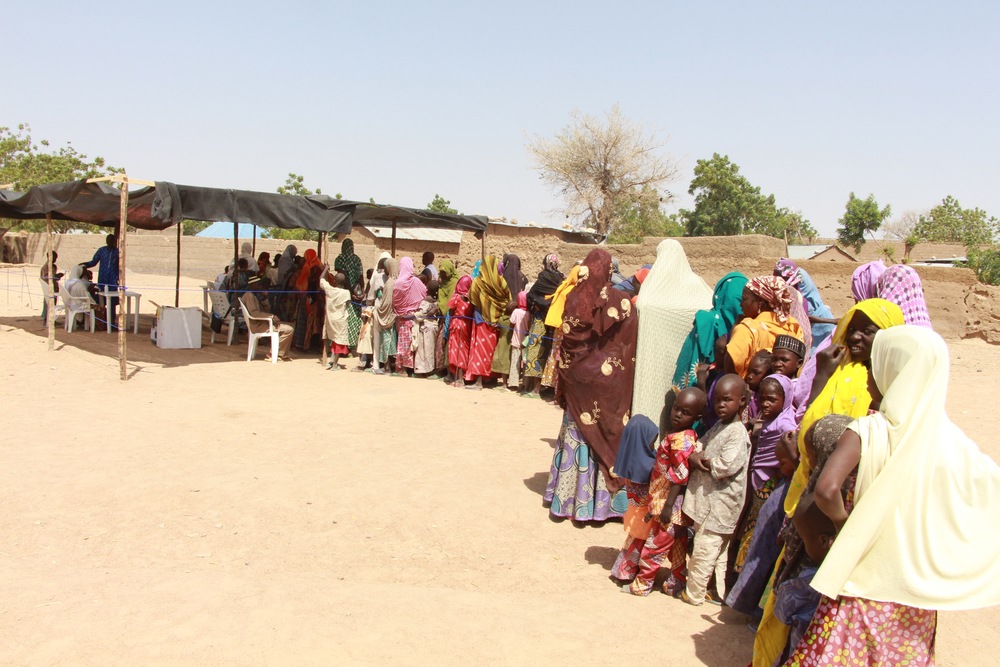 I have seven children but only three are here [in Pulka] with me. Three died a long time ago from sickness and one is in Mubi. My husband has been in Lagos working as a watchman for the past three years. We speak by phone and he is fine.

I am from Jimini village near Kirawa. I was in Kirawa with my children for two years because of Boko Haram. In Kirawa, our main problem was the lack of food.

My father has been in Cameroon for more than five years. He crossed over from Nigeria immediately when Boko Haram started to harass people. Some of my siblings are there as well, but my elder brother is here in Pulka and my elder sister is in Lagos with her husband.

In Cameroon, there were rumours that they would take us to Banki and we didn’t want to go there because we are not from that area. This was one of the reasons why we decided to gather together and come to Pulka. They were rounding people up and taking them to somewhere we did not know, maybe to Banki or Bama. We saw this as a sign that we were not needed in the country. So, we had to leave before they would force us into vehicles to a place different from here.

We had been thinking of coming back home. So, even if they did not force us out, we would still leave, as that was not our country. My wish now is to get enough food to feed my children, shelter, and money to start up a little business. I also want my children to join the army and for one to become a medical doctor. Anytime I pray, I include my children’s future in it.

[I am] from BokkohideI. [I had] two children but one was killed by Boko Haram and the other one is in Maiduguri. I came three weeks ago and live with my sister in this camp.

Back home, I was able to farm a few beans, groundnuts, and guinea corn, but when Boko Haram came, they took everything. When Boko Haram’s harassment became too much—they would come in the morning and leave in the evening—we decided to hide in the mountains whenever they were coming.

I depended on some children in our village to help me get to the mountain. Even though they were not after women and little children, everybody would run to the mountain or the bush. They were interested in getting the young to join. They wanted them to join them but those who refused were killed.

On the mountain, we survived on fruit we found there, and whenever Boko Haram left we would go to look for water. Also, we hid some groundnuts in the ground, so when we came down, we would dig some out and fill our pockets, then hurry back up the mountain.

Sometimes when there was nobody to help climb to the mountain, I would hide under my bed and, fortunately, they did not look there because they thought everybody had run to the mountain.

We lived like this for three years before soldiers came and helped to take us out. When the soldiers came to the village and I was sure that it was them, I came out from under the bed and went to them, so they put me in their vehicle and brought me here. The soldiers decided to burn the whole village so that Boko Haram would not live there.