For the communities of Port Sudan, discussions on reproductive health were often taboo. But with community members taking a leading role in health promotion, things are changing. 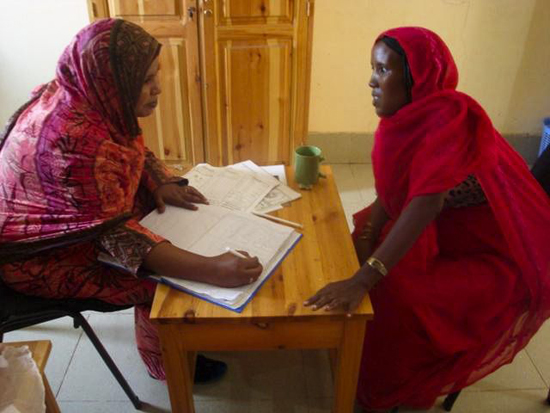 An MSF health educator speaks with a patient before her first consultation at MSF's reproductive health center in Tagadom Hospital in Port Sudan.

For the communities of Port Sudan, the capital of Red Sea State in northern Sudan, discussions on reproductive health have long been taboo. But with community members taking a leading role in health promotion, things are changing and people are starting to talk more openly.

Doctors Without Borders/Médecins Sans Frontières (MSF) medical teams are confident that the work they began in Tagadom Hospital in 2005 providing free reproductive healthcare will continue under the auspices of the Ministry of Health when they take over from MSF at the end of 2010.

Under blue skies reflected on azure, salty waves of the Red Sea, A’m (Uncle) Tita, a grandfather, health promoter, and one of the community leaders amongst the Beja people of Port Sudan, recalls the days when he was mocked and his words were not accepted.

“I was told to respect my grey hair by people because I was speaking frankly about the medical effects of female genital cutting,” he said. 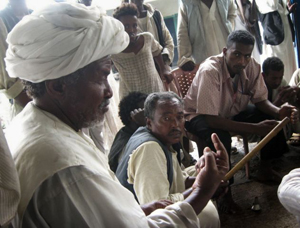 A’m Tita, left, an MSF health promoter, talks with community members in Tagadom about the benefits of testing for, treating, and preventing STIs in women before they give birth.

A’m Tita is part of the  team of 10 health promoters—eight women and two men—working in a reproductive health unit supported by MSF in Port Sudan. MSF is providing free services for the women and communities of Tagadom and its vicinities, where the majority of people do not have access to reproductive healthcare.

In the last three years, MSF’s health promoters have been knocking on doors five days a week, visiting people to discuss reproductive and general health issues in both Arabic and the Beja language. They speak with the community about the benefit of delivering babies in the hospital, family planning, breastfeeding, sexually transmitted infections (STIs), vaccinations, and the sensitive topic of female genital cutting (FGC).

The women of Tagadom and nearby areas endure the most harmful form of FGC: Type 3 or pharaonic. This involves the removal of the outer female genitals, and infibulation or the stitching of the remaining outer vaginal labia, leaving but a small hole for urine and menstrual flow to pass through. The painful procedure of FGC and infibulation is often performed on babies as young as seven days old, and it affects a female from childhood into puberty and adulthood, with serious consequences during motherhood.

MSF health promoters explain that female children and adults who have undergone this procedure may face fatal bleeding and infections such as tetanus. Also they are likely to develop cysts, experience painful menstruations, and recurrent urinary tract infections. Many women will suffer acute pain during sexual intercourse. If they give birth, their labors are likely to be prolonged, increasing medical risks for the newborn.

“We find abscesses and cysts even in female children,” said Medilyn Guevarra, MSF gynecologist. “For future newborn baby girls we explain to the mothers all the possible complications of genital cutting.”

De-infibulation, the de-stitching of the vaginal outer lips, is performed when preparing an infibulated woman for delivery. MSF’s gynecologist does not re-infibulate, or stitch back, the mother after delivery because of the grave medical consequences.

The trauma of living with FGC is great: “My organ is not complete because my family circumcised me, but now I am better because I am not closed (infibulated),” said Muzna, one of the thousands of women that chose to deliver in MSF’s reproductive health unit.

As FGC is a deeply ingrained cultural practice, MSF health promoters, who are from the same communities they reach out to, play a crucial role in transmitting medical messages on the subject. At first, female health promoters were thought of as beggars, and the team was considered indecent for speaking openly about reproductive health issues. But they were resilient in the face of strong criticism and persisted in relaying their important health messages. In time, the health promoters gained the interest of the first few people and began to form discussion groups to talk about various health issues.

“Whenever a woman comes to us and gives us her trust, we make sure we give her complete information, so she can make an informed choice about her health,” says Awadia Siddig, an MSF counselor.

Now, the community is talking about the benefits of delivering in the hospital, the medical consequences of genital cutting, STIs, and family planning with the health promoters and the counseling team. Three years ago this was unthinkable.

The health promotion team also collaborates with community members, including local imams, community leaders, and singers, to convey health-related messages or raise awareness about STIs and the harmful medical effects of FGC.

Most of the residents of Tagadom and the neighboring areas are from the Beja community. Before MSF opened its reproductive health unit—the only one in the area—the majority of the women delivered in their homes with the assistance of a traditional birth attendant. Now more and more women are coming to deliver in the hospital.

In collaboration with the Ministry of Health, MSF provides a range of free services in the reproductive health unit, including antenatal and postnatal care, delivery services, family planning, STI treatment and counseling, and other counseling services. Earlier this year, MSF built and furnished an operating theater to assist women with complicated deliveries and Cesarean section surgeries. Since January 2010, Tagadom Hospital’s medical teams conducted 54 Cesarean sections and helped deliver around 1,500 babies.

In September 2010, the Sudanese National Committee on Traditional Practices organized training sessions for the health promotion team to increase their skills. At the end of the year, MSF will hand over the reproductive health unit to the Ministry of Health, which will continue assisting the women of Tagadom and its surroundings.

MSF has been working in Sudan since 1979, and currently has projects in Warrap, Jonglei, Upper Nile, Unity, Western and Northern Bahr El-Ghazal, Western Equatoria and Central Equatoria, the transitional area of Abyei, North and South Darfur, Red Sea and Al-Gedaref states.